Website
Create a vendor selection project
Click to express your interest in this report
Indication of coverage against your requirements
A subscription is required to activate this feature. Contact us for more info.
Celent have reviewed this profile and believe it to be accurate.
We are waiting for the vendor to publish their solution profile. Contact us or request the RFX.
11 October 2017
Karlyn Carnahan
Michael Fitzgerald
Donald Light
Juan Mazzini
Colleen Risk
Tom Scales
Craig Weber

Last week we attended a landmark event - InsureTech Connect Conference 2017. This is the event that our parent company helped found with two tech entrepreneurs. They had a shared vision that the Insurance industry did not have a single place in which incumbents, insurtech entrepreneurs, venture capital firms, and regulators could come together to improve the industry. Here’s what our analysts thought.

This felt like a coming out year for insurtech. The idea that entrepreneurs and technology startups are primed to add value to the insurance industry has gained significant traction. 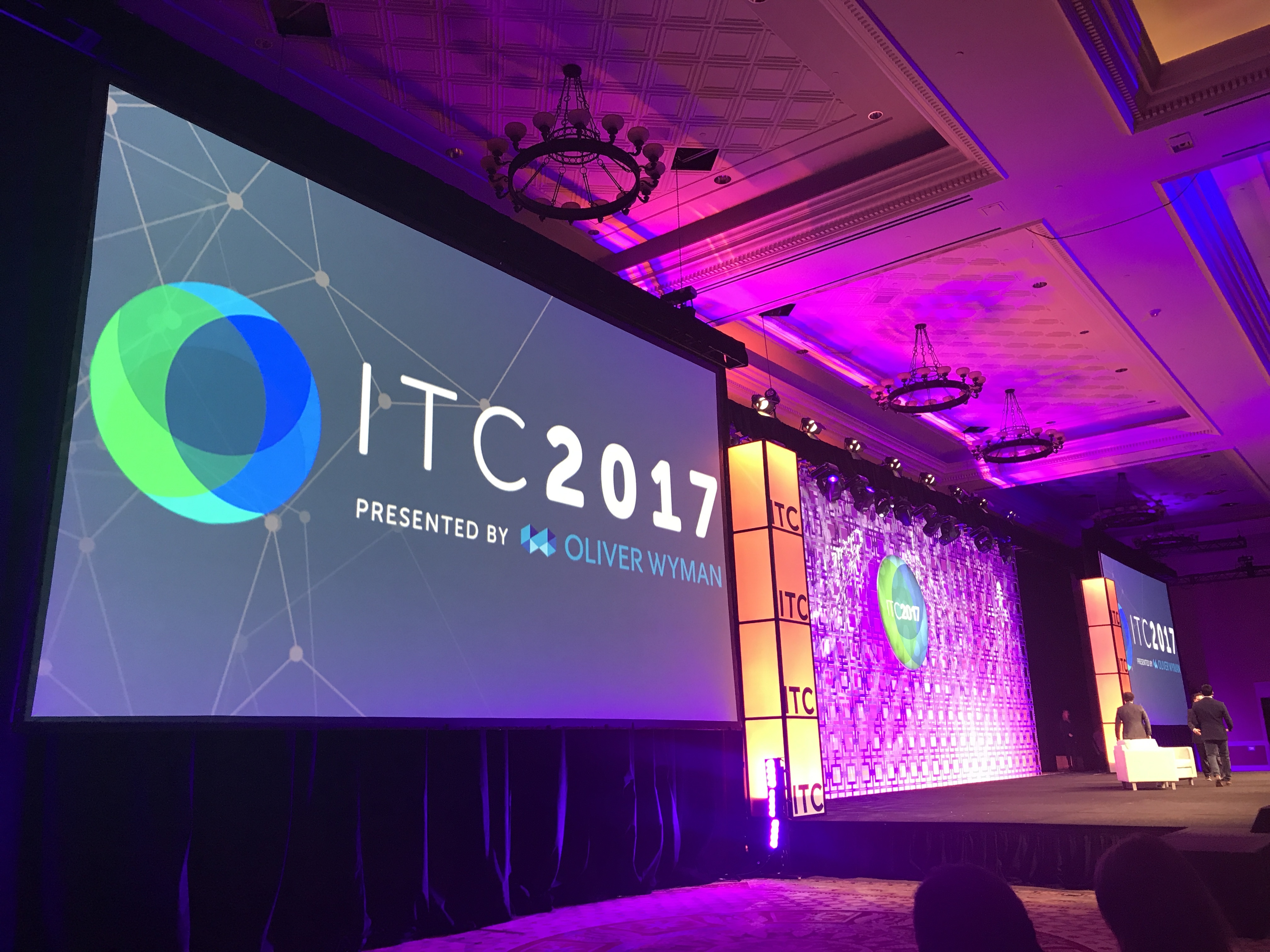 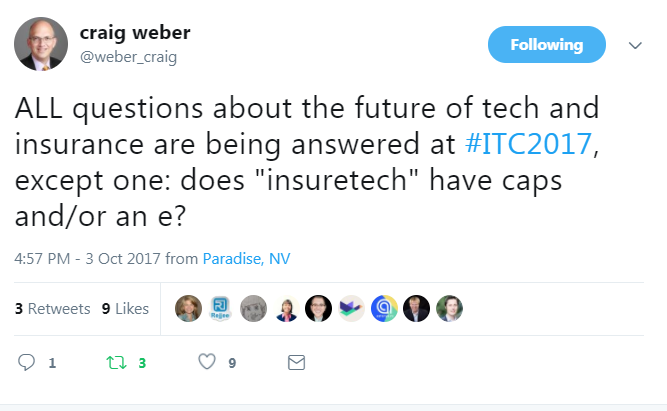 My conversations with carriers and reinsurers at the show suggest that insurtech is no longer a sideshow —the question regarding the impact of insurtech has morphed from a cynical “really?” to a well-activated “how can we make this work?”

Was some of what we saw at the show smoke and mirrors? Of course it was. But this is not a dot-com stampede. We saw any number of solutions which are ready to go today, poised to solve problems and challenge conventional wisdom. That’s probably why there were so many traditional core vendors in attendance. They are sensing, correctly, that partnership opportunities are a viable path forward.

My main takeaway From ITC was the diversity of approaches to making innovation work in insurance. 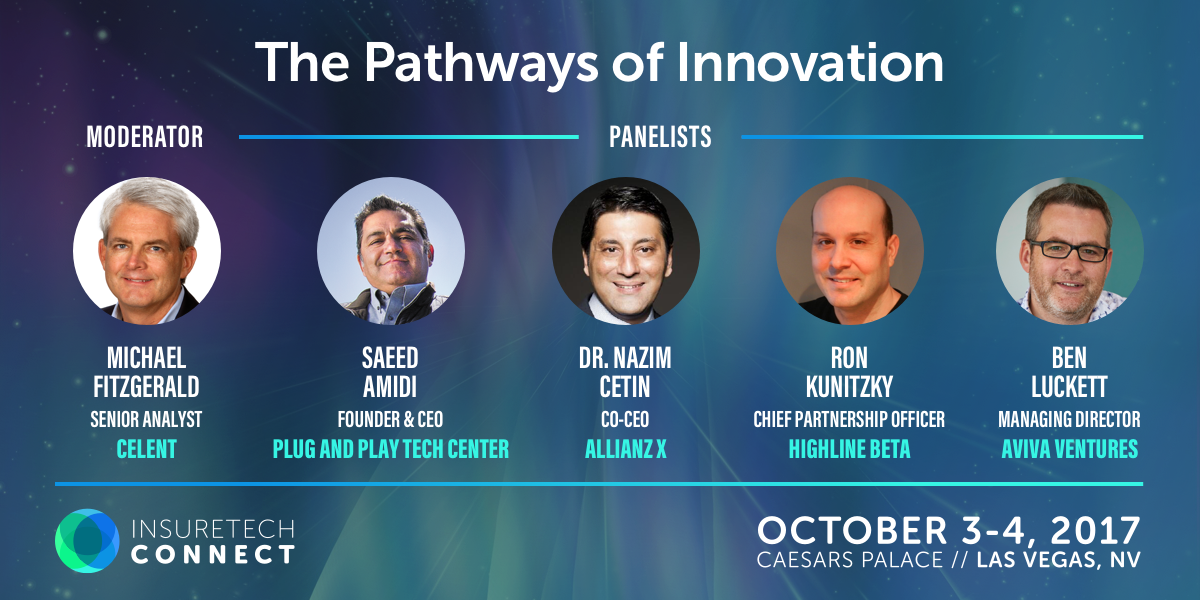 I moderated a fantastic panel of insurance innovators in the session “The Pathways of Innovation.” Saeed Amidi, Founder and CEO, Plug and Play Tech Center, Dr. Nazim Cetin, Co-CEO, Allianz X, and Ron Kunitzky, Chief Partnership Officer, Highline BETA shared their experiences in making innovation work. We covered multiple topics, including matching innovation with business strategy and creating effective partnerships between startups and insurers. The panel members’ diverse viewpoints were best displayed when they gave their views on driving successful innovation in incumbent insurers. One view held that this is best accomplished by exposing the insurer to organizations external to the industry. Another argued for a strong central program which serves business units and provides best practice to the organization. A final view held that the development of “intrepreneurs” (entrepreneurs within an established company) is the preferred tactic. 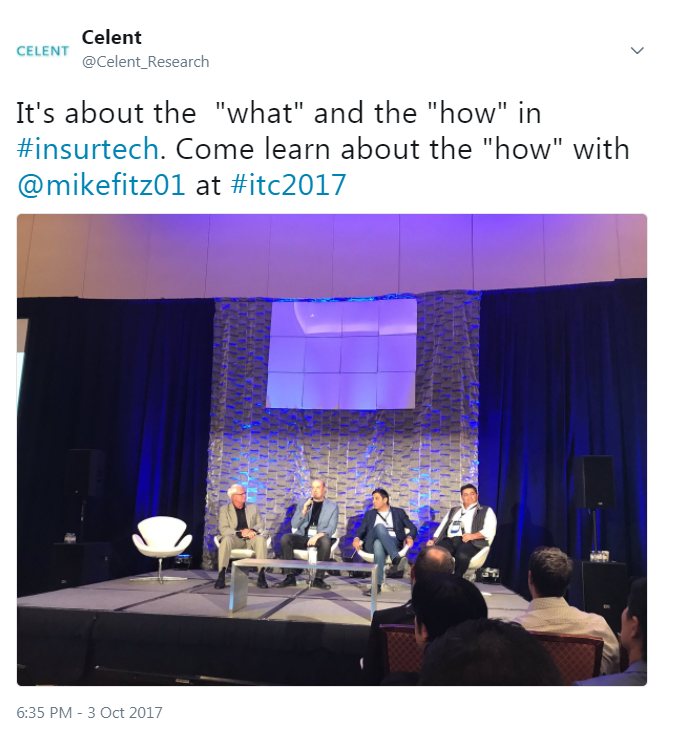 Bottom line, the best approach is about cultural fit and varies from organization to organization, confirming that there is not one size that fits all insurers.

You couldn’t mistake the buzz of innovation and the sense of speed at InsureTech Connect this year. There were new technologies and innovative business models to show off, although much of it we’ve seen in the past. Each of the startups handled some small slice of the insurance value chain. Some focused on wearables, others on drones or IoT propositions. A number are working on new distribution models, artificial intelligence or data services. It’s as if the startups are looking at insurance as a Rubik’s cube and are breaking it apart to focus on one small aspect creating a unique take on that aspect of the industry. 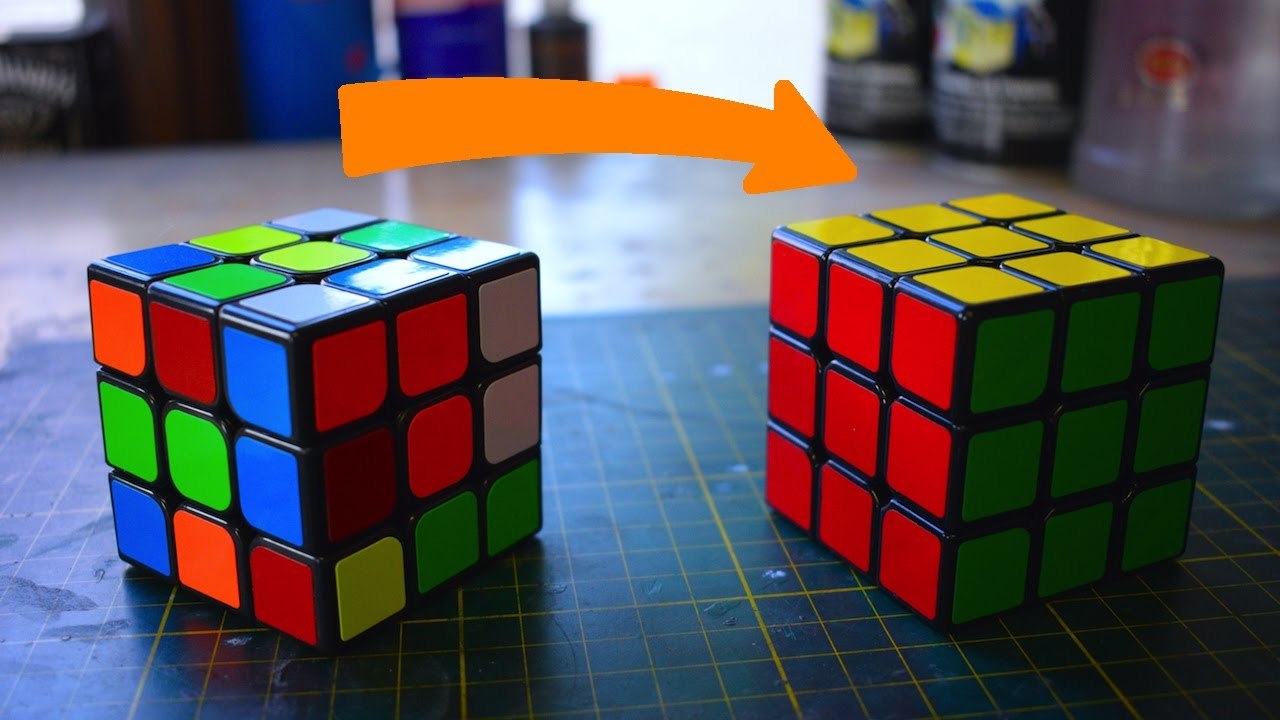 But what they all had in common was a relentless focus on how their solution can be used to improve the customer experience. Traditional core systems aren’t particularly good at focusing on customer experience. To do this, insurers need to create an ecosystem of capabilities that allow customization of the experience. These capabilities may include things like drone inspections, video communications, data prefill, multiple distribution channels, artificial intelligence, wearables, and many more.

Assembling an ecosystem of capabilities isn’t easy. Solutions have to be integrated, processes have to be aligned, and data has to be exchanged. We met with a number of system integrators, traditional software vendors, and consulting firms that are in the process of assembling their own ecosystems — identifying critical capabilities and preassembling them for easy consumption by insurers. 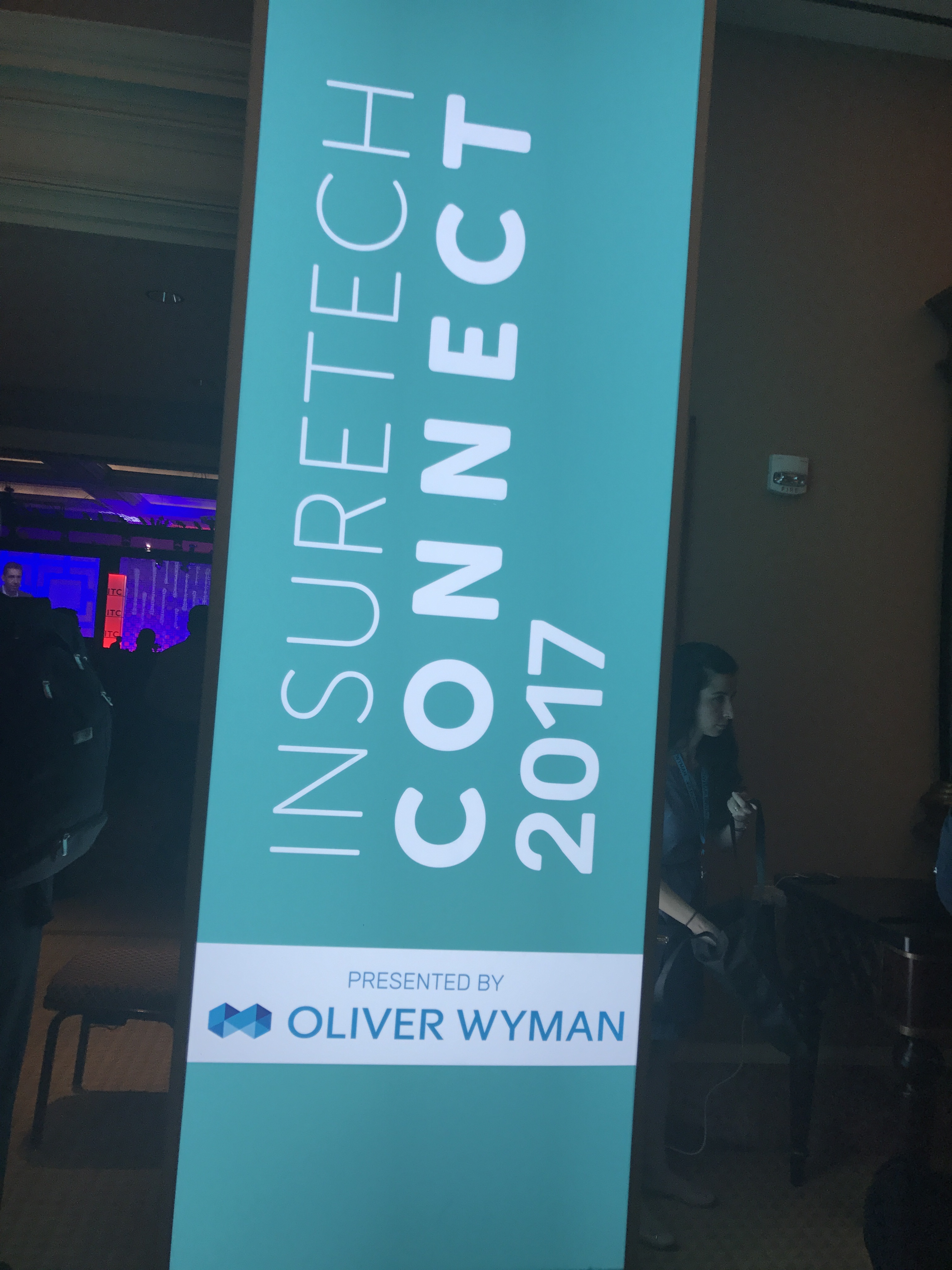 The insurers I spoke with at ITC2017 were clearly looking for new ideas. Some seemed surprised by the level of innovation and took it as a wakeup call. Others were there making their shopping list.

My biggest takeaway from ITC 17 was my surprise at seeing the large presence of incumbent core system providers, including Duck Creek, EIS, Guidewire, Insurity, Majesco, OneShield, Sapiens, and Solartis. While all of these are well-regarded, established firms, none of them would be mistaken for startups. So why were they there? 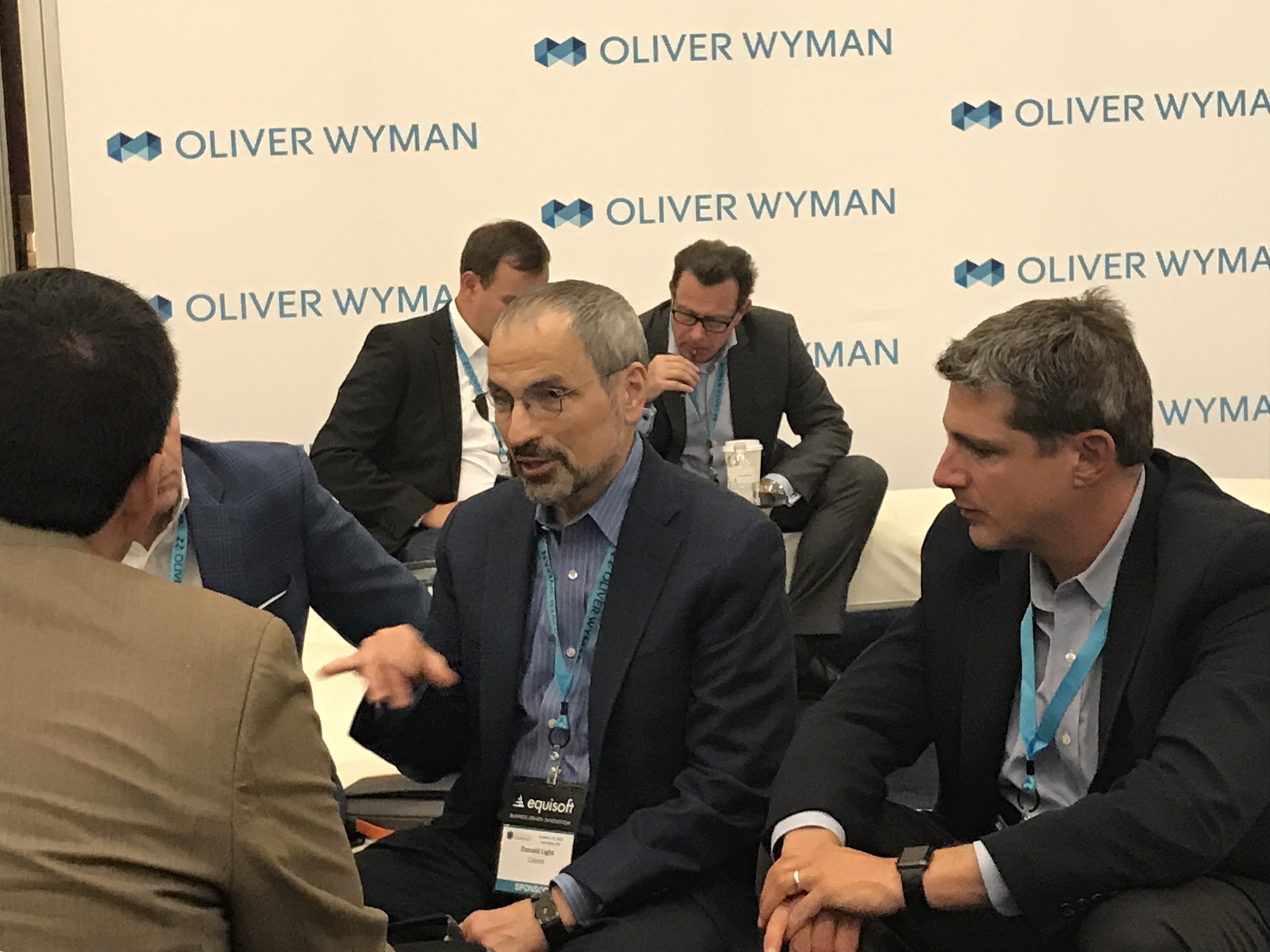 Here are a few hypotheses: 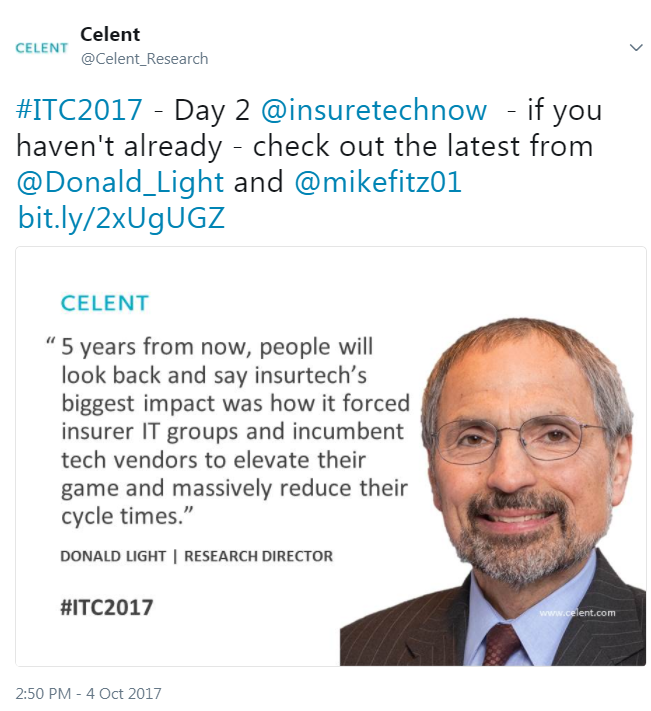 What a Difference A Year Makes - Tom Scales

Last year, after InsureTech Connect 2016, I wrote a blog lamenting the death of offerings in the individual life and annuity space. I loved the meeting and learned a lot in the group and other spaces, but there just wasn’t that much in individual. 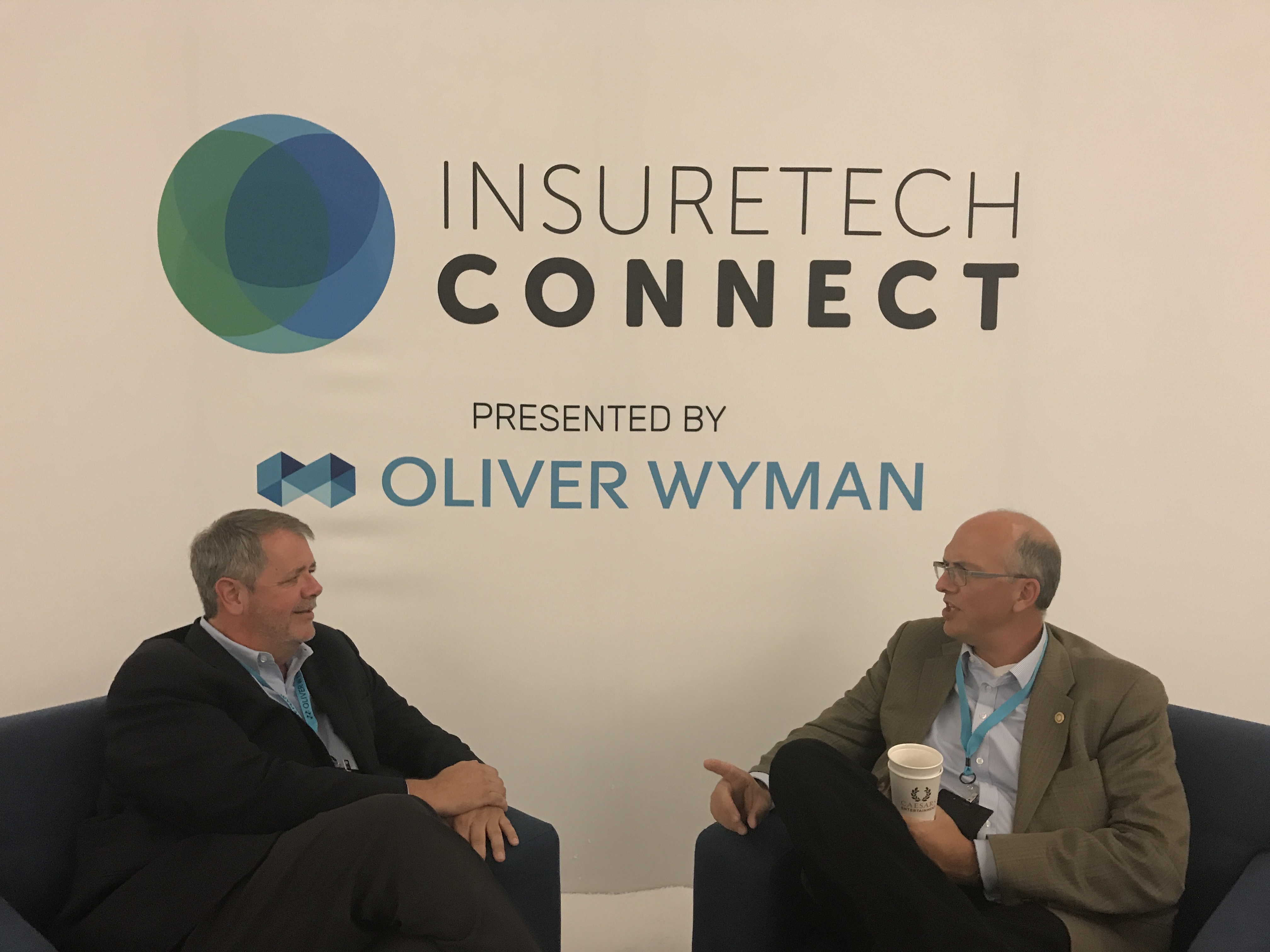 Oh how that has changed. I had the opportunity to “speed date” with a large number of people at the conference. This ranged from startups to insurers. I saw innovation in underwriting, direct-to-consumer sales, customer experience, data analytics, and more. The entire session was a leap forward for the event. The startup vendors had unique takes and were bringing offerings that can legitimately shake up the industry. 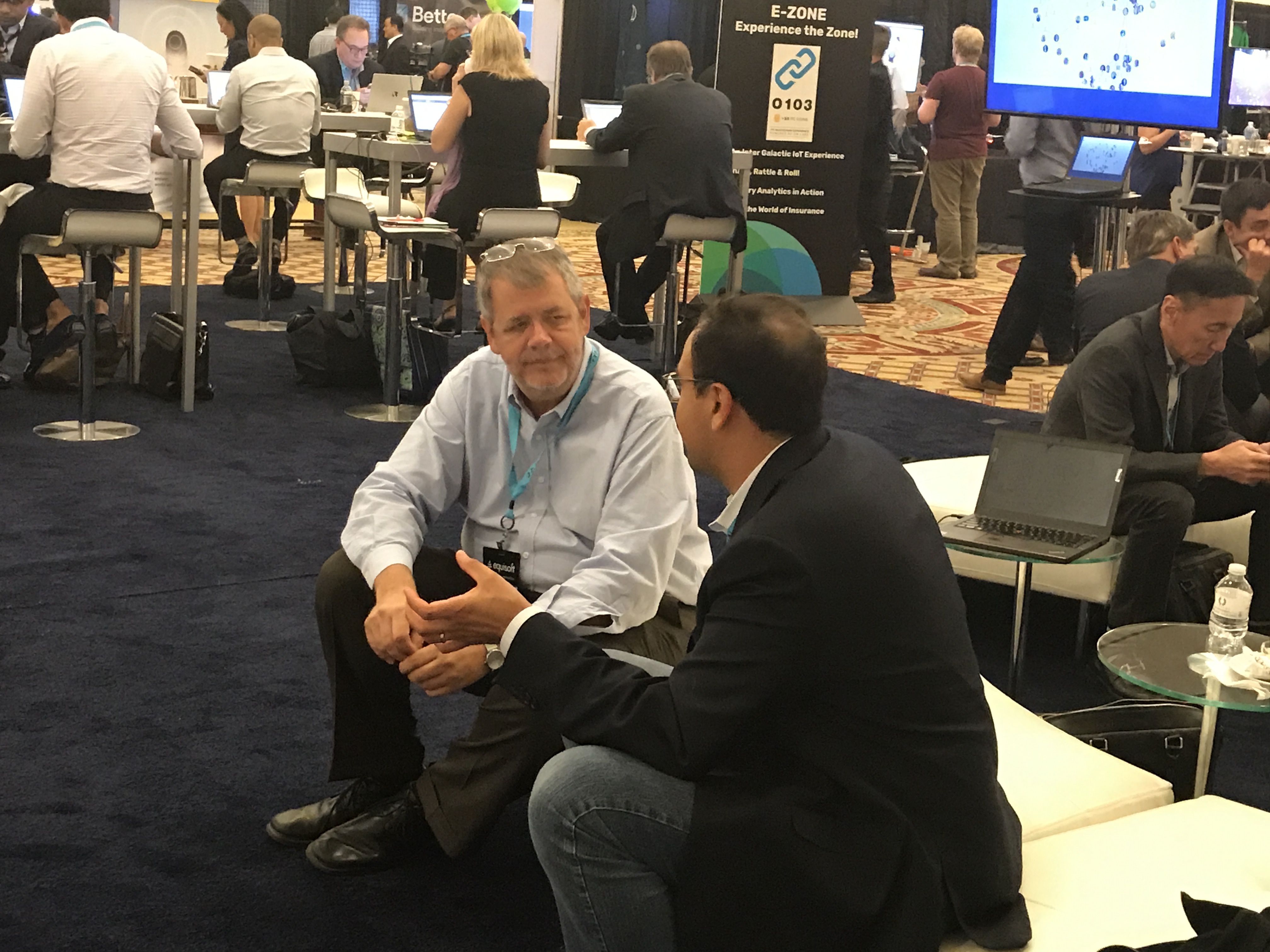 Our conversations with insurers were equally interesting. Their level of interest and engagement was fantastic. These were leaders of their organizations at the meeting to find ways to disrupt their companies. We are confident that there will be many follow-up meetings, both for us and for the other attendees.

We also want to call out how impressive Oliver Wyman’s commitment was to the event. Full disclosure, Oliver Wyman is our parent company. They saw the need for this event and invested in the very early stages, before the first meeting last year. This has turned out to be a great leap for them too, because it is rapidly turning into one of the premier events.

The Hum of Excitement - Colleen Risk

There was a hum of excitement all around us as we met with insurers, startups, and innovators at ITC 2017, and I truly mean all around us. There were 200 tables set up in the conference hall for attendees to network. Meetings were arranged via an app that matched people with like interests. Each table included two to three groups, so more than 500 meetings were going on at the same time. 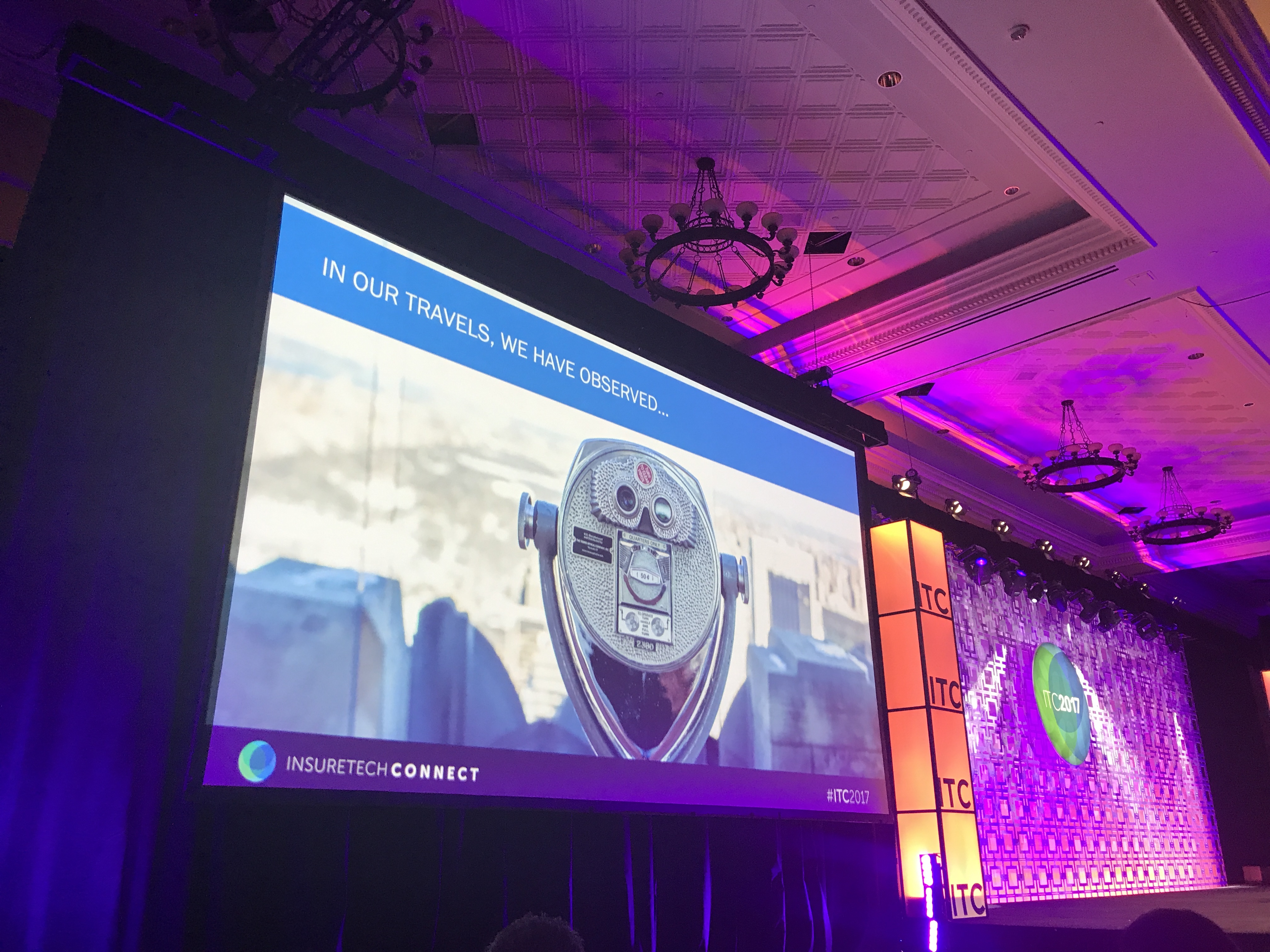 Believe me, that many people talking at once creates an electrifying environment!

Life insurance startups were my focus for the conference. Many startups have taken the first step by creating a product with potential. The next step is to partner with an insurance company or consulting firm that can help to build out the use cases that will demonstrate the product’s full capabilities. The third step is to make integration into the insurer’s ecosystem easy and seamless.

Insurtech Connect has become the place to go if you want to know what’s going on with insurance and technology. It’s amazing that in only two editions this conference has been able to attract over 4,000 people from 48 countries. This year traditional tech companies serving the insurance industry were also present, making this conference a landmark for the industry. 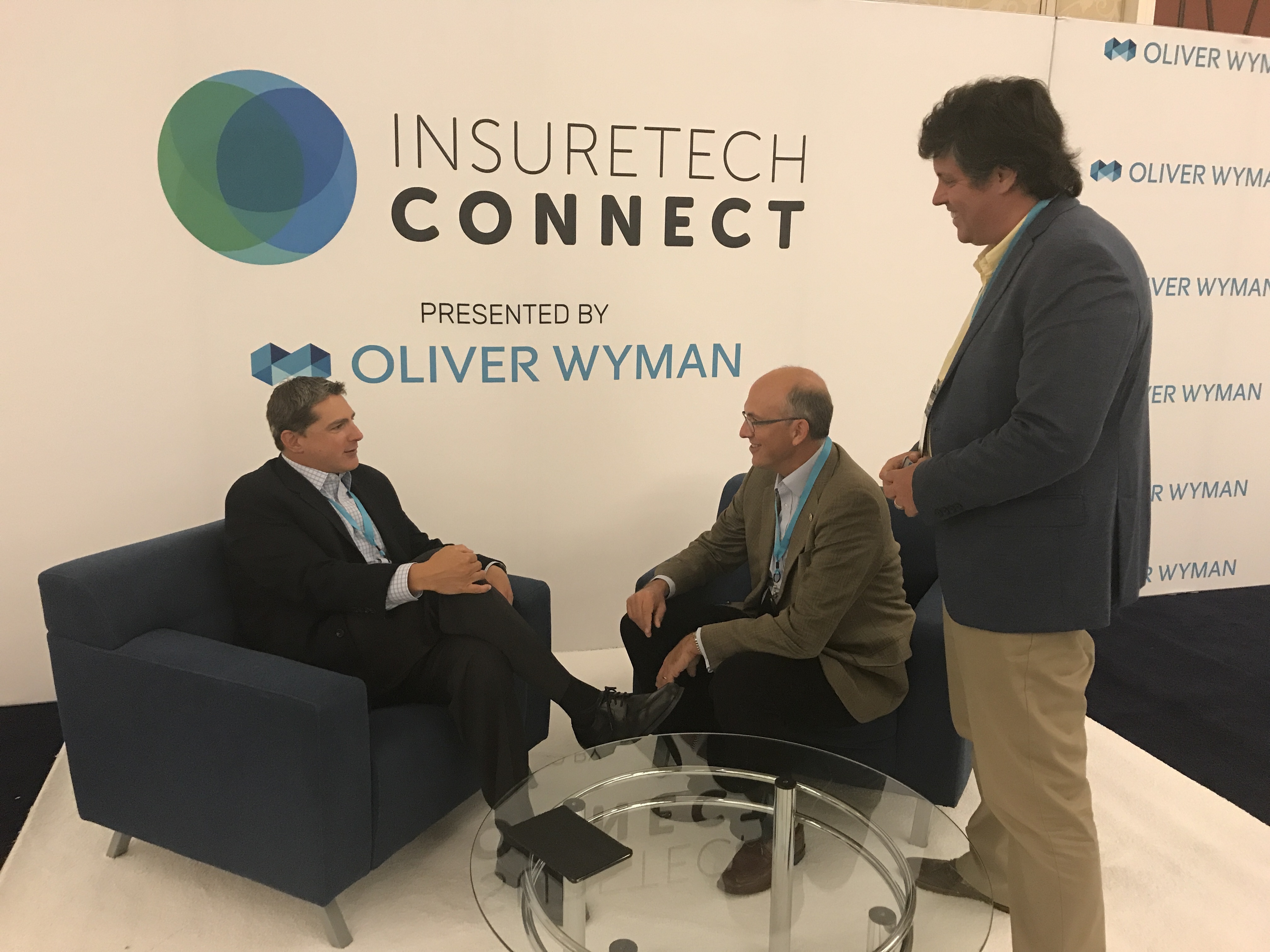 In my meetings with insurtech players and carriers, the aspiration to partner was evident. Carriers looking for new technology and accelerators to their digital and innovation agendas; and insurtech startups (mostly) looking to attract partners; and in the middle, traditional insurance technology players trying to make a statement that their technology is as fancy as the tech provided by startups. 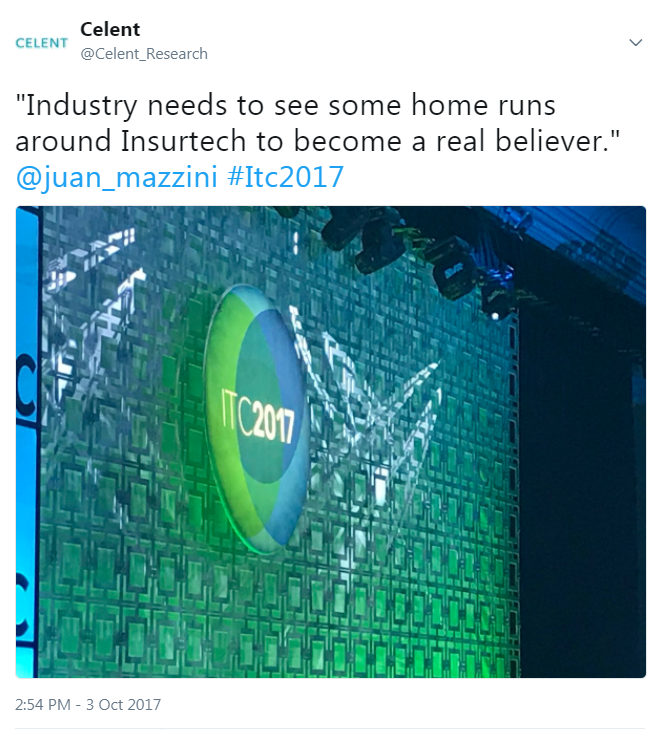 I met with VCs, carriers, and startups from different countries, with business propositions in P&C, life, and health insurance. Startups I met were offering technology ranging from drones, data assessment, digital platforms, distribution platforms, and lifestyle platforms, among others. There weren’t many startups looking to compete with carriers present, but that’s understandable because insurtech may not be the place to be if you think of yourself as a competitor to carriers.

In coming years at Insurtech Connect we may see an increased international presence (only 20% of attendants where from outside North America), if Insurtech is to become the global Insurtech conference. It definitely has the potential, and I expect to see that happen. I also expect to see how the insurtech offerings evolve in the next few years; the industry needs to see successful, profitable, stories to sustain investments in insurtech.