Create a vendor selection project
Click to express your interest in this report
Indication of coverage against your requirements
A subscription is required to activate this feature. Contact us for more info.
Celent have reviewed this profile and believe it to be accurate.
We are waiting for the vendor to publish their solution profile. Contact us or request the RFX.
14 May 2012
Michael Fitzgerald
Karen Monks

Insurance deal activity slowed in the segment, but some vendors are seeing successes.

In a new report, North American Insurance Software Deal Trends 2012, Property/Casualty Edition, Celent analyzes deal data provided by software vendors active in insurance in North America. A close look at 2010 and 2011 deals that fall into each metacategory and subcategory shows that, although 2011 showed signs of an improved economy, insurers continued their slow rate of investment in external software. Overall deals for property/casualty software were down, but a like-on-like comparison to last year’s results shows that some vendors were successful despite the slow market.

The report breaks down deal activity by carrier size, type of deal, four broad metacategories (core processing, distribution, infrastructure and financial, and document/content management), and a number of subcategories. Data from previous Deal Trends reports are used to look at longer-term trends, and leading vendors for each metacategory are identified.

Based on vendor-provided data, the report also names leaders in the Celent Traction Index, which is an indicator of which companies are finding success in the insurance vertical. 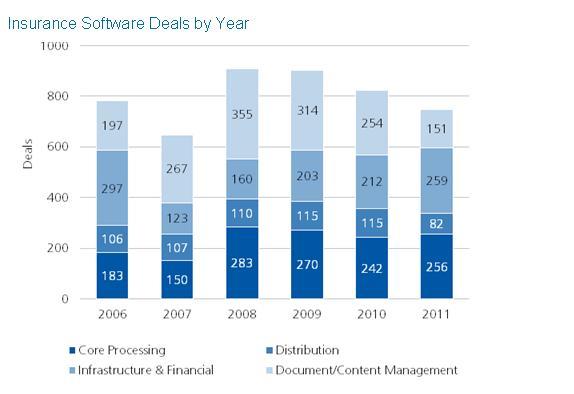 “Continued investment in core systems renewal was clearly reflected in the property and casualty deal data,” says Mike Fitzgerald, senior analyst with Celent’s Insurance group and coauthor of the report. “Insurers are feeling market pressures from consumers to deliver functionality such as web inquiry and electronic document presentment. Hence,updated core systems have moved from a nice-to-have to table stakes.”

“Our 2012 report shows that overall deal activity among P&C insurers slowed last year. Activity in the first quarter was reduced after three exceptionally strong quarters in 2010.,” says Karen Monks, analyst with Celent’s Insurance group and coauthor of the report. “Insurers picked up their software purchases as 2011 progressed, but the total for the year did not equal the numbers seen in the previous two years.”