Create a vendor selection project & run comparison reports
Click to express your interest in this report
Indication of coverage against your requirements
A subscription is required to activate this feature. Contact us for more info.
Celent have reviewed this profile and believe it to be accurate.
20 June 2021
Monica Summerville

Is the capital markets front office the final cloud frontier? I was asked to discuss this question on a recent webinar where I was joined by co-panellists from Aquis, an exchange, and IPC, a financial markets technology and services provider. Of course, before COVID-19 most trading floor technologists at financial institutions (FIs) would likely have said the front office will never move to the cloud. Over a year later with traders working from home, we have realized that trading systems are more portable than imagined. Should banks, brokers, and asset managers be planning for cloud in the front office anytime soon? The panel’s consensus on this issue was a firm “yes”—and the sooner the better

Banks are already embracing cloud, with public announcements by JPMorgan Chase (JPMC), Capital One, Goldman Sachs, HSBC, Deutsche Bank, and Bank of America—to name a few. JPMC for one has said that by 2025 the firm is committed to having the majority of its application workloads running its multicloud platform, which the firm refers to as its “3+1 Cloud Strategy" as it includes the firm’s private cloud, Gaia, and three public cloud offerings (Amazon Web Services, Microsoft Azure, Google Cloud Platform). Similarly, Goldman Sachs CFO Stephen Scheer said on the company’s 2021 first-quarter earnings call, “Our new builds are largely, perhaps not exclusively, cloud based.”

More recently, Morgan Stanley announced a strategic cloud partnership with Microsoft, citing sharing data in the cloud with customers as a key focus. Like JPMC, it will maintain a multi-cloud approach working with AWS, GCP, and IBM. For example, Morgan Stanley rolled out use of cost-efficient Amazon EC2 Spot services to calculate equity risk during early 2021 when trading volumes continued to surge due to pandemic-related market volatility. 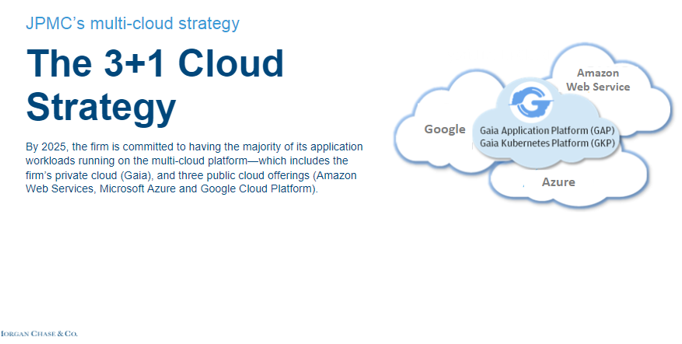 How did things change so quickly?It’s clear that the need to respond to COVID-19 restrictions has been a catalyst for change through the financial industry. Across the enterprise, FI technology managers have been thinking about cloud differently. Rob Rooney, Morgan Stanley’s head of tech, operations, and firm resilience toldBusiness Insider, “Our on-prem environment is frankly world-class, incredibly efficient, and works exceptionally well, but we can’t scale it the way we can in the cloud.”

In a survey of hundreds of financial services market participants conducted by Celent in April 2020, nearly half said that they would likely or definitely increase the use of cloud going forward, as opposed to strategies they had outlined before the pandemic (see figure 1).

Figure 1: Nearly half of financial firms surveyed said their plans to use cloud have changed 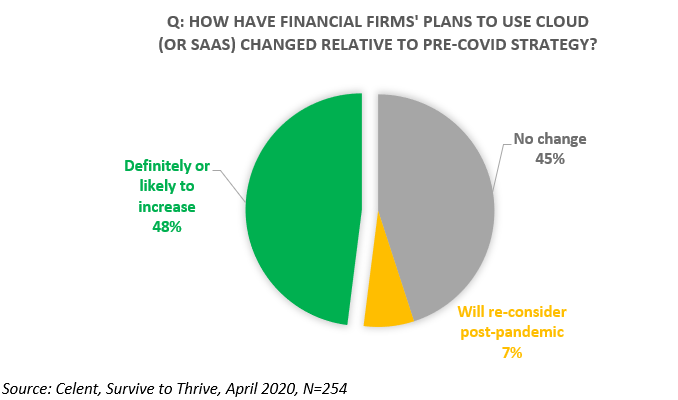 But will this shift include the capital markets front office, which historically has stayed on premises?

The public announcementse are not clear on this point. Last December, Deutsche Bank announced a strategic partnership with Google Cloud Platform, and the early use cases include enhancing the bank’s Autobahn platform, an electronic service offering for institutional clients. Initially, however, this is centred on creating more personalised recommendations and experiences.

Celent has seen more demand for outsourcing of technology and managed services, but does this mean the cloud as well? During the webinar I discussed that traders and technologists in the capital markets front office have unique technology expectations. These can include:

With this somewhat daunting list of requirements, is it any wonder that most trading businesses have been sceptical of moving to the cloud? After all, the public cloud business model mostly revolves around sharing commodity hardware with many end users.

But as my co-panellists discussed on the webinar, progress has been made across a range of these requirements. For example, Adrian Ip from Aquis Technologies, the software development and licensing arm of exchanges service group Aquis Exchange, successfully collaborated with the Singapore Stock Exchange (SGX) and Amazon Web Services (AWS) to develop a Proof of Concept (PoC) to show that running matching and matching in the cloud is a viable option. Mike Smith, Director, Global Exchange Relations Management, IPC, made the point that the pandemic ignited a rise in retail trading and forced institutional traders out of the office. Both events have resulted in financial market players having to think about how they reach investors who are no longer sitting on trading floors or are trading through multiple mobile devices.

I won’t recap the entire session—check out the webinar replay for details.

However, one audience question stood out. It focused on the key issue holding back the front office in terms of cloud adoption. While the list of challenges outlined in the table is being addressed by leading cloud service providers, what remains is the issue of ecosystem. Capital markets is a network play, and sitting in the centre are the marketplaces, the exchanges, and liquidity venues. Once they start moving core systems to cloud, the rest of the industry will surely follow. However, with a focus on security and resiliency, financial markets infrastructures (MIs) have not historically been first to come to mind when the conversation turns to innovation, so many believe MIs are unlikely to move critical systems to the cloud

That view is dated – Celent research has found that exchanges have ambitious plans when it comes to cloud.

Celent recently interviewed CIOs at global exchanges and other MIs across the globe and asked, among other things, about their current and future state of cloud adoption. (The report is available to Celent clients here). The results (see Figure 2) show that today the vast majority of exchanges are early in their cloud journey. However, by 2025, 78% will have nearly or fully adopted cloud.

So watch what the exchanges are doing, and for financial institution people reading this post, it’s time to plan for cloud for the front office. 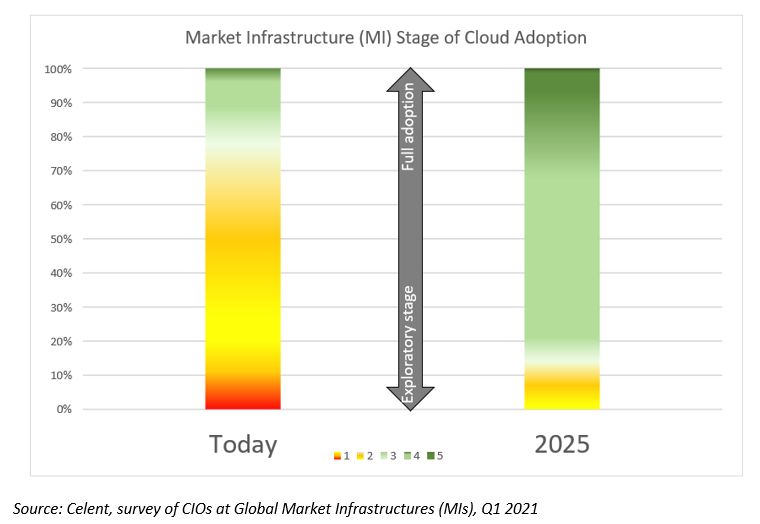