Adapting to the New Normal

Create a vendor selection project & run comparison reports
Click to express your interest in this report
Indication of coverage against your requirements
A subscription is required to activate this feature. Contact us for more info.
Celent have reviewed this profile and believe it to be accurate.
9 April 2020
Eiichiro Yanagawa

COVID-19 Impact on FIs' IT Plans

On March 17, the Heritage Foundation, a U.S. think tank, declared Singapore the "freest economy" in the world. Less than a week later, the city-state completely sealed its borders. The Causeway (the road and rail bridge that links the island to Malaysia) has blocked the passage of 400,000 people who come across to work on a daily basis. Changi Airport, one of the busiest airports in Asia, has banned non-residents from passing through, and Singapore Airlines has announced a 96% flight reduction on its routes.

APAC's economy, which has relied on its openness as a major economic and financial hub (e.g. Singapore and Hong Kong), as a bastion of global supply chains (e.g. Taiwan, Bangladesh, and Vietnam), and as a tourist destination (e.g. Thailand), has been forced to rapidly and comprehensively block and isolate its borders. The sight we are seeing now is that the world economy is almost completely locked down. The demand for social distancing has not only restricted people's movements but has also prompted companies to rethink their supply chains.

In the past few years, ASEAN countries, especially Vietnam, have been attracting manufacturers who have shifted from China to avoid tariffs imposed by Washington as part of its "trade war" with Beijing.

Even before that, manufacturers had taken advantage of low tariffs between ASEAN countries to arbitrage labor costs and government support. Parts assembled in Vietnam and India moved across borders many times, adding value at each stage, becoming finished products (e.g. refrigerators and cars). The COVID-19 pandemic has the potential to disrupt this cross-border value chains.

No Going Back from This New Normal

What does this crisis mean for APAC's economy, which has depended on such openness? And what will APAC’s and the global landscape look like to us after we have finally taken control of this pandemic?

In the last few weeks, where business trips, meetings, and conferences have been completely suspended, APAC's corporate activities have been wandering through previously unexplored areas. Even for an analyst like myself, who has frequently traveled to conferences and roundtables to "meet," "dine," and exchange ideas with thought leaders from around APAC, all those scheduled for the first half of 2020 have been canceled, and my Outlook calendar is now filled with conference calls, webinars, and digital conferences. Celent's I&I Day, our flagship event, was one of the first to shift to Digital I&I Day and has received many registrations. (To register, click here.)

This is not a scene from a science fiction film. It may soon become the "New Normal". The APAC economy, which has relied on openness, will have to face a new normal that cannot be turned back.

International migration, the movement of people across borders, has had a tremendous impact on economic growth and poverty reduction in both the country of origin and the country of destination. According to available World Bank data, more than 247 million people were living outside of their countries of birth in 2013, and over 750 million migrate within their countries. Over the next few decades, demographics, globalization, and climate change were expected to encourage more people to migrate, assuming geographical spread. The APAC economy has indeed enjoyed the greatest impact. We should consider the “social distancing” pressures (or virtual movement?), and be ready to adapt to a different dimension of the environment. 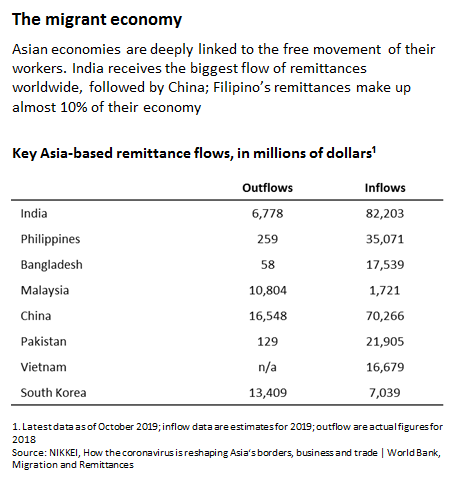