Comparing Channel Priorities: Europe and the US

Create a vendor selection project & run comparison reports
Click to express your interest in this report
Indication of coverage against your requirements
A subscription is required to activate this feature. Contact us for more info.
Celent have reviewed this profile and believe it to be accurate.
3 December 2010
Bob Meara
I recently reviewed an Oliver Wyman report on multichannel banking among large European banks that includes the results of a survey of 30 European retail banks from France, Germany, Italy, Spain and United Kingdom. Taking note of relative channel priorities among survey participants, I was compelled to compare those with stated priorities among US banks surveyed in July as part of a Celent research effort aimed at understanding the current and future state of branch infrastructure leading to a report published in August. The Celent survey gathered responses from 187 financial institutions. Among them were 33 banks in the >US$50b asset tier. The graph below compares stated channel priorities between the Europe and US >$50b responses. The graph shows the percentage of respondents rating each channel as #1, #2 or #3 in spending priority. [caption id="attachment_1942" align="aligncenter" width="610" caption="Source: separate Oliver Wyman and Celent surveys"] 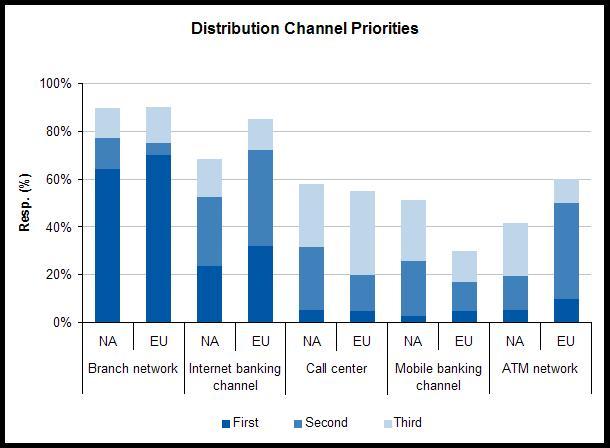 [/caption] I’d like to offer a few observations and invite your comments. In both regions: • Multichannel investment is a high priority • Branch channel remains the highest priority, closely followed by the internet channel. Interestingly, branch channel priorities are nearly identical across the two regions. • Mobile banking is the lowest priority channel However, there are several significant differences. Specifically: • The ATM channel is a much higher priority among large European banks than it is among the US sample. 50% of the EU banks rated the ATM channel #1 or #2 in priority compared to just 19% among large US banks. • The mobile channel is a comparatively low priority among EU banks (17% placing mobile banking among the top-2 priorities versus 26% among large US banks). Now, two questions for our readers. Feel free to post a comment or e-mail me directly at bmeara@celent.com if you wish to weigh in off the record. 1. Why is the ATM channel such a comparatively high priority among EU banks? 2. Conversely, why is the mobile banking channel such a comparatively low priority? I’ll post a summary of responses along with a Celent/Oliver Wyman position next week.