Create a vendor selection project & run comparison reports
Click to express your interest in this report
Indication of coverage against your requirements
A subscription is required to activate this feature. Contact us for more info.
Celent have reviewed this profile and believe it to be accurate.
23 February 2011
Bob Meara
Making occasional check deposits using one’s cell phone camera is a great idea. Mobile RDC is a strong concept for its convenience, cost effectiveness and ubiquity. It’s a win-win for financial institutions and customers alike. Yet two things are causing FIs to move with extreme caution: risk and compliance. A recent Chase announcement suggests that mobile RDC may be easier said than done. Last week, Chase announced a relationship with Mitek Systems to provide mobile RDC capabilities to the bank across a variety of smart phone platforms. But, Chase had previously launched its service behind significant national television advertising buys. It’s a fun ad. The post-launch move to Mitek invites questions. Why? Why now? Chase first made its Quick Deposit service available to customers in July through an update to its app for Apple Inc.'s iPhone mobile banking platform. In November it rolled out the service to customers who use Google Inc. Android smart phones. Neither initiative utilized Mitek’s Image Prove technology. With a significant base of registered users, why change platforms now? Our guess is that the image analytics engine supporting the application wasn’t up to the task. This likely caused usability problems such as those experienced by Celent’s own Bart Narter (see Bart’s blog here). There’s nothing worse than getting all fired up from a good TV ad only to be disappointed with the app later on. OK, there are worse things. Producing consistently high quality images with low exception rates under conditions of widely variable lighting, contrast, camera angle, signal strength and steadiness of hand is not trivial. In Celent’s opinion, the key to achieving good performance with mobile RDC lies with skillful use of imaging technology. Maybe that’s why nearly all vendors of mobile RDC solutions employ Mitek’s stuff (with its resulting impact on product cost). Mitek’s Mobile Deposit addresses the high variability of mobile image capture with a real time sever-side image analytics approach it calls IMage- PROVE. The basic idea is to use image analytics to automatically and satisfactorily mitigate unwanted image variability so as to render the originally captured (e.g., “raw” image) usable for automated processing. In Celent’s view, this process (regardless of solution used) is key to Mobile RDC’s viability. Without it, both user experience and operational results would likely be unsatisfactory. The figure below shows the processing of such “raw” mobile images. 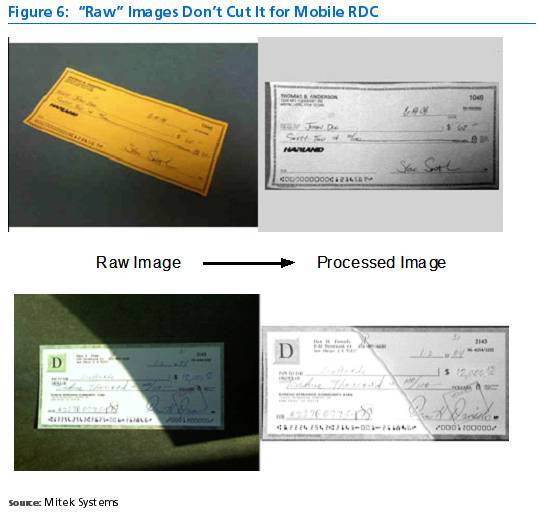 In August 2010, Mitek was granted a patent on its use of IMage PROVE technology in a mobile RDC environment. The patent covers the process of capturing a color image of a financial document using a mobile device and then transmitting the image to a server where the image can be processed further. The patent also covers the steps of detecting the financial document in the image, converting the image and correcting the orientation and size of the image. Some vendors and banks have tried to make due with image analytics systems designed for traditional check scanning approaches. Doing so might save some money, but will likely result in an eroded user experience and dissatisfied users. Compared to the cost of branch deposits, mobile RDC is a bargain. Our advice to banks: don’t be cheap, you might regret it later on. Our view: this move is good for Chase and ultimately good for the industry. A number of other large banks are close to launch. We hope all goes well.