Evacuate or not: Decisions to make in the path of Irma

Website
Create a vendor selection project
Click to express your interest in this report
Indication of coverage against your requirements
A subscription is required to activate this feature. Contact us for more info.
Celent have reviewed this profile and believe it to be accurate.
We are waiting for the vendor to publish their solution profile. Contact us or request the RFX.
15 September 2017
Tom Scales

This is not our traditional blog post. The insurance content is only tangential, but there is a big catastrophe involved, so certainly lots of claims.

You see I live in Florida. You may be aware of a recent visitor of ours, with the seemingly mild name of Irma. I am sure many of you followed the storm, either out of interest or because you have friends and family in an area that was affected. To clear up any concern, my family made it through the storm just fine, but that is not the point of the story.

The point of the story is uncertainty. I have been somewhat stunned by the number of people that have posted on Facebook berating me and others like me for not evacuating. Usually, these are people nowhere near Florida. Often they compare Irma to ice storms or blizzards. Florida has two major roads out. It is not physically possible to evacuate the entire state.

While perhaps well-intentioned (or not), these people do not understand what it is like to make this decision, particularly when you have five children 11 and under to consider.

This storm was unpredictable and much of Florida was unprepared. The storm was projected to hit Eastern Florida on Sunday night. All week long, we were projected to get Tropical Storm winds here on the West coast. We had been in a Tropical Storm before, so we were not worried. Mid-week, the projections showed Irma strengthening, but still East coast or off the Eastern Shore.

So we decided to stay. By the time, we made this decision, this was the availability of gas: 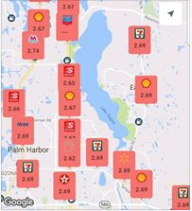 The thought of weathering the storm on the side of the road, out of gas, with seven of us in a top-heavy full-size van made the decision simple. What that red means is there was no gas anywhere near us. With a range of fewer than 300 miles, even with our extra gas cans, we could not have made it out even if we wanted to. Even filling those cans on Monday, a week before landfall, required considerable effort and getting to a gas station at 4am when a truck arrived.

Sunday, the day of the storm, was simply insane. In the morning, the path started to move. West. Towards us. In a few hours, we went from Tropical storm wind projections to Category 4 hurricane. 155 mph winds. Dangerous winds. My wife and I actually had a conversation that revolved around whether we had killed our entire family. We were scared.

Some of our friends immediately decided to evacuate. This is what they encountered: 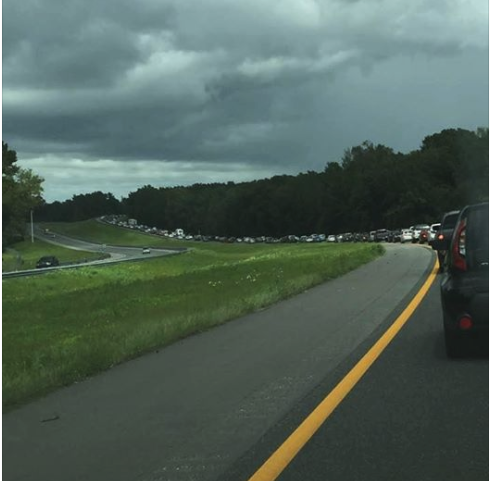 So we made the right decision, sort of.

We had been preparing all week. We had water, we had food. We expected power outages, but do not have a generator. Most people misunderstand the value of a generator. A portable generator, even a big one, cannot reliably power your air conditioner. The problem with the power outage in Florida isn’t lights or refrigerators, it is HEAT. We may get one, we may not, but they are also very dangerous when misused.

So mid-Sunday afternoon, we were afraid. Not outwardly, as we couldn’t scare the kids. Four of them are 7 and under. Two are 5. We needed them calm.

We knew the safest place in our house was the laundry room. I don’t know about your laundry room, but 7 people overnight didn’t seem fun. This was the result: 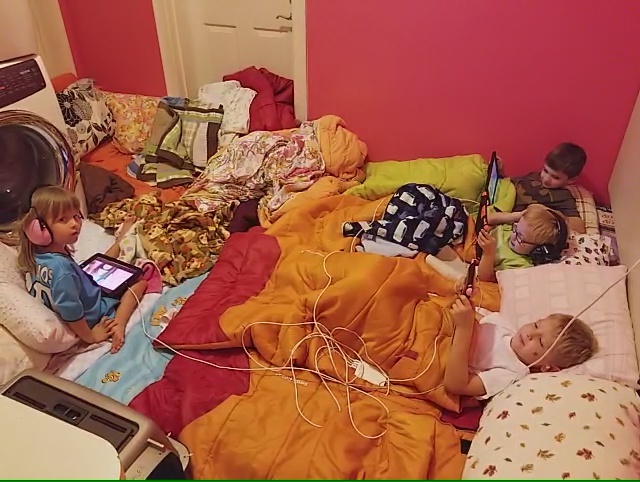 If you count, one child (our 11-year-old) was not in the room yet. He had to fit between the two blond boys on the right. That little spot beside the washing machine was for both me and my wife.

Now, the key to this picture can be seen on our daughter on the left. Pink hearing protectors. We’ll come back to that in a minute.

By the time this photo was taken, our hearts had stopped racing and our comfort level had improved. The island of Cuba had taken a devasting hit. Places we had vacationed just last year were gone. Simply gone.

But Cuba’s sacrifice, and it is big, saved Florida. The island scrubbed off winds. By the time Irma hit us, we only experienced Category 1 winds. Basically around 100mph. It was odd thinking that we felt safe because the winds were only 100mph, but we did. Much of Florida has severe damage. People are still without power. People lost their lives. Our hearts go out to the families. Imagine a Category 5 hit.

To be safe, we still slept in the laundry room, or at least the kids did. The hearing protectors and ear plugs (for the bigger kids) were my wife’s truly magical idea. What is scary about a hurricane is the noise. They are LOUD. My wife and I didn’t sleep much.

The kids did. Slept right through it in their cone of silence.

So where is this story headed? Claims. I mentioned them at the top.

Florida weathered this storm as well as they could. Houston and the surrounding areas did not. We are already watching two new storms forming off Africa. My point is not to make this political, but more practical. The changes in storms are going to have a huge impact on the P&C industry. It already has. I have ONE choice in homeowners insurance. The state pool pushed me (and others) out and our choice is that one carrier. So far they’re pricing competitively, but how long can that last?

Let’s put Irma in perspective. This is a photo superimposing Irma and Andrew. Remember Andrew? 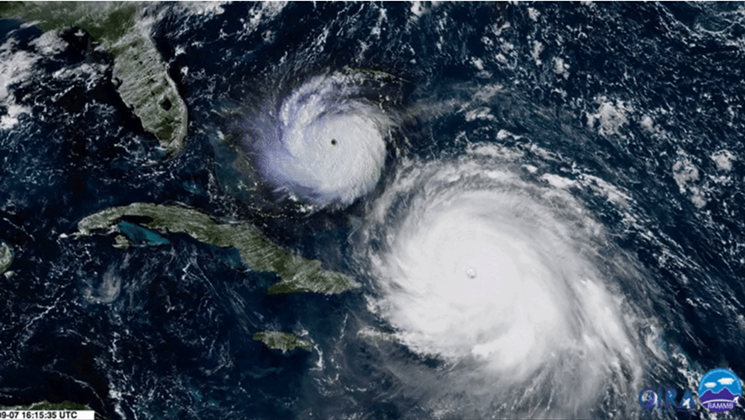 See any difference? Irma was HUGE. Compare Irma to Florida. We were getting something, regardless of the path. Superstorms are going to be the new norm. Let’s hope we do something.

Perhaps the most interesting image is this: 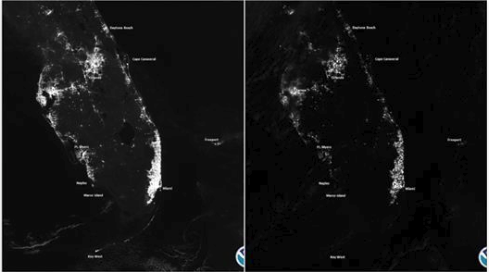 That’s pre-Irma on the left. Post-Irma on the right. Millions of people without power. We are almost a week after the storm and this is Florida Power and Light’s outage map. The gray areas still have major outages. 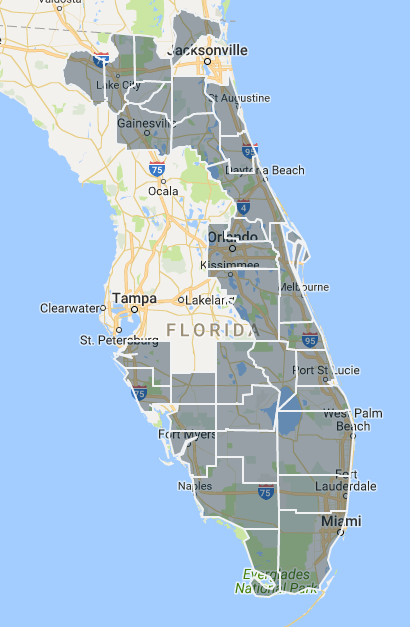 Those nice areas without gray? They’re not FPL. We can fill those in with Duke Energy: 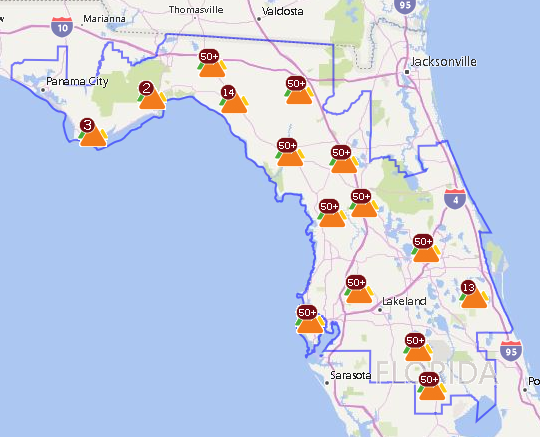 Those symbols that say 50+? That’s because they don’t count any higher. Those are thousands and thousands without power. From a Category 1 storm. Some are being told it will be weeks. This is not meant to criticize the power companies. They are doing an amazing job with a creaky infrastructure.

I don’t have an answer. Heck, I’m stupid enough to live here.

I’ll leave you with a photo of one group of heroes from Hurricane Irma (and other storms): 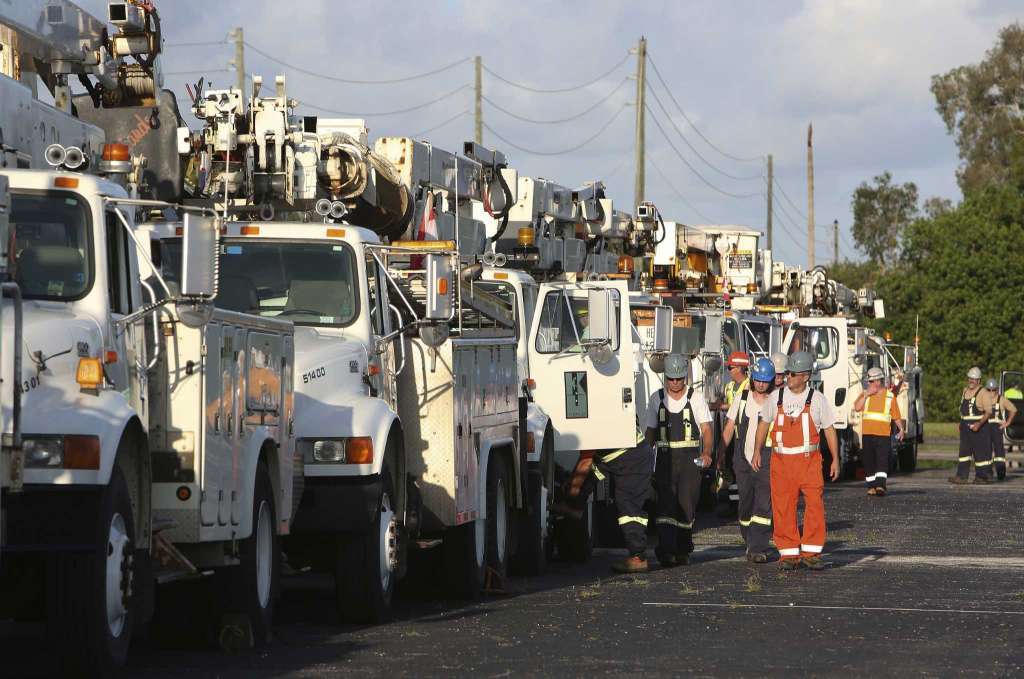 Photo courtesy of the Beaumont Enterprise.