Blueprints for the Next-Gen Zengin, Part 2

Create a vendor selection project & run comparison reports
Click to express your interest in this report
Indication of coverage against your requirements
A subscription is required to activate this feature. Contact us for more info.
Celent have reviewed this profile and believe it to be accurate.
3 August 2016
Eiichiro Yanagawa

The Zengin System is an online data communications system that was launched in 1973. For more than 40 years, both linked entities and transaction volume have increased, and the system has experienced multiple system renewals to accommodate and benefit from advancements in technology. The existing Zengin System, officially known as the 6th Generation Zengin System, began operating in November 2011. In operating the exchange transaction settlement system, the 6th Generation Zengin System plays a crucial role as the central counter party (CCP) and functions as a system platform with an array of key features. The system is a broad-ranging network that covers all of Japan and is defined by consistently advanced levels of security and reliability.

Following the launch of the 6th Generation Zengin System, the BOJ has continued to discuss and search for ways to improve Zengin Net. In December 2014, the JBA and Zengin Net jointly released deliberation results on the Zengin System. The document called for expanded hours of operation, articulated concrete policy, and described the current state of awareness of financial electronic data interchange (EDI) in the financial industry.

Furthermore, in 2015, a working group operating under the Financial Services Agency’s Financial System Council and tasked with improving payment operations compiled the results of two years of discussions in a report entitled “Strategic Initiative for Advancements in Payments and Transaction Banking.” The final version of the document was released in December 2015. The paper contained policy priorities and concrete policy plans regarding the basic direction for the progress in payments, initiatives for the retail sector, the wholesale sector, payment infrastructure reform, and the approach to virtual currency initiatives. In the segment on payment infrastructure, the report put forth five reforms hinging on the Zengin System. It also called for fundamentally enhancing features of the payment infrastructure as well as realizing one common and integrated payment environment that caters seamlessly to both domestic and overseas transactions, and it spelled out a clear deadline for migrating from legacy environments. 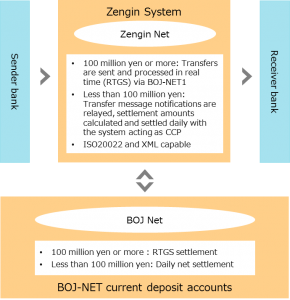