Now is the Time for Open Banking Payments

Create a vendor selection project & run comparison reports
Click to express your interest in this report
Indication of coverage against your requirements
A subscription is required to activate this feature. Contact us for more info.
Celent have reviewed this profile and believe it to be accurate.
2 August 2021
Kieran Hines

Open banking payments (OBP) is one of the hottest topics in the payment industry. Alongside the potential to disrupt existing payment flows, interest is also growing in the use cases for payment initiation APIs to transform a number of inefficient payment experiences. The enabling infrastructure is now in place in several markets and it is time for the industry to leverage OBP.

The concept of open banking payments (OBP) is not a new one, and nor is the idea of initiating payments via API. PSD2 brought new perspective on the topic back in 2018, and this triggered a wave of excitement around the potential for OBP to disrupt several areas of the payment market.

The enabling infrastructure was not ready though, and the topic largely fell off the radar. In the intervening time, the development of clearer standards and the growing maturity of the providers offering enabling services (such as API aggregation) have made OBP a viable proposition for banks, acquirers and the wider payments value chain.

This report examines two themes in detail. The first is the degree to which the enabling infrastructure is becoming increasingly able to support OBP in a number of markets. Alongside improvements in the quality and availability of payment initiation APIs, the wider ecosystem of service providers and vendors is also expanding rapidly: 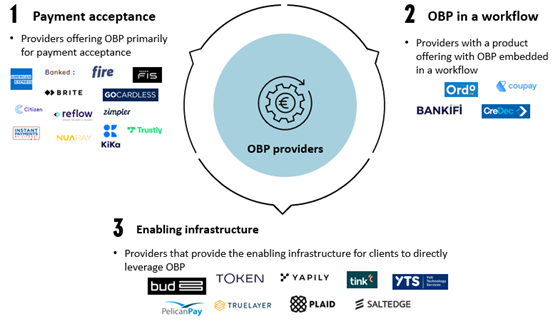 (Note: the companies shown above are not an exhaustive list)

The second theme is the emerging use cases for OBP and particularly how it is being leveraged by financial institutions today. Most importantly, the report concludes with an assessment of where banks should look to innovate in the future.

For banks, which have lost considerable traction in the payment industry to a range of new entrants, OBP represents a significant opportunity to drive innovation and market share. This market is still in its infancy, but banks should grasp the opportunity with both hands.

Readers looking for a thorough introduction to the concept of OBP will find the report Demystifying Open Banking Payments: A Primer useful.