I hate being wrong: A precise look at mRDC adoption in the US

Create a vendor selection project & run comparison reports
Click to express your interest in this report
Indication of coverage against your requirements
A subscription is required to activate this feature. Contact us for more info.
Celent have reviewed this profile and believe it to be accurate.
20 April 2016
Bob Meara

Nobody likes being wrong. I’m no exception.

Sometimes it’s not so much being wrong as much as being inaccurate. Here’s an example of where my best-effort estimates have been a bit off.

Mobile RDC (mRDC) has been a fairly hot topic and a mobile banking capability that has gained rapid and widespread adoption among US banks. But how rapid and how widespread? I’ve taken a stab at answering these and other questions over the past few years. Relying on a combination of financial institution surveys and RFI responses from the leading vendors, Celent has published comprehensive annual reports on the evolving state of remote deposit capture, including mRDC.

Back to the question…

Since empirical methods would be tedious and time consuming, I created estimates of mRDC bank adoption annually based on vendor-reported client base and implementation backlogs. It turns out that two of my last three annual estimates weren’t all that accurate. How do I know?

Last month, FI Navigator and Celent announced a collaboration to publish the industry’s most comprehensive report detailing mobile banking offerings on the more than 6,000 U.S. financial institutions that offer mobile banking and more than 50 vendor providers.

Look at how my historical annual estimates compare to the more accurate FI Navigator data since mid-2013. 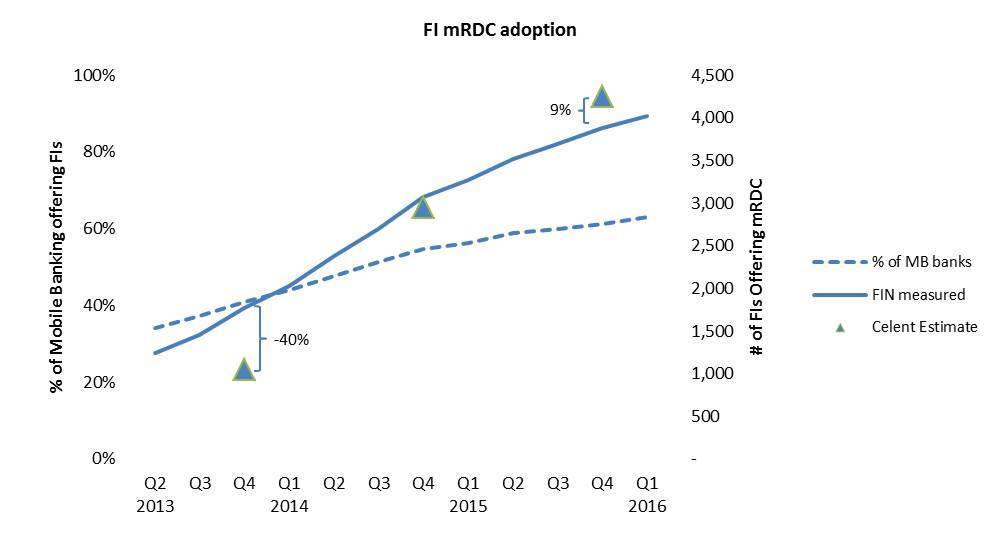 Back in 2013, vendors were implementing as quickly as they could. In aggregate, vendors reported over 700 banks and credit unions were under contract, but not implemented. It turns out that implementations proceeded faster than I thought, as my year-end estimate was 40% low! I did better in 2014, but estimated 9% high in 2015.

I look forward to the extraordinary precision and depth of insight Celent’s relationship with FI Navigator will bring the industry. For more information on the report and additional offerings, please go to http://discover.celent.com/FIN-Mobile.