Create a vendor selection project & run comparison reports
Click to express your interest in this report
Indication of coverage against your requirements
A subscription is required to activate this feature. Contact us for more info.
Celent have reviewed this profile and believe it to be accurate.
31 March 2011
Bob Meara

To be eligible for Deposit Point, one must have had a U.S. Bank checking or savings account for at least 12 months, be enrolled in online banking and have no more than two returned items over the past three months. Eligibility for Deposit Point Mobile similarly required longevity with the bank and enrollment in U.S. Bank Mobil Wallet. Ostensibly, U.S. Bank’s strategy with these products is to improve convenience among existing customers, not to use the channel for new customer acquisition (at least not initially). While this may appear to be a concession, there may be clear wisdom here as well. Here’s why. To mitigate risk, financial institutions typically establish suitability or eligibility criteria for RDC users and place sensible deposit limits on those users. Tighter eligibility requirements allow less restrictive deposit limits. U.S. Bank set deposit limits as follows: • Consumers: $2,500 per day, $5,000 in a five-day period • Small businesses: $5,000 per day, $15,000 in a five-day period These are generous deposit limits compared to the Chase Quick Deposit mobile RDC option, for ecample. If a bank doesn’t have the flexibility to enforce multiple deposit limits based on user segments, we think U.S. Bank’s approach will be much more satisfying to customers wanting to deposit pay checks or other non-trivial items. Celent finds two other aspects of the product launch noteworthy. • U.S. Bank is making both desktop and mobile RDC available to its consumer and small business retail banking clients • It is charging $.50 per deposit for the service This post addresses the former. A subsequent post will address the latter. Last fall, Celent sought to understand if consumer desktop and mobile RDC would co-exist, or if mobile RDC might leapfrog its desktop cousin. If research results are to be believed, U.S. financial institutions intend to launch a goodly number of both product variations. [caption id="attachment_2114" align="aligncenter" width="448" caption="Source: Celent FI survey, September 2010, n=246. Q: In thinking about the industry's adoption of consumer capture, which outcome below do you think is most likely?"] 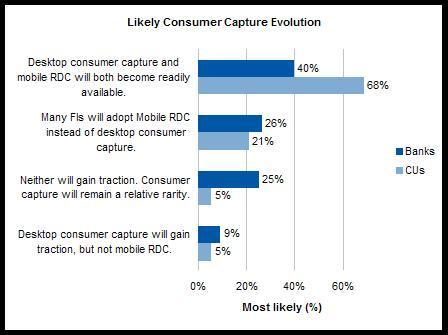 [/caption] Yet, in discussions with financial institutions, many wonder why they would want to launch both desktop and mobile variations. After all, if a customer could just use their smart phone, why would they want to set up a desktop scanner for the same purpose? Do these same banks have both internet and mobile banking platforms? Of course. Mobile banking hasn’t and likely won’t render internet banking channel obsolete. So why would about 25% of financial institutions think mobile RDC will render desktop RDC obsolete in the short-term? Celent’s research supports U.S. Bank’s wisdom in making both product variations available. Mobile banking is hot right now, but the addressable market of internet banking users is much larger and will likely remain so for some time. Although very early, U.S. Bank is seeing higher adoption rates with its desktop solution. See, what did I tell you? We need to remember that financial institutions serve a diverse customer base. Offering customers the ability to interact with their financial institution when and how they prefer is going to be a winning strategy. The same applies for remote deposit capture. Kudos to U.S. Bank for making both options readily available. Next week, we’ll address the fee issue.