Abenomics: The Fourth Arrow of Innovation and Globalization

Create a vendor selection project & run comparison reports
Click to express your interest in this report
Indication of coverage against your requirements
A subscription is required to activate this feature. Contact us for more info.
Celent have reviewed this profile and believe it to be accurate.
12 December 2014
Eiichiro Yanagawa

JAPAN BACK ON TO THE WORLD’S RADAR

The Bank of Japan surprised markets with further monetary easing on October 31, 2014. Befitting Halloween, the BOJ had market watchers on the edge of their seats when the policy committee meeting dragged past noon, finally concluding at 1:44 p.m. Three minutes later, the results sent the Nikkei Average soaring 400 yen. The buying continued with the Nikkei closing up 755 yen at a seven-year high of 16,413. This Halloween treat rippled overseas to major bourses in Asia. Later that evening, the Dow Jones Industrial average followed suit, riding the announcement to a new high. Meanwhile, in the forex market, the yen hit a near seven-year low of more than 112 yen to the dollar. In short, this news focused the attention of market players on Japan’s market and Abenomics.

With the reshuffling of his Cabinet on September 3, Prime Minister Shinzo Abe launched the second stage of his administration. This offered a chance to appraise his core economic policy of Abenomics.

In his September 18 article to the Wall Street Journal[3], Abe gave the below points as integral to the second stage of his plan.

Soon after the launch of the second Abe administration, the first and second so-called Abenomics arrows of monetary and fiscal policy left the quiver. The third arrow of growth strategy structural reforms and the fourth arrow—which has garnered great attention both in Japan and overseas—are taking longer to prove effective. The market has high expectations that more action will follow on the heels of these arrows, action including efforts to accelerate deregulation, innovation, and globalization.

In his first press briefing as prime minister in December 2012, Abe told the media that his administration’s mission was to put the economy back on firm footing. He pledged to pull out all fiscal and monetary stops to revive the economy. Indeed, Abe dubbed his C abinet the “crisis-busting Cabinet” and promised to pour his all into three areas: revitalizing the economy, rebuilding from the Great East Japan Earthquake, and crisis management. To get the economy in gear, Abe stressed his so-called three-arrow economic scheme, designed to revive the economy through bold monetary policy, flexible fiscal policy, and a growth strategy. Two years on, today is an opportune time to take stock of his results.

The first arrow brought a new dimension of monetary easing to an economy struggling to shrug off decades of deflation. Nevertheless, today the likelihood of reaching the 2015 core consumer price rise target of 2% remains highly uncertain. Observers expect ongoing monetary easing based on how inflation data plays out, as well as deregulation and innovation policies.

The second arrow of fiscal stimulus can—through two supplementary budgets—be regarded as contributing to bolstering the economy and easing the consumption tax hike impact. Having said that, stimulus measures have relied on conventional public works projects.

As for the third arrow’s growth strategy, the revised Japan Revitalization Strategy addresses corporate tax cuts and regulatory reform in employment, healthcare, and agriculture; yet, it lacks anything appreciably novel in new fields such as energy or in terms of innovation-promoting policies and global strategy.

In a letter to the Financial Times[4] on June 30, 2014, Abe offer the following points in touting his third arrow and growth strategy.

The market has regarded these policies with a degree of approval. Market expectations were buoyed by the May 2014 new growth strategy—a revised version of the Japan Revitalization Strategy. Japanese stocks jumped, revisiting the 15,000-yen level. This came following a rebound sell-off by foreign investors disillusioned by the growth strategy (Japan Revitalization Strategy) in the second half of 2013. Investors rang in 2014 with more selling, but the new growth strategy triggered a buy-back. The market has maintained a level of expectations for Abenomics, However, 2015 will be a year of milestones for assessing the success (or lack thereof) of Abenomics. These include the second consumption tax hike, from 8% to 10%, slated for October (although it now appears highly likely this will be postponed), the 2% inflation target and fiscal consolidation. 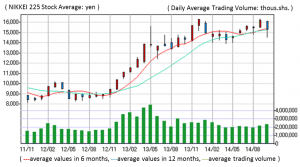 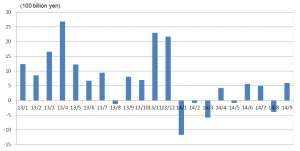 FUTURE EXPECTATIONS FOR ABENOMICS: THE FOURTH ARROW OF INNOVATION AND GLOBALIZATION

Japan’s government announced in June 2013 the revitalization strategy to spur growth. The firing of arrows one and two restored corporate and citizen confidence. To transform expectations into reality, three action plans were formulated: the Industry Revitalization Plan, the Strategic Market Creation Plan, and the Strategy of Global Outreach. The global outreach agenda is designed to boost Japan’s share of the pie in international markets.

In June 2014, the revamped version of the revitalization strategy further spelled out 10 policies to address high-priority challenges. To restore Japan’s “earning power,” Abe called for enhanced corporate governance, a review of public funds management, and promotion of venture business as well as an overhaul of corporate tax reform and promotion of innovation. In addition, as an engine to drive this reform and new growth, he called for employment reform to harness the talents of women and foreigners, and renewed efforts to make healthcare as well agriculture, forestry, and fisheries industries that support regional communities. This growth strategy is noteworthy for its emphasis on private business shouldering the growth. 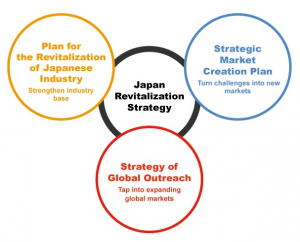 Market attention and expectations are now focused on Abe’s fourth arrow. Initially Abe’s fourth arrow was fiscal reconstruction accompanied by consumption tax hikes. This is changing as elements such as the hosting of the Tokyo Olympics in 2020 are added to the mix. Still, market players are unified in their opinion that both additional stimulus measures and sustainable structural reform are needed.

Celent is convinced that innovation and globalization are economic growth drivers. Today in the financial arena there are two types of globalization afoot: one is expanding business overseas, the other globalizing the domestic market. The former will entail the public and private sector working together in emerging markets with a focus on Asia to support M&A activities and overseas production in line with the development of the local financial business. The latter will hinge on the globalization of financial markets and the development of both corporate and retail global financial services—both fueled by emerging technologies such as digitalization. Celent hopes that Abenomics fourth arrow is aimed at innovation and globalization and that the arrow flies true. 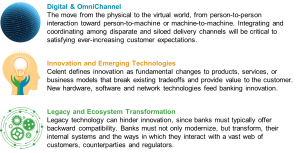