The Best News About RDC in a Long While

Create a vendor selection project & run comparison reports
Click to express your interest in this report
Indication of coverage against your requirements
A subscription is required to activate this feature. Contact us for more info.
Celent have reviewed this profile and believe it to be accurate.
13 January 2014
Bob Meara
I just finished two remote deposit capture (RDC) related reports last week – and yes, they took way too long to complete. The first was a comparison of vendor solutions and the second an analysis of the state of RDC with projections for the future. Having been immersed in RDC for a bit (OK months) I got to thinking. There’s some great news in the world of RDC! For example: • The vast majority of RDC deploying financial institutions still have not suffered any economic losses attributable to RDC. • Even though commercial RDC is a mature market, there remains a significant upside for participating banks in terms of selling additional clients. • Vendor solutions continue to improve at a rapid pace, particularly in terms of providing financial institutions tools to manage risk. • Mobile RDC is experiencing explosive growth behind terrific consumer awareness and strong concept scores. In a July 2013 Celent consumer survey, mRDC was the second most valued capability in mobile banking, exceeded only by account aggregation (seeing all one’s accounts in one place). • Banks are gradually relaxing mRDC eligibility criteria and deposit limits in response to consumer demand and favorable operational experience. And, I could go on. But the most encouraging news in my opinion is that compliance worries are mostly a thing of the past – in both retail and wholesale banking lines of business at most banks. For several years, compliance was “Job #1” for RDC product managers. Thankfully, those days are largely behind us. At last, delivering value and growing the business has returned to the RDC agenda, and it has done so in significant ways. In October 2013, Celent surveyed US banks and credit unions about RDC adoption, risk, attitudes and priorities. We’ve done so annually since 2010. On question asks respondents to rank the importance of RDC priorities. We ask the same question in the context of commercial RDC (treasury management departments) as well as small business RDC (small business or retail lines of business). 2012 was good news. 2013 even better news – after years of a compliance dominated agenda, client adoption solidly returned to the #1 spot. The figure below graphs the percent of respondents ranking each priority as “most important”. Note the year-to-year changes. 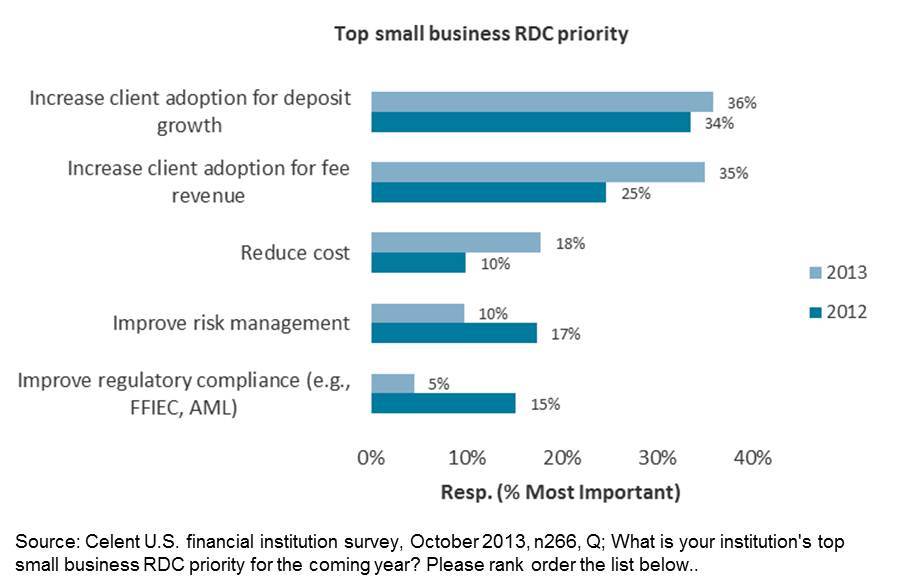 Don’t get me wrong, compliance will remain an imperative in all areas of banking, but it should no longer dominate bank’s RDC project list. More than anything else, this will be a harbinger for good RDC things to come.