Why 'Branch of the Future' must be a Priority

Create a vendor selection project & run comparison reports
Click to express your interest in this report
Indication of coverage against your requirements
A subscription is required to activate this feature. Contact us for more info.
Celent have reviewed this profile and believe it to be accurate.
7 August 2014
Bob Meara
Bank Innovation published a piece written by Brett King this week entitled, Can we Stop Talking about the ‘Branch of the Future’? In the article, King cites the industry’s use of the “branch of the future” terminology as evidence of “one of the key hang-ups that banks have over changing distribution models”. In other words, an inordinate amount of effort expended to “save” an obsolete delivery model. He argues that pursuing a “branch of the future” strategy, banks avoid the real work of improving customer engagement via digital channels. I think that’s nonsense. These assertions may resonate with one heavily invested in Moven, a digital-only bank happily growing by serving a niche market. Most retail bankers know the world isn’t as simple as King asserts. The fact is, banks have more than one challenge ahead of them. Specifically: 1. Right-size the branch network. There are two important aspects to this imperative: first is to redesign the branch channel for its emerging purpose: selling and servicing, and away from its legacy — transactional delivery. The second is to reduce branch network costs (both densities and corresponding operating costs) to enable investment in digital channel development. 2. Learn how to sell and service using digital channels. Migrating low-value transactions to self-service channels is no longer adequate. Digital channels must become more self-sufficient. One important aspect involves learning how to engage customers virtually. In-person must no longer require a branch visit. 3. Catalyze growth in self-service channel usage. For the second mandate to have maximum effect, banks must influence digital channel usage. Branch transformation simply isn’t optional as King suggests. Far from it! Why is Branch Transformation Imperative? Many reasons, but two are central in my opinion: 1. Most banks serve a diverse customer base, with widely varying and continually changing engagement preferences. 2. While customers increasingly transact digitally, they PREFER to engage face-to-face. Celent separately surveyed US and Canadian consumers in the fall of 2013, finding similar results. Contrary to what some would have you believe, young adults do visit branches. Both surveys found a rather weak correlation between age and channel usage – except for the mobile channel, which displays a strong relationship between past-30 day usage and age. 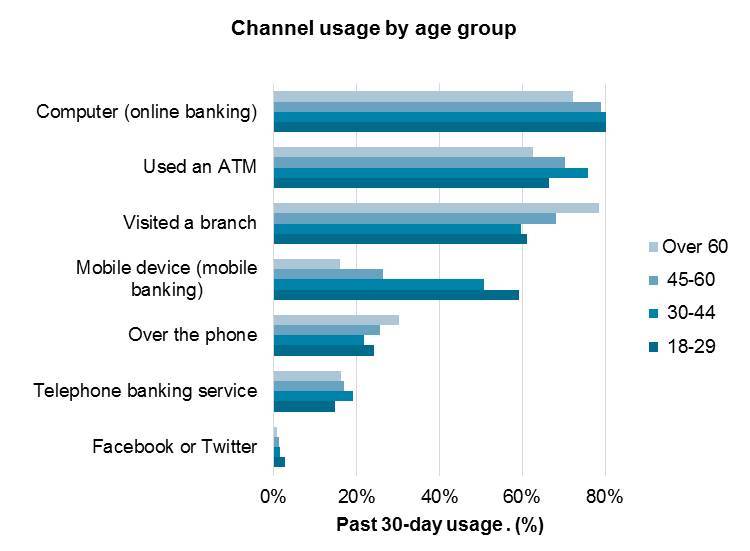 But, past 30-day usage is mostly about transactions, not necessarily engagement. The same two surveys asked respondents, “If you had an important topic you would like to discuss with a banker, how would you prefer to do so?” Responses to that question paint a very different picture – one that explains precisely why most banks derive the majority of their revenue from the branch network. Most consumers – regardless of age – prefer face-to-face interaction on important topics (at least for now). Interestingly, preference for online appointment booking was much stronger in Canada. Not surprizing, since several of the large Canadian banks have been offering (and advertising) the capability for nearly two years, while the same capability in the US is nascent. 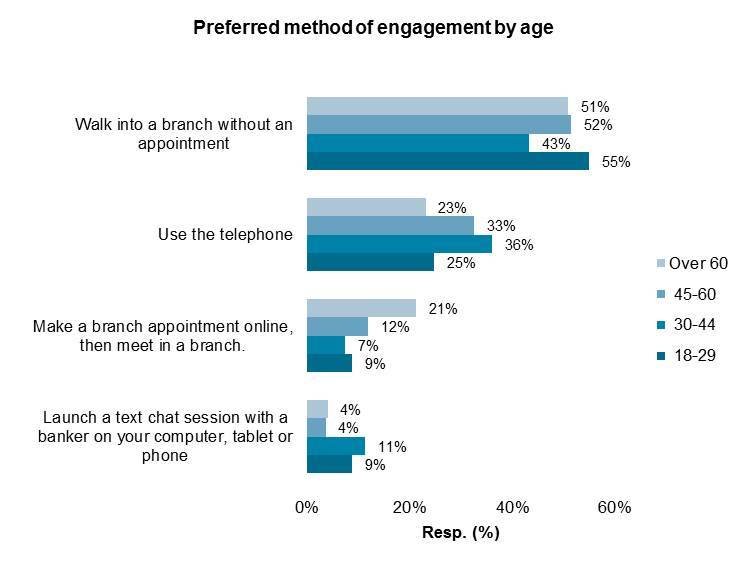 But that’s where the puck is. Where the puck is going is towards more widespread digital channel usage – and engagement - across age and income demographics. That’s why mobile channel development is the #1 retail channel priority in most North American banks. It should be. Those same banks, however, neglect the branch channel at their peril. Banks Aren’t Alone in This The Wall Street Journal published an excellent article this week that provides some much-needed perspective on the branch channel debate (Seriously, why is there still a debate?). Citing data from ShopperTrack, the article asserts a -5% CAGR in store traffic across a broad mix of retailers. Sound familiar? And, banks aren’t the only retailers enjoying the majority of sales from stores. According to the U.S. Census Bureau, online sales now make up about 6% of total retail sales and are growing at more than 15% per quarter. SIX percent! We can argue about the precision of this figure, but the reality is unavoidable – after two decades of digital commerce growth, in-store shopping still dominates. Why no debate about the “store of the future”? Probably because, unlike banks who have largely neglected the branch channel for a few decades, most stores continually invest in optimizing their retail delivery model. Moven can neglect the branch channel because it chose a delivery strategy that alienates the majority of consumers that value in-person engagement. That’s a fine strategy for a niche player. Mass market institutions don’t have that luxury.