Create a vendor selection project & run comparison reports
Click to express your interest in this report
Indication of coverage against your requirements
A subscription is required to activate this feature. Contact us for more info.
Celent have reviewed this profile and believe it to be accurate.
1 February 2013
Bob Meara
All things mobile are so hot right now, and for good reason. Smartphones are quickly overtaking mobile telephony devices at breakneck speed. Remember when people talked on their mobile phones? AT&T activated 8.6 million iPhones and 10.2 million smartphones in the last quarter. Verizon iPhone activations increased by 47% in th3e past quarter. 6.2 million of the 9.8 million smartphone activations in the past quarter were iPhones. Beyond the growth in smartphone usage, it seems new mobile payment options are emerging with mind-numbing regularity. But what about cash? As much as mobile payment proponents would love to see it occur, cash hasn’t shown much migration to digital payment alternatives. Will the erosion of cash usage accelerate? I think so, but cash will be commonplace for the foreseeable future. In fact, that’s why there are so many ATMs. Until recently, 90% of bank-owned ATM transactions were one thing…cash withdrawals. This need for cash spawned the installation of 135 ATMs per 100,000 adults in the US – that’s roughly one ATM for every 750 people (including non-bank owned devices)! As far as we know, this represents the highest ATM density in the world, except for Spain and Canada (see below). 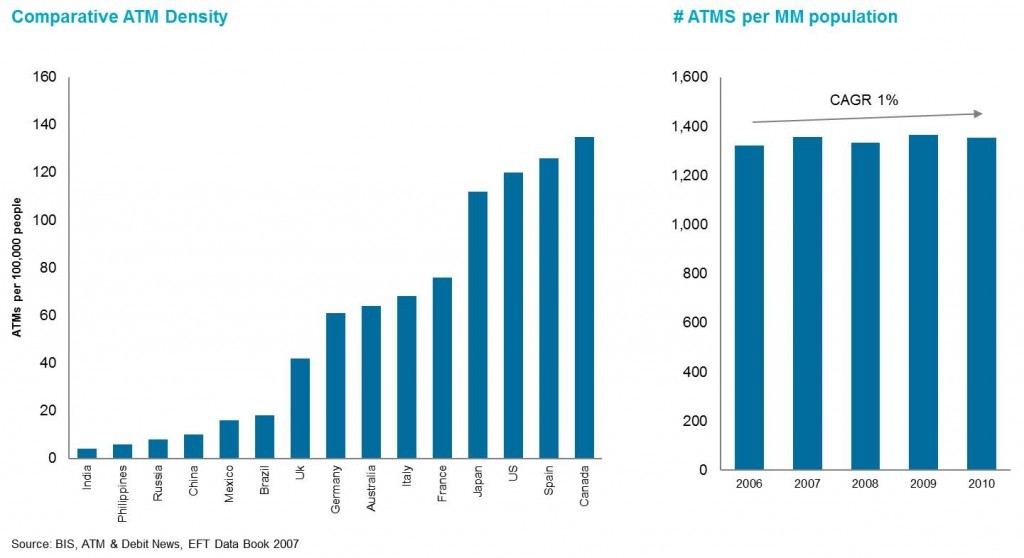 ATM sales have stalled over the past few years to no surprize. We probably have enough of them deployed – in developed countries at least. But what if there were a credible alternative to ATMs for cash dispensing? Apple apparently thinks it has one. It has filed a patent application accordingly. I was made aware of this courtesy of Janney Capital Markets.

Forget Digital Wallet. Apple Wants to Turn YOU Into an ATM Via Ad-Hoc Cash Dispensing Network A recent patent application filed by Apple (AAPL - $456.83; Buy, Janney analyst Bill Choi), describes an iTunes-based ATM network. “Need some quick cash right now and there’s no ATM around? Launch the Cash app, and tell it how much do you need. The app picks up your location, and sends the request for cash to nearby iPhone users. When someone agrees to front you $20, his location is shown to you on the map. You go to that person, pick up the bill and confirm the transaction on your iPhone. $20 plus a small service fee is deducted from your iTunes account and deposited to the guy who gave you the cash.” The patent application makes 24 claims and makes interesting reading. The idea invites a few questions… So if this comes to market, it might never see widespread usage. Even so, the cost to deploy is so small compared to maintaining vast fleets of ATMs, I find the idea compelling. I hope it is available the next time one of my kids asks me to borrow 20 bucks.