Mobile Banking: The “Hockey Stick” is Over

Create a vendor selection project
Click to express your interest in this report
Indication of coverage against your requirements
A subscription is required to activate this feature. Contact us for more info.
Celent have reviewed this profile and believe it to be accurate.
We are waiting for the vendor to publish their solution profile. Contact us or request the RFX.
15 February 2018
Bob Meara

I recently reviewed more than a dozen published consumer surveys relating to financial services usage and attitudes in North America in preparation for some upcoming Celent research. The overriding conclusion from these fifteen studies is this: the mobile banking hockey stick is over.

Any summary of rigorous research risks oversimplifying the topic. This is no exception. But as I encounter banks thinking through meaty topics such as the evolution of retail distribution, a very common question is this; “Where do we expect digital utilization to trend over the next few years?” The answer to this question has enormous implications.

If you’re a large bank heavily invested in digital, your answer will be very different than smaller banks with nominal digital capabilities and half-hearted activation efforts (most US financial institutions fall into this category). The short answer, however, is that mobile banking utilization will continue to grow modestly for the next several years. The days of large, double-digit year-over-year growth is over.

Of course, mobile banking utilization requires that one have a smartphone. According to multiple sources, smartphone ownership in the US is slowly approaching 80% of adults, with no obvious indications that this “glass ceiling” will be busted. Growth rates have been approaching zero for the past three years. For perspective, this is nearly identical to internet penetration in the US which took several decades to reach this point. Mobile has steadily gained on desktop internet access and they both look to plateau at around 80 % of the adult population. 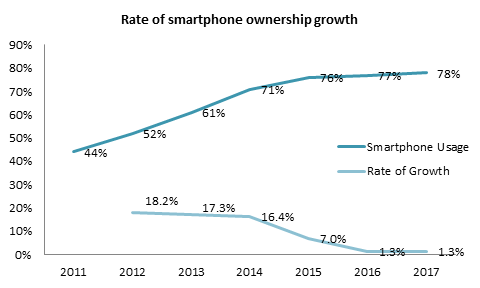 Mobile banking utilization among phone owners has been steadily growing. In large measure, this has historically been a function of mobile banking adoption. Large banks were early-adopters, with community financial institutions following years later. This has resulted in a marked stratification of consumer utilization. Large banks who have offered mobile banking for years invested heavily in its efficacy and promote thoroughly have over half their RBB account holders as active mobile users. For many smaller institutions, less than a third of customers engage with the bank using that channel. The smallest FIs may have 15% to 20% utilization. Based on multiple surveys, those not using mobile banking either have no use for it or are concerned about security - another indication of the approaching "glass ceiling".

The resulting mobile banking utilization among US adults has been approaching two-thirds of smartphone owners (no longer a growing group). 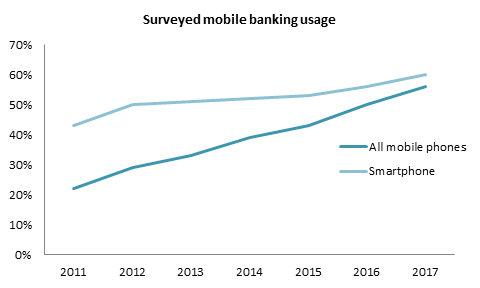 So how high is up? Higher than today, but not dramatically so. This is clear by observing year-over-year growth rates, which are in rapid decline based on multiple surveys. The figure below shows the result of multiple surveys administered by the Federal Reserve between 2012 and 2015. 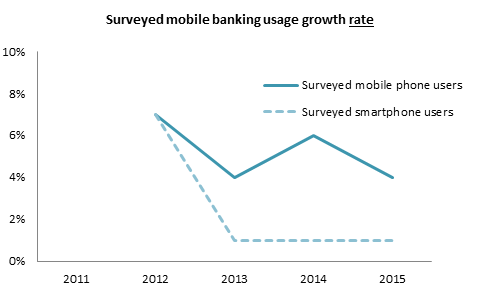