Mobile in the time of digital

Create a vendor selection project
Click to express your interest in this report
Indication of coverage against your requirements
A subscription is required to activate this feature. Contact us for more info.
Celent have reviewed this profile and believe it to be accurate.
We are waiting for the vendor to publish their solution profile. Contact us or request the RFX.
4 February 2016
Stephen Greer
Bank of America recently announced that it would triple spending on its mobile app. While no exact dollar amount was given, it made me wonder: what exactly does that entail? In the past, Celent has praised the Bank of America mobile banking apps as some of the best out there. The bank has been going strong with its digital strategy for years, even closing branches and reducing overhead to drive adoption. Bank of America recently added features like touch ID, debit card toggling, two-way fraud alerts, and more to its app, and has been outspoken about the desire to personalize the digital experience. Its commitment to new features and functionality is reflected in the comments and ratings on iTunes and Google Play. Shown in the graph below, the bank´s mobile banking adoption has been steadily growing, with a growing share of deposits. 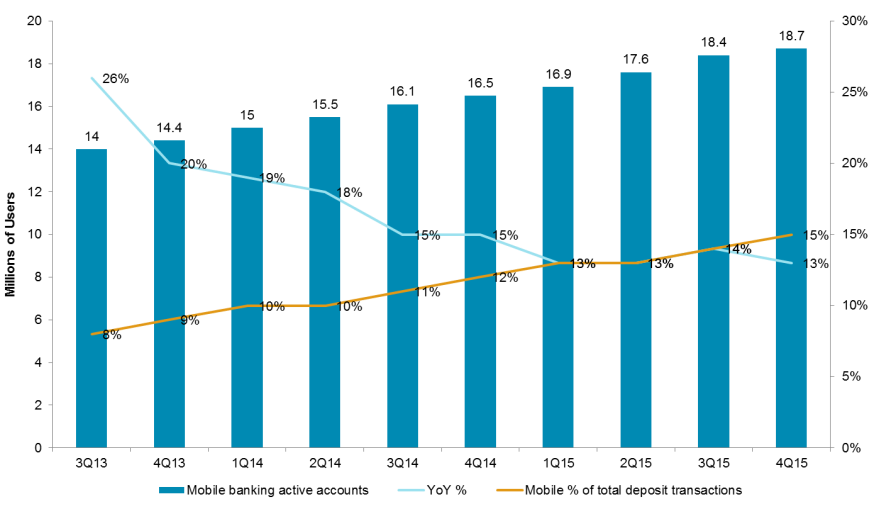 Source: BofA Annual Reports/ Investor Presentations So again: what does “tripling” mean when talking about an app that has obviously been well-funded for quite some time? As digital assumes a larger role with the business, the funding required to build a digital customer experience will extend beyond the reaches of mobile. The capabilities many consumers demand can be difficult if not impossible without significant effort on the backend to align technology. Banks are starting to realize this, building out unified digital platforms that streamline the architecture and better position institutions to offer truly modern, data-driven, and value-added consumer experiences. These kinds of initiatives can often run in tandem with larger cultural and multi-channel efforts. In the press release for the announcement, Bank of America said it was launching a digital ambassador initiative which, similar to the Barclays Digital Eagles program, will see front-line branch staff reskilled to be able to assist with digital channels. The bank is also launching cardless ATMs later this year. I´m assuming the coincidence of these announcements is anything but, and that the funds for “mobile” will largely be dispersed over (or fit into) a wider array of strategic digital initiatives. Institutions need to create a solid digital base within the institution, bringing in culture, personnel, and technology across all channels and lines of business to start transforming digitally. Banks are being challenged by the notion of “becoming digital.” Many have reached the point of recognizing the inevitable digitization of the business model, and are in the throes of decision making that will determine how equipped they are to appeal to the new digital consumer. Most institutions are experiencing these growing pains, and very few have committed to digital at the level demanded by customers. If Bank of America is indeed tripling its budget just for mobile, then I´ll be very interested to see the kind of features the bank develops over the next few years. Yet there´s a lot that goes on to make the front end look good and spending more on the front will mean more spending on the back. Mobile banking is a significant part of digital banking, but remember that it's only ONE part. While new functionality gets the headlines, it’s what's under the hood - culture and backend - that truly matters.