Create a vendor selection project
Click to express your interest in this report
Indication of coverage against your requirements
A subscription is required to activate this feature. Contact us for more info.
Celent have reviewed this profile and believe it to be accurate.
We are waiting for the vendor to publish their solution profile. Contact us or request the RFX.
31 May 2016
James O'Neill

Spring is usually the season for conference travel, and this season has been no exception. While my colleagues were spread out across the US covering conferences in Boston, New Orleans, and other locations, I spent four days in beautiful Barcelona covering the Temenos TCF 2016 Conference, followed by another three days in sunny Orlando covering the FIS Connect 2016 Conference. The fine warm weather was not the only thing that these two conferences had in common, as Temenos and FIS each took the opportunity to showcase their recent investments in new enabling technologies.

In Barcelona, CEO David Arnott kicked off TCF 2016 -- themed Solutions For a Connected World -- by examining the Company's strategic expansion from what has traditionally been a narrow focus on banking software. Temenos's transition to its broader focus on financial services was signaled by its acquisition in March, 2015 of Multifonds, a provider of software and services to the third-party fund administration business that supplies many of the large players in the fund administration market, including large global FIs like JP Morgan, Citigroup, BNP Paribas and Credit Suisse. 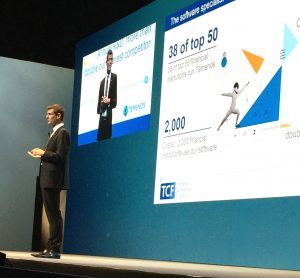 Temenos's strategic expansion makes sense in that its flagship core banking platform T24 has traditionally been aimed at the universal banking market, so fund administration represents somewhat of a contiguous market for them. Speaking of T24, I was a bit surprised at how far T24's re-architecture has come, with John Schlesinger (Chief Enterprise Architect) sharing that an architectural overhaul of T24 will be complete by Release 17 (the solution is currently on R15).

By the time R17 is complete next year, T24 will have been refactored to create a series of frameworks that will facilitate customization of the platform by client banks, allow easier integration with third-party services, and make the transactional data held by T24 more accessible for data analytics. While most of the work here was under the hood and did not impact T24's existing features and functionality, the overhaul was much needed to expand the solution's reach into larger banks, where architectural flexibility is very important.

The T24 overhaul appears to have already borne fruit, with the Swedish retail bank Nordea Bank signing up last September to implement T24 across its regional base of 10.8 million retail and 500,000 corporate customers in several Nordic countries. Clearly one of the benefits of the architectural upgrade is to improve T24's run-time performance, and John shared that T24 has been benchmarked to support 40 million accounts within an end-of-month processing window of only 2 hours and 56 minutes -- an impressive result given that T24 operates on IBM's pSeries server running Windows or Linux, not on the mainframe systems that continues to dominate within large banks.

In Orlando, the theme of FIS Connect 2016 was Empowering the [Financial] World, and it was clear that FIS hopes to leverage some of the new products and technologies from SunGard last November in enhancing the traditional banking and payments offerings aimed into the larger banks that were in attendance. (FIS's community banks had their own conference called InfoShare back in April.) 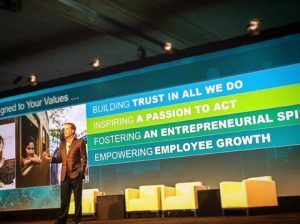 While traditional cash management products like CashExpress (data exchange in support of cash concentration activities) had their familiar place on the Connect 2016 exhibit hall, new services like Ambit Treasury Management for bank treasury departments and FIS's new SWIFT Service bureau offering rounded out the already comprehensive set of solutions FIS has assembled for the corporate banking needs of its clients.

Fiserv drove consolidation in the bank technology outsourcing market in the 1980s and 1990s before handing the baton to FIS in the new millennium, starting with the acquisition of Alltel Information Services in 2003 and continuing with the addition of Metavante Corporation in 2009 and SunGard in 2015. With each acquisition, FIS has generated financial and operational synergies aimed at creating shareholder value, so it was interesting to see how FIS's now multi-year enterprise technology initiative is now beginning to createtechnological synergiesfor the benefit of its bank clients.

The exhibit hall showcased some of the first fruits of FIS's program to create new technologies that can support its bank clients across the range of core banking platforms, from the community banking oriented platforms like Horizon and BancPac to larger bank systems like IBS and Systematics. FIS's Enterprise Customer Experience suite and the new version of its TouchPoint sales and service platform (supporting the branch and call center) were both built to be core platform agnostic and both represent a functional upgrade from the "native" CIF/CIM and sales/service modules associated with FIS's individual core platforms.

By creating new functional upgrades on an enterprise basis rather than through individual core platform enhancements, FIS is hoping to get more bang for its R&D buck, push out new product enhancements to its bank clients more quickly, and redeploy precious IT funding into long-term banking service innovation. Even ten years ago, FIS's strategy would have been inhibited by the relatively inflexible programming tools available to bank IT developers. Today, with the advent of micro-services and standardized banking APIs, FIS has learned that product and services differentiation can finally be made compatible with a single code base.

That looks to be a win-win for FIS and its clients, but as with all things in life execution is key as the enterprise technology initiative grows in scope to cover other important parts of the banking IT system. Stay tuned!