Create a vendor selection project
Click to express your interest in this report
Indication of coverage against your requirements
A subscription is required to activate this feature. Contact us for more info.
Celent have reviewed this profile and believe it to be accurate.
We are waiting for the vendor to publish their solution profile. Contact us or request the RFX.
28 March 2013
Bob Meara
For years, I’ve been able to schedule an appointment with my healthcare provider, barber, pastor and friends, but never my banker. What’s up with that? That's because banks have historically relied on a 100% walk-in model for in-branch sales and service. Things are finally beginning to change. They need to. With branch traffic declining at most banks by more than 5% CAGR, sales leads aren’t just walking through the doors like they used to. And that traffic won’t return unless banks take proactive steps to generate those leads. Banking by appointment is one great way to do so. Why this is such a good idea: • Customer convenience. Rather than rolling the dice with an unannounced branch visit, consumers make their appointment knowing staff with the requisite knowledge and experience will be ready and waiting (at least in theory). • Improved channel capacity. Demand for sales and service staff is hard to predict accurately. This creates several problems. As more customer interactions are scheduled, channel capacity improves along with customer satisfaction. • More effective customer engagement. Done well, front-line staff knows who is coming and what their needs and interests are prior to their arrival. This provides staff the ability to be well-prepared for the appointment, rather than reacting to walk-in visits. Bank of America and Bank of Montreal are two excellent examples of well-executed banking by appointment initiative in my opinion. Bank of America’s capability extends to online, mobile and Facebook customer touchpoints and invites both in-person and telephone appointments. Bank of Montreal (BMO) was a 2013 Celent Model Bank winner for its initiative. BMO Online Appointment Booking (OAB) Initiative BMO launched its new Online Appointment Booking (OAB) functionality in May 2012 allowing personal and small business banking customers and prospects to book appointments in real time, quickly and conveniently directly into branch employees' calendars through Online Banking and BMO.com. The capability is being extended to mobile devices in 2013. Through the first six months since launch, OAB booked nearly 19,000 appointments, resulting in 8,355 product sales. Roughly half appointments were booked through BMO’s public website. On average, 1.8 products were sold per appointment. Based on these results, the project payout is less than 7 months (net of estimated cannibalization – sales that would have otherwise been made). The sales mix (below) reflects significant complex products, suggesting that OAB has been effective in bringing in foot traffic among prospects not likely to purchase online. 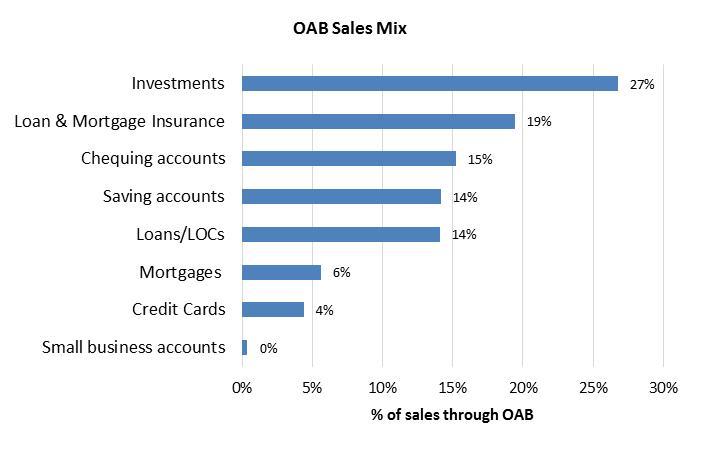 Staff response to OAB has been favorable. Apart from exercising discipline in maintaining Outlook calendars, no additional staff effort is required as a result of OAB – other than keeping appointments booked on their behalf. Celent regards OAB as a model example of making a significant business impact with a relatively simple and low-cost technology investment. So much so, we awarded BMO a Celent Impact Award last month. Celent Impact Awards As Celent reviewed the unprecedented number of Model Bank nominations this year, we were struck in several instances by initiatives that were impactful but were not particularly innovative or difficult. Rather, we were left with the sentiment, “Why aren’t more banks doing this?” In recognition of the wisdom demonstrated by these initiatives, Celent chose to honor three financial institutions with a unique distinction among Model Bank Components. Hence, the Celent Impact Awards. The report, Celent Model Bank 2013: Case Studies of Effective Use of Technology in Banking is packed with 20 detailed case studies. Celent is accepting nominations for Model Bank 2014 through November 29, 2013.