Trying to increase stickiness isn’t worth it

Create a vendor selection project & run comparison reports
Click to express your interest in this report
Indication of coverage against your requirements
A subscription is required to activate this feature. Contact us for more info.
Celent have reviewed this profile and believe it to be accurate.
1 February 2016
Daniel W. Latimore
Customer acquisition is top of mind for many incumbent banks. They want to win new customers and prevent the loss of profitable current relationships. Received wisdom is that increasing “stickiness” will help customer retention. Based on a wonderful natural experiment in the UK, I contend that the resources currently being used to increase stickiness could better be used elsewhere. Even when switching is made as easy as possible, people just don’t do it! Let’s look at what’s happening in Britain, a country with many cultural similarities to the US. Banks spend a lot of time trying to get customers to switch Banks grow their retail account base by acquiring customers with one of three traits: In the third case, customers switch because they move homes, because they’re dissatisfied with their incumbent, or because there’s a significant enough action (merger, branch closure) that causes so much inconvenience that they’re motivated to do something. Banks, anxious to defend their customer base against attackers trying to poach their profitable clients in this third scenario, spend a lot of time thinking about ways to make their account sticky (e.g., through bill pay). The UK has made it as easy as possible The United Kingdom has eliminated most barriers to bank account switching. In effect, stickiness is gone. Regulators have mandated that a bank switch over a consumer’s standing orders and the like to the newly chosen bank, without fees, within seven days. UK regulators are trying to increase competition and awareness to ensure that consumers receive the best banking deal possible. As Payments UK says on its website:

The service aims to increase competition in the high street, support the entry of new banks in the current account marketplace and give customers a greater choice when switching from one bank or building society to another. It is backed by a Current Account Switch Guarantee, and UK banks and building societies covering almost the entire competitive current account market offer the service. All aspects of the Current Account Switch Service (CASS) are now managed and owned by Bacs, the company responsible for Direct Debit and Bacs Direct Credit in the UK.

Enabling this one-week switching process was enormously costly for the banks, who, it’s fair to say, did it only under duress. But people still aren’t switching And yet, the switching rates are well below what was projected, even after most barriers have been completely eliminated! And it’s not because consumers don’t know about it: 72% of respondent have heard of the Current Account Switch Service, and 75% said it would be easy to switch banks. And it’s not because it’s not quick: more than 99% of switches are completed within the seven working day timescale, and 72% of responding consumers said it would be quick to switch banks. All of this is according to BACS itself, as of January 2016. There’s a great deal of back and forth between regulators and banks about what the true switching rate is; the crux is definitional, distinguishing between “active” and “funded” accounts on the one hand, and “manual” vs. “automated” switching on the other. What’s clear, though, is that switching hasn’t increased significantly despite having been made much simpler and easier, and that overall rates remain low, between 1.8% to 3.0% per annum (depending on definitions). Perhaps more significantly, switching rates haven’t increased over time. And the churn rate (“the ratio of account openings to the stock of existing accounts”) remains at roughly 7% [p.15, Personal current accounts, Market study update, Competition & Markets Authority, 18 July 2014]. The graph below based on BACS data shows that the number of account switchers in the UK remains flat to slightly declining. 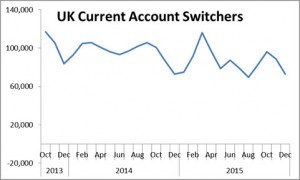 Even “Challenger Banks,” new banks that UK regulators are actively encouraging to increase competition, have seen little very little uptake to date. That may, of course, change over time, but it’s likely to be a decade-long process since consumer behavior changes so slowly. Potential explanations The CMA report reference above prosaically speculates that “competition being more limited than it would otherwise be” could be due to “…customers’ belief that there is limited differentiation between providers, and the complexity in [Personal Current Accounts] charging structures results in low switching.” [p. 17] I think that’s a good bet, and I’d go even farther: customers know the foibles of their current bank, and while they may be unhappy with it, they at least know what to do and what to avoid. They don’t know the ins and outs of the alternative banks, and don’t think that they’ll be much better. In the absence of a markedly better alternative, inertia sets in and they remain where they are. Lessons for banks There’s been a longstanding hypothesis that customers stay with their banks because it’s too inconvenient to switch. A related hypothesis is that if it were only easier to switch banks, more customers would do it. After more than two years of data from the UK, I contend that both hypotheses are wrong. And they’re likely to remain wrong for at least the next three years: customer behavior just changes too slowly. So what does this mean for incumbent banks? I’d offer three key takeaways: