A Future for In-branch Self-service?

Create a vendor selection project
Click to express your interest in this report
Indication of coverage against your requirements
A subscription is required to activate this feature. Contact us for more info.
Celent have reviewed this profile and believe it to be accurate.
We are waiting for the vendor to publish their solution profile. Contact us or request the RFX.
9 November 2012
Bob Meara
The idea of offering self-service solutions inside the branch remains a strangely controversial topic among North American bankers. This need not be. Self-service is rapidly growing across multiple retail market segments and has been a staple of Western Europe bank branches for a decade. Resistance among North American financial institutions is likely more cultural than pragmatic. As one community bank EVP stated in a recent research interview. “I’ll be damned if my customers are going to interact with a machine in one of my bank branches!”. O.K., so the topic is polarizing. But, is there a future for in-branch self-service in North America? We think so. Based on a Celent survey of North American financial institutions fielded in July 2012, in-branch self-service is destined to become somewhat commonplace – particularly among credit unions, who appear to be roughly twice as likely to adopt compared to banks. This should be a wake-up call to the curmudgeons who see no future in self-service based on the mistaken notion that consumers won’t be fond of the idea. [caption id="attachment_3194" align="aligncenter" width="300"] 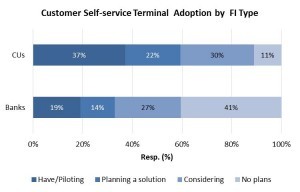 Credit unions are leading in in-branch self-service[/caption] From our research, when executed well using capable deposit automation and cash recycling devices, in-branch self-service can result in multiple benefits, including: • Reduced cost-to-serve • Extended service hours • Reduced cash handling costs • Fewer errors, fewer exceptions • Demonstrably improved customer satisfaction • Improved sales results ATM Marketplace posted an article extolling the virtues of in-branch self-service at BAWAG P.S.K., Austria's fifth largest retail bank. There are, of course, many ways to skin a cat. We found the use of in-branch self-service at BAWAG P.S.K. straightforward. More interesting is its use within Austrian Post Office facilities (or is it vice versa?). Celent’s 2012 Model Bank of the Year, RHB Bank (Malaysia), was so honoured for its innovative and effective launch of Easy by RHB, which deployed multiple Retail partnerships to lower costs and deliver prime retail placement. These included partnerships with Tesco and the Malaysian equivalent of the U.S. Post Office, POS Malaysia. That concept (below) also includes in-branch self-service, but the devices are not apparent in the picture. 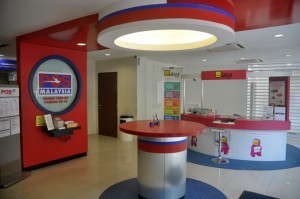 Retail partnerships appear less polarizing than in-branch self-service in banking. Witness the thousands of in-store branches. Honestly though, most implementations are traditional and, well – boring. Easy by RHB offers an engaging and also wildly successful alternative – one deserving consideration as financial institutions struggle with branch channel costs and eroding relevance in the “new normal” of retail banking. Celent is welcoming submissions for Celent Model Bank 2013 through 30 November 2012. Submissions are made online at http://www.celentmodelbank.com.