Create a vendor selection project & run comparison reports
Click to express your interest in this report
Indication of coverage against your requirements
A subscription is required to activate this feature. Contact us for more info.
Celent have reviewed this profile and believe it to be accurate.
25 July 2018
Bob Meara

Cash remains as relevant in retail as it has ever been. Although slowly declining as a percentage of point of sale transactions, the amount of cash in circulation continues to grow in the US. Managing this growing volume of cash remains problematic. Most US banks have invested in its automation through virtual vaults and branch-based recycling devices. Not so for most retail merchants. Banks have an opportunity.

Remote cash capture (RCC) is the deployment of secure, validating currency-accepting and recycling equipment (aka smart safes) at merchant locations coupled with remote management, information reporting and provisional credit mechanisms. It’s not a new idea. Rudimentary versions of RCC have been in use for 20 years in the US as a means to improve merchant cash cycle control. The advent of bank-offered provisional credit based on validated currency residing at the merchant location is a more recent phenomenon, with the first implementations in 2004. Its emergence caused a surge in interest and adoption of these devices. The offering of provisional credit by participating financial institutions has significantly improved the merchant business case for remote cash capture. The primary benefit of provisional credit is its enablement of wholesale reengineering of the cash cycle within merchants and between merchants, armored couriers, and banks cash vault networks. In the process, RCC removes the substantial cash handling burden historically carried by bank branch personnel. In short, RCC is a win-win-win wherever the merchant business case warrants.

RCC is noteworthy for the collaborative service delivery required to bring it about. Historically working in isolation, banks, safe manufacturers, and cash logistics providers are now collaborating to add considerable efficiency to what until recently had been an antiquated and error-prone cash cycle in many businesses. But RCC adoption has not set records. Both economic and systemic barriers have limited its adoption — but all that is changing. With US retail merchant utilization of just 10%, now is a perfect opportunity for banks to revisit their involvement in RCC. Here are five reasons why. 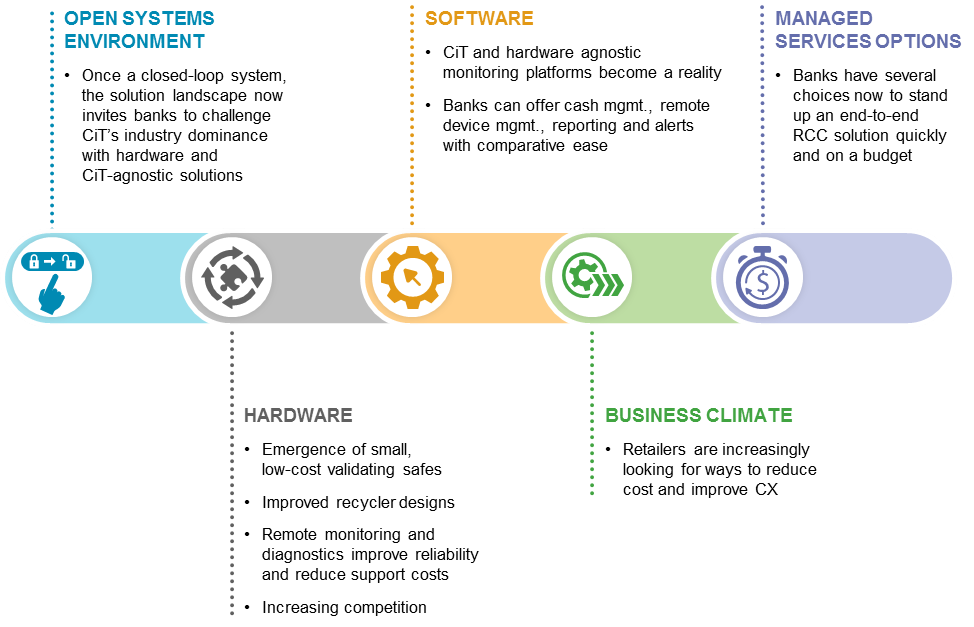 1. Open Systems Environment: The solution landscape is moving away from its historic CiT-dominated closed-loop genesis. Now, alongside proprietary CiT-led solutions are open system alternatives with the advent of third party, hardware and CiT agnostic software solutions. At present, proprietary CiT solutions account for roughly half the market. The ability for banks and hardware providers to offer retailers enterprisewide cash visibility and management independent of CiT is itself a game-changer.

5. Ideal Retail Business Climate: With the continued growth in digital commerce, retailers of all sizes are under pressure to improve same-store sales and reduce costs. In this climate, the value proposition of RCC is resonating with Store Operations, Loss Prevention, and Treasury alike. Moreover, even as cash accounts for a declining share of point of sale transactions, traditional approaches to its handling expose retailers to loss and their employees to harm.

It's not very often that a market segment undergoes this much favorable change over a short period of time. Wise banks are capitalizing on this. They are a small minority at present.