Mobile RDC: Getting to Yes

Create a vendor selection project & run comparison reports
Click to express your interest in this report
Indication of coverage against your requirements
A subscription is required to activate this feature. Contact us for more info.
Celent have reviewed this profile and believe it to be accurate.
9 December 2009
Bob Meara
Following on a February 2009 announcement with MFoundary, Mitek announced in December it had formed a strategic partnership with ClairMail to integrate its Mobile Deposit capability with ClairMail’s mobile banking platform. In so doing, the companies are making it faster and easier for US FIs with existing mobile banking solutions to offer mobile deposit (a.k.a. Mobile RDC). Celent applauds this effort. A preemptive move, pre-integration with mobile banking platforms corresponding to a significant percentage of mobile banking solutions only makes sense. But doing so won’t erase adoption barriers. Celent conducted research in August 2009 among 174 US financial institutions – just prior to USAA’s announcement of its Deposit@Mobile product. In the survey conducted primarily among product managers and senior executives in RDC deploying financial institutions, Celent found that risk and/or compliance concerns are holding banks bank by nearly a 2:1 margin versus any other adoption barrier. All the pre-integration in the world won’t address the lingering systemic risk paranoia around RDC. 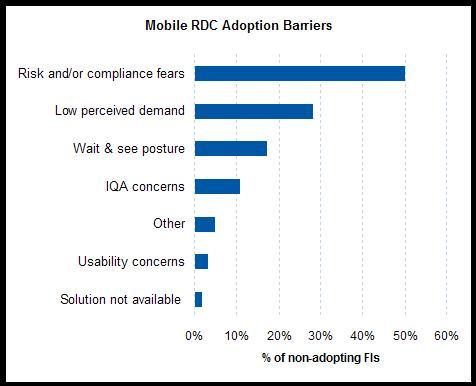 But risk can be justified in the face of adequate reward. That’s part of the current problem with mobile RDC. The #2 adoption barrier according to Celent research is low perceived demand for mobile RDC. When banks see adequate demand for the service, the perceived risk associated with solution delivery will be more easily assumed. So what’s behind the low perceived demand? Banks mention in interviews that consumers aren’t exactly melting the phone lines with requests for mobile RDC. Of course not – no one knows about mobile RDC yet! Too many banks confuse demand for a product or service with concept strength. Concept strength measures the viability of a product or service based on its ability to meet unmet consumer needs. Demand is a function of many variables including concept strength, awareness and pricing. In Celent’s research, mobile RDC appears to be an exceedingly strong concept among consumers; a “killer app” in fact. Demand will come rapidly, once more banks offer the service – generating awareness in the process. Anticipating strong future demand for mobile RDC, wise banks will be preparing.