Create a vendor selection project & run comparison reports
Click to express your interest in this report
Indication of coverage against your requirements
A subscription is required to activate this feature. Contact us for more info.
Celent have reviewed this profile and believe it to be accurate.
17 September 2010
Bob Meara
Celent fielded a survey among North American financial institutions in July to better understand the current state branch technology environment as well as likely midterm and longterm evolution. The results were surprising. [caption id="attachment_1781" align="aligncenter" width="563" caption="CUs Operate More Advanced Branch Networks"] 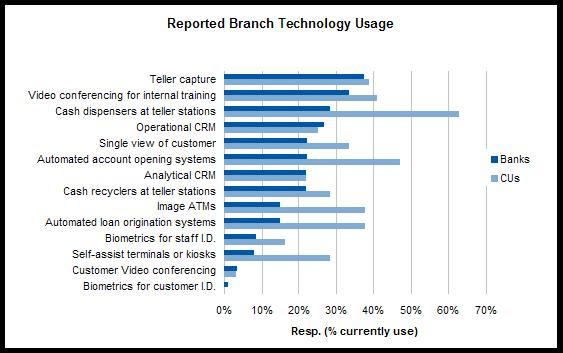 [/caption] CUs have a much more advanced branch environment. Compared to banks: – 34% more use teller cash dispensers, 8% more use teller cash recyclers – 25% more use automated acct. opening systems – 23% more use automated loan origination systems – 23% more use image ATMs – 20% more use in-branch self-service technology The only branch automation technology areas in greater use among banks than credit unions are CRM solutions which are more common among larger financial institutions. Why would this be? What led credit unions to more consistently invest in branch automation technology than banks? I recently spent a day with the Association of Credit Union Senior Officers hosted by EasCorp in Burlington, MA.. The interaction solidified my thinking. Size and simplicity. Credit unions skew small. Most are well below $500m in assets. Small ships can turn fast. Smaller organizations also lack the multiple silos found among large organizations. Lastly, CUs typically have a single line of business. In contrast, many banks have multiple lines of business competing for capital budgets. IT infrastructure. CUs are more likely to be operating a single branch environment from a core processor, and more CUs run real-time core systems. In contrast, a higher percentage of banks operate multiple environments and are more likely using solutions from independent software vendors. Multiple environments means more lengthy and costly implementations. It’s easier to say “no”. Culture. CUs have a parsimonious culture. In addition, they seem more driven to grow their member base through referrals than mass marketing campaigns. This historical drive towards improving customer service has resulted in a commensurate spend for automation. The complete research results are detailed in the Celent report: Branch Banking in a Multichannel World: What ever happened to the “branch of the future”?