Create a vendor selection project & run comparison reports
Click to express your interest in this report
Indication of coverage against your requirements
A subscription is required to activate this feature. Contact us for more info.
Celent have reviewed this profile and believe it to be accurate.
14 September 2010
Jacob Jegher
Chase appears to be in the middle of a massive outage affecting millions of online banking customers. Reports of the outage started to surface yesterday evening, and as of 4:00pm ET today, the site is still down. Chase's website indicates that the site is down due to "scheduled system maintenance." Huh? I can't say I know of a single bank that conducts system maintenance in the middle of the day, let alone for an extended amount of time! Chase hasn't released any details as to what the issue is here. There is speculation that there has been a security breach, but for the moment that is nothing but speculation so I won't address that unless the bank indicates otherwise. One thing is for sure - this isn't scheduled system maintenance. According to news reports it appears that the branches, phones, and ATMs are operating just fine. Basically this is one major headache for Chase customers who rely on this self-service channel. Many customers will incur fees resulting from late bill payments. This is something the bank will have to address with customers and is clearly a huge inconvenience for customers. Customers don't necessarily care what caused the breach (unless it is security related), they care about being able to have easy access to their accounts. The bank should be using social media to give customers a better idea of what is going on. The Twittersphere is ablaze with comments about the outage. Chase should be embracing social channels and stop hiding behind the "scheduled system maintenance" tagline. The bank should be using social channels and its website to at least direct customers to channels that are alive and well. EDIT 9/15 at 10:00am ET. Service appears to have been restored. EDIT 9/15 12:15pm ET. The site is down again. 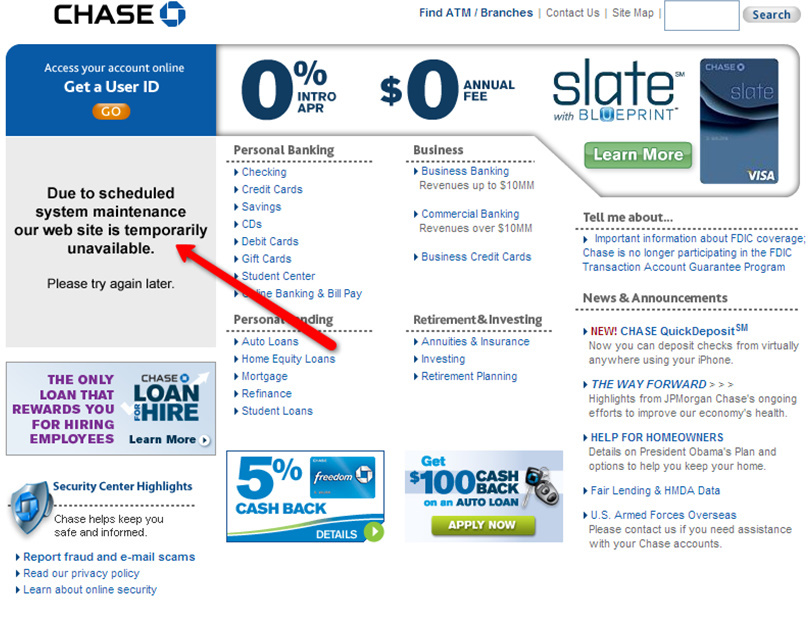