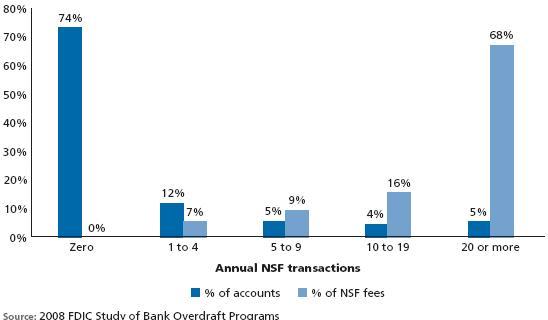 [/caption] The report concludes: “Institutions that can put a definitive fee transformation strategy in place are likely to find they are well-positioned for the future. In contrast, institutions that remain exposed to the choices of regulators and consumers do so at their own peril.” It might be too late. A regulatory imperative to act may be close aboard. The Obama administration has proposed the creation of a new agency empowered to write and enforce rules protecting consumers in financial transactions, removing that power from banking regulators. But as debate for that idea simmers, more proximate danger lies ahead in the form of legislation specifically targeted at outlawing courtesy overdrafts without consumer opt-in. According to the Washington Post, Sen. Christopher J. Dodd (D-Conn.) plans to introduce legislation requiring banks to get permission from customers, rather than allowing overdrafts automatically. If customers decline and then try to overspend, the transaction would be rejected. A similar bill is pending in the House. But hasty changes to bank’s DDA pricing policies could be risky. A careful strategy is needed – and time is of the essence it appears. Creative solutions may be the answer. Several very interesting and creative products have emerged in 2009 that will likely put the competitive squeeze on banks that remain reliant on NSF fee revenue. These deserve a close look.