Create a vendor selection project & run comparison reports
Click to express your interest in this report
Indication of coverage against your requirements
A subscription is required to activate this feature. Contact us for more info.
Celent have reviewed this profile and believe it to be accurate.
2009/08/27
Bart Narter
I, like many Americans, hold a Chase credit card. With their recent purchase of WaMu with a huge branch network on the West Coast, they were continuously making offers of increasing dollar amounts to open a checking account. After about a dozen of these, culminating with one for $150, I finally relented. The experience was an eye opener. I opened the account on August 13th, and because of an account I had closed many years ago, the customer service representative (CSR) at the branch was unable to set up internet banking. Strike 1. He called the operations center and was unable to solve the problem. I was told I would get an email with in two days. I didn't. I waited a week and still no email. Strike 2. I then went to wamu.com, called the 800 number when unable to log in and reached an off-shore call center. I immediately asked for a supervisor, who looked into the matter in real time. He told me that the incorrect form had been filled out in the operations center and that he would fill out the correct form. I should wait two days, then visit a branch where I should create a new internet banking account. I visited a branch and sat down with a CSR. We couldn't set up internet banking. The rep called on-line banking operations. It turned out that while the correct form was filled out in operations, it wasn't filled out correctly. Strike 3. I should wait a day and go back to a branch to authenticate with my debit card and PIN and open up internet banking. I have saying for customer service: Strike three and I'm out. Then I thought about what a great topic this would be for a blog post, and continued the process. I then went to the branch and tried to open up internet banking asking for the branch manager. It failed. Strike 4. The CSR and the branch manager printed out the error message and told me to go to the branch where I opened the account which was 8 miles down the road. I drove to the originating branch, where I asked to speak to the manager. I told her about the process I had been through, and that I would close the account if I didn't have internet banking set up this visit. She was willing to close the account. I also presented my business card and told her that I would be blogging about this experience. That finally got someone's attention. The manager sat down with a CSR, who had me authenticate and create an internet banking account. It failed. Stike 5. They then called the operations center, asked for a manager, spent a good bit of time on the phone and finally I received an email on my iPhone with a temporary password. It worked! I was late for my next meeting, but the account WITH internet banking was open. What went wrong here? 1. No one was willing to own the problem to resolution. Westpac Bank has an initiative called "Ask Once." When a customer contacts the bank with a problem, the first point of contact owns the problem and brings it to resolution. http://www.westpac.com.au/internet/publish.nsf/Content/WIOC+Ask+Once+Commitments Nedbank in South Africa offers a similar commitment. 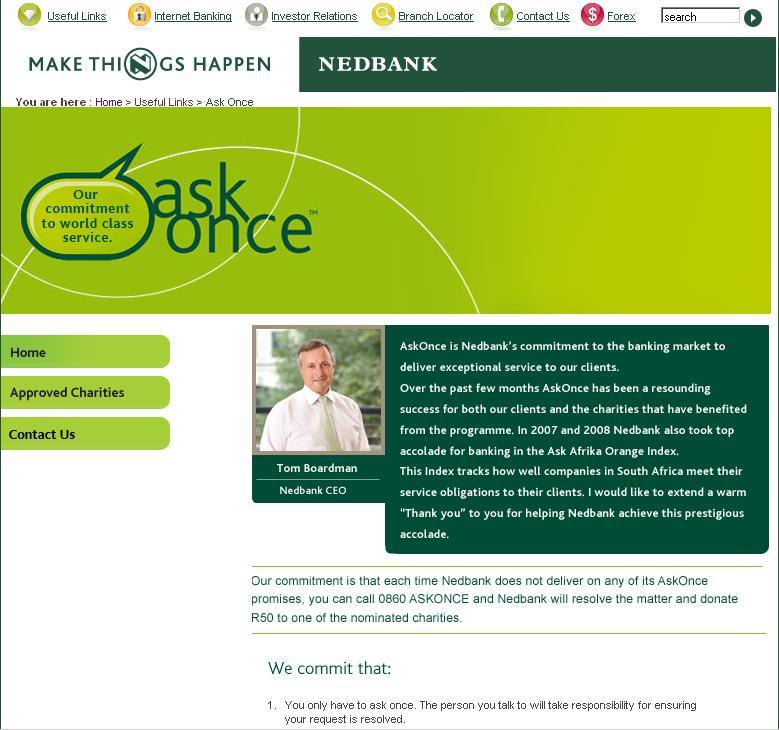 http://www.nedbank.co.za/website/content/askonce/askonce.asp Should American banks consider such an initiative? Until I identified myself as someone in the industry who would raise the issue with a blog post, the branch manager was more than willing to close the account rather than try to get internet banking to work and gain a customer. 2. The world of legacy systems makes it difficult to solve problems immediately. Between complex integrations, batch operations, and remote operations centers, it's hard to solve problems. 3. Off-shoring made the problem harder for me to solve. While off-shoring reduces cost, and works for simple requests, when there are complex problems they need to be escalated to more experienced long-time employees. What didn't go wrong? This wasn't an integration issue. I was on 100% WaMu systems here in Calfornia, but I'm told that we will be migrating over to Chase systems in October. I'll keep you informed. As banks cut costs are you seeing customer service levels drop? Is there an opportunity for banks to invest in service to gain share? I welcome your comments.