In search of a new 'dominant design' for the industry. What does insurtech have to offer?

Create a vendor selection project & run comparison reports
Click to express your interest in this report
Indication of coverage against your requirements
A subscription is required to activate this feature. Contact us for more info.
Celent have reviewed this profile and believe it to be accurate.
18 October 2016
Jamie Macgregor

There is little in the world of insurtech happening today that insurers couldn’t arguably choose to do for themselves ifthey were motivated to do it. They have the capital to invest. They have resources and could hire to fill gaps in any new capabilities required. They importantly understand the market and know how to move with the trends. And yet, despite having all of these things, they readily engage with the start-up community to do the things that arguably they could do for themselves. So, why is that?

Alongside these deep cultural differences, I believe that there is another angle worth exploring to help answer the question, and that’s the market’s maturity stage and, with it, the strategies required to succeed.

One model that helps explain this relates to the work of Abernathy and Utterback on dynamic innovation and the concept of the ‘dominant design’. To be relevant to this discussion, you first need to believe that we’re on the cusp of a shift from an old world view of the industry based upon a well-understood and stable design towards one where substantial parts of the insurance proposition and value network are up for grabs. You also need to believe that, for a period at least, these two (or more) worlds will co-exist.

So, here’s a quick overview of the model (in case you’re not familiar with it)…

Settling on a “Dominant Design”

First introduced way back in the mid-1970s and based upon empirical research (famously using conformance towards the QWERTY keyboard as an example), Abernathy and Utterback observed that when a market (or specifically a technology within a market) is new, there first exists a period of fluidity where creativity and product innovation flourishes. During this period, huge variation in approaches and product designs can co-exist as different players in the market experiment with what works and what does not.

In this early fluid stage, a market is typically small, and dominated by enthusiasts and early adopters. Over time, a dominant design begins to emerge as concepts become better understood and demand for a certain style of product proves to be more successful than others. Here, within an insurance context, you'd expect to see high levels of change and a preference for self-build IT systems in order to control and lower the cost of experimentation.

Once the dominant design has been established, competition increases and market activity switches from product innovation to process innovation - as each firm scrambles to find higher quality and more efficient ways to scale in order to capture a greater market share. This is the transitionary stage.

Finally, at the specific stage, competitive rivalry intensifies spurred on by new entrants emulating the dominant design, incremental innovation takes hold and a successful growth (or survival) strategy switches to one that either follows a niche or low-cost commodity path. Within an insurance context, outsourcing and standardisation on enterprise systems are likely to dominate discussions.

Building upon the co-existence assumption made earlier, within the world of insurtech today, there are broadly (and crudely) two types of firm: (1) those focused on a complete proposition rethink (such as Trov, Slice and Lemonade); and (2) those focused on B2B enablement (such as Everledger, Quantemplate and RightIndem). The former reside in ‘Fluid’ stage (where the new ‘dominant design’ for the industry has not yet been set and still may fail) and the latter in the ‘Transitionary’ stage (where the dominant design is known, but there are just better ways to do it). 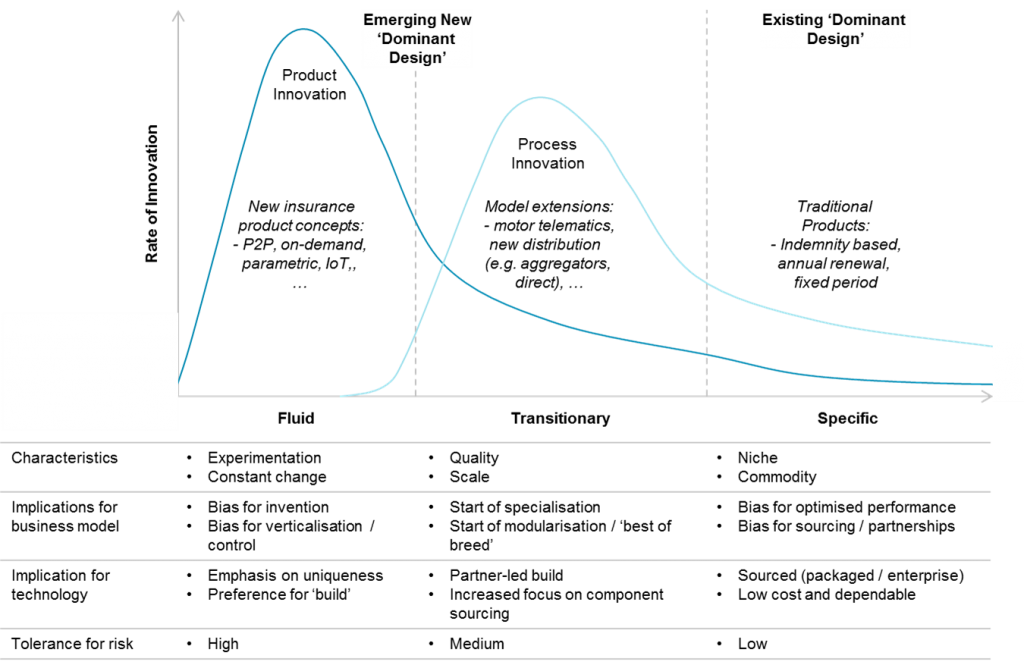 Outside of insurtech, within the 'Specific' stage, there is the traditional world of insurance (where nearly all of the world’s insurance premiums still sit by the way) that is dominated by incumbent insurers, incumbent distribution firms, incumbent technology vendors, and incumbent service providers.

What I like about this model is that it starts to make better sense of what I believe we’re seeing in the world around us. It also helps us to better classify different initiatives and partnership opportunities, and encourages us to identify specific tactics for each stage – the key lesson being "not to apply a ‘one-size fits’ all strategy to the firm".

Finally, and more importantly, it moves the debate on from being one about engaging insurtech start-ups purely to catalyze cultural change (i.e. to effect the things that the incumbent firms cannot easily do for themselves) towards one begging more strategic and structural questions to be asked, such as will a new ‘dominant design’ for the industry really emerge?, what will be its time-frame to scale?, and what specific actions are required to respond (i.e. to lead or to observe and then fast-follow).

Going back to my original question “What does insurtech have to offer?”. Insurers can do nearly all of what is taking place within insurtech as it exists today by themselves…but, as stated at the start of this blog, if, and only if, they are motivated to do so.

And there’s the rub. Many incumbents have been operating very successfully for so long in the ‘specific’ stage optimizing their solutions that making the shift required to emulate a ‘fluid’ stage is a major undertaking - why take the risk?. However, this is not the only issue that is holding them back. For me, the bigger question remains one of whether there is enough evidence to show the existence of an emerging new ‘dominant design’ for the industry in the ‘fluid’ stage that will scale to a size that threatens the status quo. Consequently, in the meantime, partnering and placing strategic investments with insurtech firms capable of working in a more ‘fluid’ way may offer a smarter more efficient bet in the meantime.

In a way, what we’re seeing today happening between insurers and insurtech firms is the equivalent of checking out the race horses in the paddock prior to a race. Let the race begin!