Blueprints for the Next-Gen Zengin, Part 1

Create a vendor selection project & run comparison reports
Click to express your interest in this report
Indication of coverage against your requirements
A subscription is required to activate this feature. Contact us for more info.
Celent have reviewed this profile and believe it to be accurate.
2 August 2016
Eiichiro Yanagawa

This post series examines initiatives to accelerate the development of Japan’s payment infrastructure through the lens of the Zengin System—the heart of this infrastructure. In addition, this series distills how cutting-edge technology is being applied and imagines the evolution of the financial services landscape as we enter the rapidly evolving, brave new world of fintech, or financial technology.

The Zengin System is the network system behind Japan’s payment settlement system, linking domestic financial institutions online and enabling the transfer of money such as remittances between banks, including payroll. Since its launch in 1973, the system has been renewed multiple times and has grown in terms of transaction volume, connections to financial institutions, and accommodating the latest in technological innovation. Put simply, the Zengin System and the Bank of Japan Net system (BOJ-NET) have played instrumental roles in Japan’s financial market infrastructure, made up in part by the interbank payment network and payment and settlement system.

At the heart of Japan’s interbank payment settlement system is the BOJ-NET Funds Transfer System (BOJ-NET). BOJ-NET is used for a broad range of payments including settlement of cash transfers between financial institutions in addition to settlement for transactions of securities such as Japan Government Bonds and derivatives transactions. Settlements for transactions of funds involving current account deposits at the Bank of Japan are processed via BOJ-NET account deposits.

Meanwhile, the Domestic Fund Transfer System provides centralized settlement of funds between participating financial institutions for domestic exchange transactions including payments. The transactions are processed by the Zengin Data Telecommunication System (Zengin System), under the management of the Japanese Banks’ Payment Clearing Network (Zengin Net), which was established by the Japanese Bankers Association (JBA). Net differences in payments among participants are settled via the BOJ-NET FTS. In other words, the Zengin System, in addition to undertaking settlement of funds transfers between financial institutions via BOJ-NET, also serves as the hub system, sending, receiving, sorting, and aggregating fund transfer messages—the backbone of the payment services underpinning the nation’s financial system. 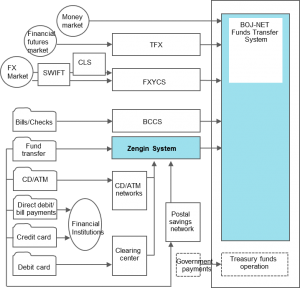