Insurance in Europe: 2017 Business and IT Priorities

Create a vendor selection project & run comparison reports
Click to express your interest in this report
Indication of coverage against your requirements
A subscription is required to activate this feature. Contact us for more info.
Celent have reviewed this profile and believe it to be accurate.
14 June 2017
Nicolas Michellod
Jamie Macgregor

Despite the tough economic environment, European insurers continue to drive their search for profitable growth, largely through a combination of distribution initiatives and niche client hunting.

Celent has released a new report titled Insurance in Europe: 2017 Business and IT Priorities. The report was written by Jamie Macgregor, a Senior Vice President, and Nicolas Michellod, a Senior Analyst, both with Celent’s Insurance practice.

The economic environment remains tough for insurers in Europe. Despite this, European insurers continue to drive their search for profitable growth, largely through a combination of distribution initiatives and niche client hunting. Many insurers have accepted the new environment and are changing their strategies to grow within it.

Innovation has become the top business priority influencing European IT investment plans in 2017. About two-thirds of European insurers consider easing new business generation (via agents, brokers, and prospects) as their top priority (rated very high or high) within their digital programs. Approximately 85% of European insurers are monitoring insurtech activity. Generally, it’s only the larger firms which actively invest in innovation vehicles, such as incubators, accelerators, or venture capital.

“Innovation and insurtech appear to have captured the imagination of many insurers across the market, with approximately 85% within our sample actively monitoring the market,” commented Macgregor.

“Despite interest in insurtech, investment in the core business remains a priority with opportunities to be had in digital distribution, automation, and improved risk insight as a consequence of better analytics,” Michellod added. 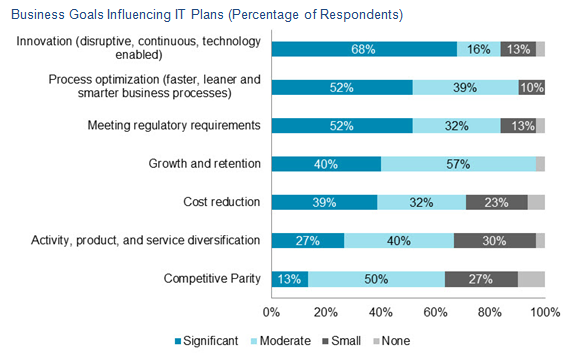