Create a vendor selection project & run comparison reports
Click to express your interest in this report
Indication of coverage against your requirements
A subscription is required to activate this feature. Contact us for more info.
Celent have reviewed this profile and believe it to be accurate.
2016/07/13
Zilvinas Bareisis

I must admit, I lost count how many times we at Celent have written and talked about unintended consequences of regulation. This is the latest installment.

As most people know, PSD2 has introduced new card multilateral interchange fee (MIF) limits in Europe. Debit card transactions across Europe have been capped at 0.2% of transaction value, while for credit cards, the limit is 0.3%. This is often used as an example of regulators bearing down on the issuers, and in many cases, especially for credit cards, it is indeed a significant reduction of fees charged previously.

Visa interchange rates have varied over the years, but immediately prior to March 2015, Visa interchange for consumer debit card chip & PIN transactions in the UK was flat 8p per transaction. In March 2015, those fees changed to 0.2% + 1p, but were capped at 50p. The extra penny could be charged, because the UK Payment System Regulator allowed an interim period where the cap of 0.2% could be applied at an aggregate rather than an individual transaction level. As the individual interchange fees were capped at 50p, that meant that in aggregate they didn't exceed the required 0.2% limit. However, we understand that as of September 1, 2016, Visa UK is removing both the extra 1p and the cap of 50p and setting debit interchange fees at 0.2% per transaction, as required by PSD2.

As the chart below demonstrates, transactions less than £35 become cheaper than 8p set prior to March 2015. At £41.34, which is the latest average debit card transaction value, the current charges are at 9p and new ones post September will be 8p, the same as before. However, transactions above that amount and up to £250 are already more expensive than 8p today and will remain so post September. 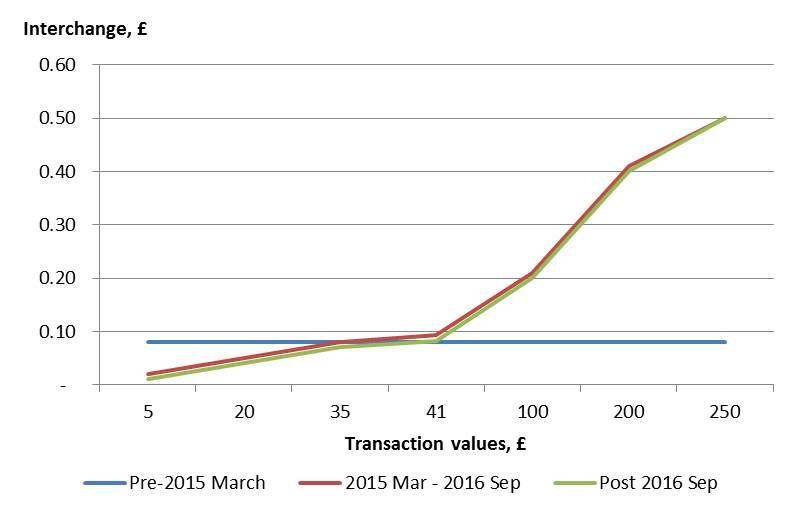 The real difference is for transactions above £250. The removal of 50p cap and charging at a straight 0.2% means that a £10,000 transaction (for example, when buying a used car) will now cost a merchant £20 in interchange versus the 8p the merchant paid before the regulation came into effect. 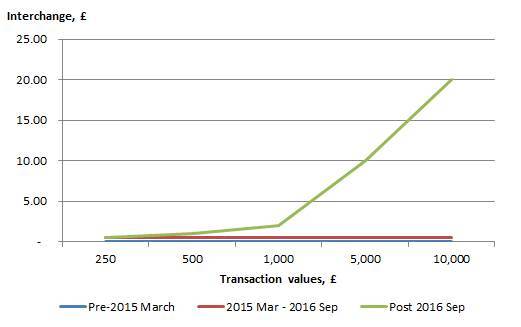 What about Brexit? Will these European regulations still apply in the future? The answer for domestic transactions is, yes. The interchange caps are now enshrined in the UK regulation and are independent of the UK's status in Europe. More broadly, the Payment Systems Regulator announced immediately following the referendum results that "current payments regulation deriving from the EU will remain applicable until any changes are made, which will be a matter for Government and Parliament." Perhaps a more interesting question is what would happen with transactions between the UK and Europe in the future. If the UK is no longer part of the EU, would the payment networks decide that such transactions should be treated as inter-regional rather than intra-regional? Only time will tell.

So, what are the merchants with larger than average debit card transaction portfolios going to do? In the short term, some might start surcharging to pass the costs on to the customer; longer term, others might start exploring other opportunities presented by PSD2, and consider becoming Payment Initiating Service Providers (PISP) to move customer funds directly from consumer bank account to theirs, shunning cards altogether. Almost inevitably, the most proactive ones will shop around to see which acquirers offer the best deals; remember, these are interchange fees, not the actual merchant charges, and it is up to the acquirers to decide how much they charge their merchants. However, once again, the consequences of a regulation are not quite as originally intended.