Looking Beyond Brexit: In Today’s Connected World, There is No True ‘Exit ’

Create a vendor selection project & run comparison reports
Click to express your interest in this report
Indication of coverage against your requirements
A subscription is required to activate this feature. Contact us for more info.
Celent have reviewed this profile and believe it to be accurate.
1 July 2016
Eiichiro Yanagawa

A storm of momentous scale hit financial markets as it became clear that UK voters had decided to leave the EU. This certainty drove investors to seek lower-risk assets and triggered a spike in yen buying. The yen surged more than 7 yen against the dollar—as the currency marked the most volatile day in its history. Indeed, the initial impact from the UK vote was greater in Tokyo than the immediate shock following the collapse of Lehman Brothers. In around a three-minute span a bit past 11:40 AM on June 24, the yen jumped from 103 yen to 99 yen versus the dollar; likewise, over a few hours the yen skyrocketed nearly 20% versus the pound, moving from 160 yen to 135 yen.

The “Brexit shock” first jolted the Asian markets, sending the Nikkei average down nearly 8%, the largest drop in 16 years. Markets in Europe followed suit, with Germany and France’s key indices tanking 7% and 8%, respectively, and exchanges in Italy and Spain also reeling. The ensuing sell-off in the UK sent the nation’s FTSE100 (Financial Times Stock Exchange 100 Index) down more than 8% at one point before it settled down 3% on the day after investors began buying back into the market later in the day. The US market was the last major market to feel the initial impact of the referendum, which sent the Dow average tumbling 610.32 points, or 3.4%, to sink to a three-month low. 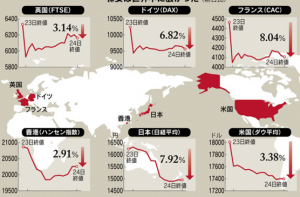 In short, the vote set off a chain reaction sell-off that rippled across and disappointed capital markets the world. This all prompts the question: What exactly were we expecting?

As one of my esteemed colleagues has already written, we were expecting individual markets integrated into one larger, global market. This vote diverges from that view. The vote will impact the pending merger between Deutsche Börse and the London Stock Exchange Group, and has sent an important message to policymakers that could have implications for the T2S (Target 2 Securities) platform of the European Central Bank and MiFID II (Markets in Financial Instruments Directive), which provides for harmonized regulation of investment services across EU member states. In addition, Europe has been at the forefront in terms of shortening and streamlining settlement cycles, namely with T+1 (transaction day plus one day) in bond markets and T+2 in securities markets. Likewise, London has been at the vanguard in fintech, with its Level39 a very visible and noteworthy pioneering presence. The initiative has continually focused on how to devise innovative business models that fueled by the latest technology and know-how. This has been a debate on innovation divorced from the remain-leave issue and rather presupposing ongoing integration. As the events of June 24 aptly demonstrated, markets are inexorably linked globally, and when it comes to commerce and the flow of capital there is ultimately no out, no real “exit.”

From Monday, jockeying in global markets effectively changed from a focus on low-latency market competition, taking on a new dimension expand the geopolitical strategy discussion over resource allocation. A majority of Japanese companies have their European headquarters in the UK and have positioned the bulk of their regional corporate resources in the suburbs of London. The background to this was a presumption not only that the EU would be a single market, but also that it enabled the companies to be “in” the global market. It is more than likely that companies in addition to HSBC will be re-examining whether they also should “remain” or “leave.”

Across the realms of politics, economics, and currency, information technology has fused together markets across the world. The recent referendum can be said to fly in the face of this historical trend. In either case, it prompts the question whether this is a crisis or an opportunity. Of course, it may be incumbent upon politicians to respond to the excesses of capitalism. However, when it comes to financial services, consumers the world over seek modernization, digitalization, and innovation, not a return to the past.

Do follow our Brexit posts from the insurance team as well.