Create a vendor selection project & run comparison reports
Click to express your interest in this report
Indication of coverage against your requirements
A subscription is required to activate this feature. Contact us for more info.
Celent have reviewed this profile and believe it to be accurate.
19 August 2016
Bob Meara

I subscribe to Marcus & Milichap’s research blog. Getting my head out of banking from time to time is refreshing and provides useful perspective. A recent blog post commented on the changing make up of commercial property construction as a result of the continued growth in digital commerce. The completion rate of new construction (measured in millions of square feet) has been roughly a third of its pre-2008 boom. Dramatic indeed!

No big mystery, however. As retailers close stores (Macy’s is a recent example), property developers must re-adjust their development to sustain revenue growth. As large merchants exit, they’re being replaced with smaller service providers – restaurants, medical practices, financial planners and grocery stores – mostly services that are less likely to migrate online. Digital plays a role in my healthcare, for example, but I’m still going to see the doctor next week for an annual physical. It helps to do that indoors.

That got me thinking. Three years ago, Celent predicted a steep decline in US branch density based on an analysis of branch dynamics in other developed markets and changes in store densities in other retail categories. In part, we argued that reductions in store densities have been non-uniform across retail categories for a reason. In the final analysis, as commerce becomes more digital, fewer brick and mortar stores will be needed to fulfill the same level of demand. We argued that two variables play an important role: the susceptibility to digital self-service and the degree of product differentiation. Arguably, retail banking is highly susceptible. Loan rates are easily compared online, but you may want to try on a new pair of pants before buying. 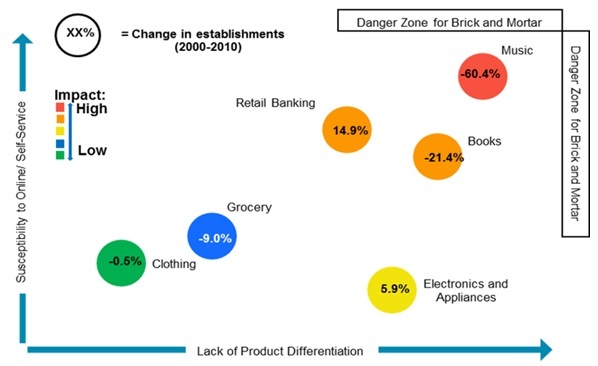 So, why is the reduction in US branch density occurring more slowly than other retail categories? In part, because industrywide retail banking sales mix lags other retail categories in its migration to digital. How do we know this? Through June 2016, digital commerce accounted for 13% of all US core retail sales. How does that compare to retail banking? According to a survey of Celent’s Branch Transformation and Digital Banking research panels, US banks and credit unions lag considerably, with roughly 90% of sales occurring in the branch or contact center.

Here’s one reason I think this is so (see below). 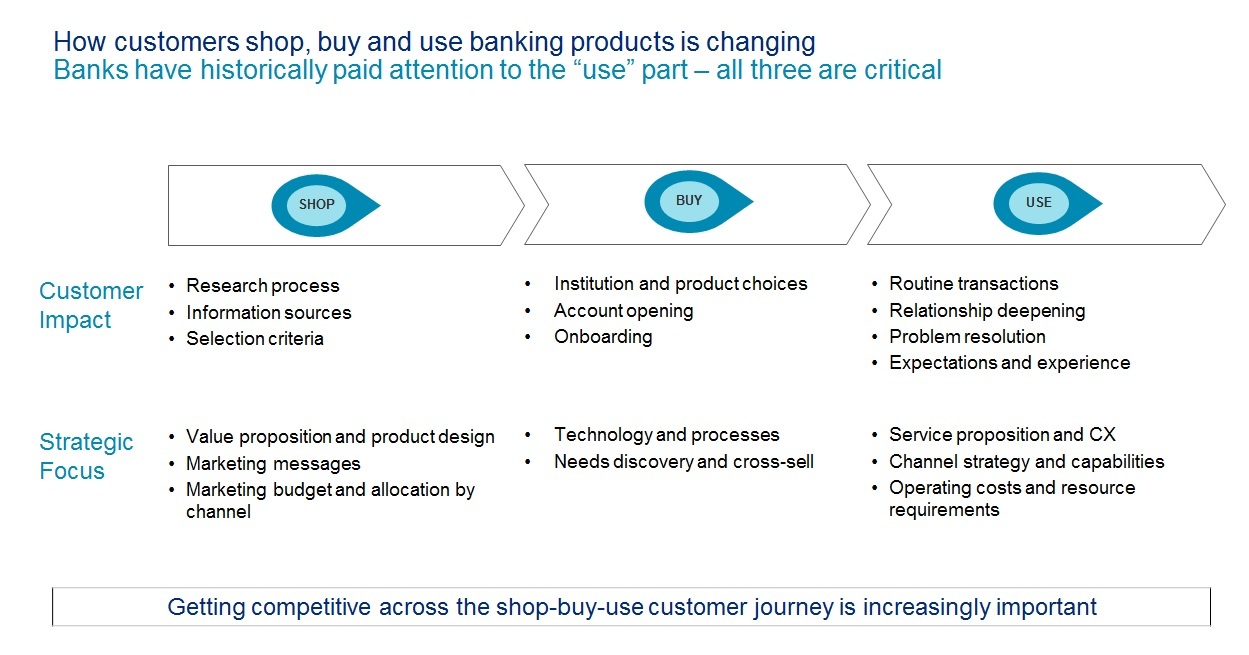 Banks have invested heavily in migrating transactions to self-service (the “use” part of financial services) with polished transactional capabilities in the digital channel, but have paid comparatively less attention to making shopping for and buying financial services digitally frictionless. That’s now a high priority for a rapidly growing number of institutions at present. Good thing!

As banks do so, they will be rewarded with rapidly growing digital sales. In the past 12-months ending in June, total non-store retailer sales grew 14.2% YOY according to the U.S. Census Bureau and Marcus & Millichap Research Services. Over the same time period Bank of America’s digital sales grew 12% YOY, representing 18% of total sales according to its July financial results presentation.

So, will banks eventually lead in retail digital sales growth? Absolutely – Bank of America is already there!