Faster Than A Speeding Payment: The Race To Real-Time Is Here

Create a vendor selection project & run comparison reports
Click to express your interest in this report
Indication of coverage against your requirements
A subscription is required to activate this feature. Contact us for more info.
Celent have reviewed this profile and believe it to be accurate.
17 July 2016
Gareth Lodge

It’s been two years since my last reports on real-time payments, and much has happened, not least of which is the perception and understanding the industry has. As a result, the discussions in many countries that don’t have real-time payments infrastructure are now when they will adopt, rather than why would they adopt. Yet in that intervening period, it’s not just the pace of adoption that has accelerated, but that market and thinking around real-time itself has matured as well.

As a result, I’ve just written a new report titled Faster Than A Speeding Payment: The Race To Real-Time Is Here.

Central to the report is the fact that rather than just being “faster ACH”, it is increasing being seen (and should be seen!) as a fundamentally different payment type than anything that has gone before it. As a result, banks, whether they are about to implement their first system or whether an existing user, need to think about where real-time is heading, and to plan accordingly.

This thinking – and more - is set out in the report, and seeks to explore the following questions:

The pace question is clearly indicated in one of the charts from the report: 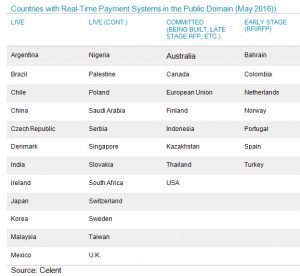 From the 32 countries identified in the initial report (and the criteria we used, which is important!), in 2 years we’ve gone to 42 countries, cross-border systems, and countries who claimed they didn’t see the reason why they would adopt, at least one (the US) is currently reviewing more than 20 systems, all of which might co-exist.

The report goes in to much more detail, but there is a clear implication. Real-time is firmly here, and it’s increasingly being seen as the payment system of the future. Banks that who try to limit the scope of projects today then may be saving themselves money in the short -term, but they are likely to creating more work, more costly work, in the future. Given that most payment networks have a life span measured in decades, it’s a long time to be stuck with a compromise.

Ultimately, however, it’s about building a digital bank as well. Without doing so, banks will be providing the tools to their competitors, yet unable to use them themselves. Adding a real-time solution to a process that takes weeks, such as a bank loan, makes no difference in terms of the proposition. Fintechs are able to use a real-time payment as the enabling element of a digital experience because all of the solution set is real-time – an instant decision and payment of the loan sum is a game changer.

Digital payments without a digital bank would seem futile.