Create a vendor selection project & run comparison reports
Click to express your interest in this report
Indication of coverage against your requirements
A subscription is required to activate this feature. Contact us for more info.
Celent have reviewed this profile and believe it to be accurate.
20 October 2016
Bob Meara

Since my coverage areas include branch and ATM channel technologies, I often get asked, “What distinguishes successful branch channel transformation initiatives?”

Questions like this cut to the chase. Spare me all the charts & graphs, Bob, just tell me what successful institutions are doing. Fair enough. But, don’t we all want easy answers? How many diets are out there being promoted? They all sound pretty easy. If only...

But, I got to thinking… There are at least two hallmarks of successful branch transformation initiatives, despite there being a diversity of approaches and outcomes. Here goes:

Except for the smallest of community banks, branch channel transformation involves two, concurrent initiatives – the current network and the future network. Why’s that?

Most banks appear to associate branch channel transformation with radical changes in the branch operating model. Arguably, for many banks, radical changes are needed. At the same time, very few North American financial institutions appear to have a clear vision of what they’d like to build. The “branch of the future” is not yet in focus. This is understandable given the cacophony of vendor voices urging banks to adopt a growing variety of physical designs, automation approaches, and paths to superior customer engagement. Banks should, in Celent’s opinion, embark on an ambitious branch of the future project with deliberate caution and methodical rigor. Proceeding in this manner — even with swift internal decision-making — will take several years. And implementation is rarely a “big bang.” Instead, new designs are rolled out over time, taking years to reach their eventual maximum impact.

The problem with this approach is two-fold. First, it tends to justify inaction until a clear future branch vision is embraced. After all, how can one begin a journey unless the destination is clear? The second problem is more significant — it confuses developing a future branch design vision with preparing the existing branch infrastructure for those new designs. For example, physical design is clearly a new branch design element. By contrast, underlying software platform choices and how new loans and deposit accounts get originated can impact both current and future branch designs.

I’ve spoken with too many banks who, for example, postpone a teller image capture initiative on legacy branches until their “future branch” design is finalized. Most institutions are under pressure for short-term results. Most branch transformation efforts won’t produce a near-term ROI. Two projects are needed – one on the current network and another focused on the future network – with close coordination between the two. Something like this: 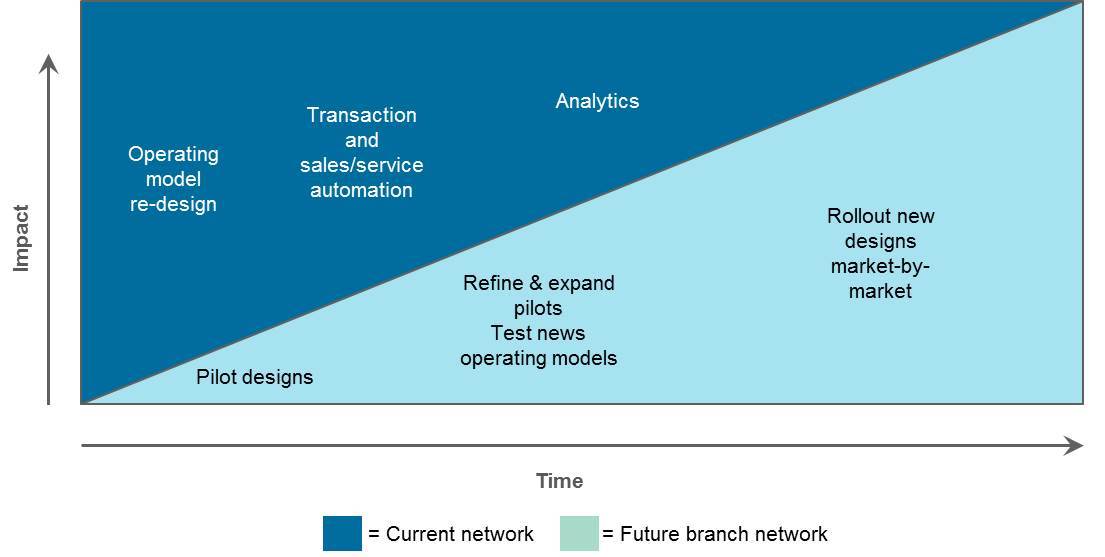 2. Lead with Human Capital, Not Technology

The second hallmark has to do with when human capital plans are implemented – prior to, coincident with, or following future branch initiatives. Strongly-held opinions abound. What appears to resonate broadly is this: branch interactions are becoming more about sales/service and less about transactions. This invites new, more highly-trained roles with a different skill mix.

The prevailing argument for positioning human capital strategy at the tail end of the journey is typically cost-focused. No one wants to pay the price to recruit, train and compensate Universal Bankers – only to spend much of their day playing the teller role.

The prevailing argument for leading with human capital is user experience-focused. In the final analysis, what differentiates a branch experience from the constantly improving digital experience, if not face-to-face engagement? Leading with human capital may indeed be a more costly experiment. But every financial institution I’ve interviewed who did so are glad they did. Conversely, every institution I’ve interviewed who didn’t (many of them) wishes they had.