Create a vendor selection project & run comparison reports
Click to express your interest in this report
Indication of coverage against your requirements
A subscription is required to activate this feature. Contact us for more info.
Celent have reviewed this profile and believe it to be accurate.
22 December 2016
James O'Neill Stephen Greer

The core banking system (CBS) platform is the primary system of record for the accounts of a bank, and thus forms the technological foundation on which the entire bank operates. The process of switching out a core system has been likened to changing the engine on an aircraft in flight. These transformations can be costly and risky. It’s important that institutions choose the right vendor.

The resistance to change has resulted in a situation where many banks are running systems that are decades old. In the last 10 years, the rise of digital and the evolution of delivery channels have added stress to these platforms. As customer needs continue to evolve, many financial institutions are finding their core systems are ill-equipped to meet today’s requirements. Contrary to what many may think, there’s no “best” core banking system. Each platform has strengths and weaknesses, but all of them generally play to specific markets or segments. The decision to go with one system over another will depend largely on the needs of the institution. Nowhere are the hard economics of CBS transformation more relevant than in the large bank market, where the cost of licensing and maintaining a CBS platform pales in comparison with the investment in customized functionality, workflows, and interfaces made by the large banks to ensure that the CBS platform continues to work within their existing IT ecosystems.

“The fundamental challenge of keeping older CBS platforms up to date is a primary reason why back office functionality relating to new services like mobile banking have been implemented in these external back office systems rather than in the CBS platform itself,” commentedO’Neill, a Senior Banking Analyst.

“Banks are undoubtedly finding their CBS platforms represent an impediment to agility in creating new banking services, but through the technological adaptation of middleware and other system workarounds, banks have generally been able to stave off full-blown core replacement,” added Greer, a Banking Analyst. 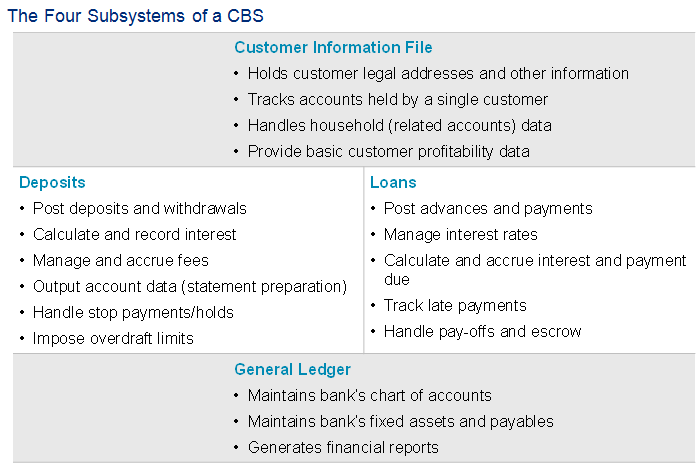