Create a vendor selection project
Click to express your interest in this report
Indication of coverage against your requirements
A subscription is required to activate this feature. Contact us for more info.
Celent have reviewed this profile and believe it to be accurate.
We are waiting for the vendor to publish their solution profile. Contact us or request the RFX.
26 October 2016
Eiichiro Yanagawa

Japan’s wealth management market differs significantly from the global market in a number of ways.

Individual financial assets are managed with an emphasis on security and primarily allocated toward deposits, while potentially highly profitable securities — in particular, equity — are not typically preferred. The asset management emphasis toward savings deposits has persisted through the nation’s deflationary phase, but with the introduction of inflation targets and drastic monetary easing, this approach increasingly makes less sense. This leaves one wondering when the tide will change and who or what will trigger a change.

In January 2014, the government introduced a new initiative to encourage a shift in behavior from saving to investing. Called the Nippon Individual Saving Account (NISA) the program is designed to support the stable growth of household assets while boosting the availability of capital available for economic growth. While a combination of macroeconomic factors — including changes in exchange rates, a rebound in stock prices, and an upturn in the economic environment — seems to have the market headed in a more positive direction, Japan’s investment market still differs significantly from Europe’s and North America’s, particularly in areas such as the diversity of the composition of individual asset holdings, the investment environment for individual investors, and investment literacy. 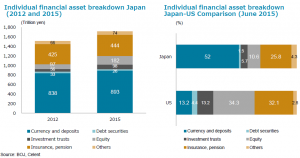 Growth in the Mutual Funds Market

Against this backdrop, the growth in funds allocated to publicly offered mutual funds has been particularly prominent. In May 2015, total assets under management topped 100 trillion yen for the first time, driven by an influx of money into open-ended mutual funds. As of the end of September 2015, this had reached 75 trillion yen, up 60% from 2012. This rise has been spurred not only by market value factors (a rise in asset prices) driven by increasing stock prices and a weaker yen, but also by trade-related factors — that is, new inflow of capital. Open-ended mutual funds turned positive in the first half of 2014, and in the second half of 2015, they returned to levels seen prior to the 2008 collapse of Lehman Brothers.

Two core factors are behind the growth in the mutual funds market: increases in channels and products. Channel growth principally signifies a diversification of intermediaries and intermediary types for bringing together mutual fund management firms and investors. The market was opened to banks in December 1998. After an eventful subsequent period, the formidable growth of the banking channel has put it nearly on par with the securities firm channel. As of the end of 2015, banks’ mutual fund sales, including private placements, had reached 64 trillion yen, accounting for 46% of the market; moreover, at the same time, the banking channel has similarly diversified its collective product lineup, including the following areas:

Among these, the inflow of funds into discretionary investment mutual funds wrap accounts has been particularly prominent. Following 2012, the sector saw an influx of 1.4 trillion yen in the second half of 2014, and more than 1.2 trillion yen in the first half of 2015. This flood of funds has been fueled not only by the growth of products that meet consumer needs and more channels offering greater convenience, but also due to a shift in emphasis in sell side strategy from stressing sales commissions to one putting more weight on asset management balance and performance.

Until now, retail investors in Japan have exhibited a preference for major brands and the stability associated with them, resulting in investors becoming comfortable with an investment environment with a high degree of reliance on the sell side, namely the strategies of major financial groups. Further fueling the current surge in low-cost investing, which can expect high if unstable returns, will require raising investor financial literacy, providing novel products and services, and forging new sales channels that harness technology. There is vast “blue ocean” potential here for robo-advisory services to gain a foothold and thrive in the Japanese market.