Create a vendor selection project & run comparison reports
Click to express your interest in this report
Indication of coverage against your requirements
A subscription is required to activate this feature. Contact us for more info.
Celent have reviewed this profile and believe it to be accurate.
4 November 2016
Daniel W. Latimore

It’s remarkable that in just five years Money 20/20 has gone from a standing start to having about 11,000 [sic – you read that right] registrants. We go to many conferences throughout the course of the year, and the growth in Money 20/20 is unprecedented in the financial services space (as the chart shows). We’ve used data from sponsors and from blogs to assemble the numbers below; there’s no doubt that Money 20/20 is now the 800 pound gorilla in the space. 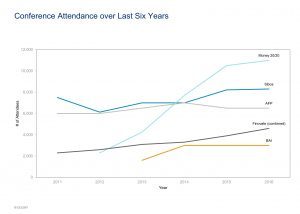 Money 20/20’s growth is due in large part, we believe, to the ecumenical approach that the organizers have taken toward the payments ecosystem. Rather than focusing on just banks and vendors, the show includes processors, merchants, venture capitalists, startups, and other various and sundry hangers-on (including analysts). The organizers’ excellent marketing has played a role, to be sure, as has their interesting mix of commercialism and insightful content from the various participants on stage in both plenary and track sessions. But in many ways Money 20/20 has hit a particular point in time just right, recognizing that the payments ecosystem is bigger than just banks, and needs a forum where every participant could get together. The tragedy: this event could have belonged to any of the incumbent organizers of conferences, but they didn’t seize the initiative.

A final thought on substance: while the need for cooperation and collaboration across the ecosystem was universally acknowledged, as was the precept that incumbents and fintechs must partner (hallelujah!), it was interesting that one of the most ambitious payment collaborations of all time, MCX, was nowhere to be seen. It, at least in 2015, was a bridge too far.