Needless Controversy in the Branch vs. Digital Debate

Create a vendor selection project & run comparison reports
Click to express your interest in this report
Indication of coverage against your requirements
A subscription is required to activate this feature. Contact us for more info.
Celent have reviewed this profile and believe it to be accurate.
16 March 2017
Bob Meara

In a previous post I argued for the enduring importance of human, face-to-face contact in financial services. By the reactions I received, you’d think I was purposefully inciting controversy.

Honestly, I expected a mixed response: push back from those who are invested in advancing digital banking and agreement from branch technology vendors. We all have self-serving tendencies. But, I did not expect – nor intend – to precipitate such controversy. What is so heretical to my digital brethren’s ears that they would be so obviously offended with my advocacy that banks pay attention to both digital and in-person engagement mechanisms? That was, after all, the essence of my previous post which began with “Digital needs to be a top technology priority among financial institutions”.

I think part of the issue here was addressed in a previous post, Three Mistakes Banks Make. We are at risk by oversimplifying things that are inherently complex. In so doing, we fail to appreciate diversity of customer needs or preferences. Much of the digital/branch debate speaks to binary outcomes. Reality is much more nuanced.

This tendency reminds me of a well-conducted consumer research initiative that resulted in January 2016 news that for the first time, “mobile banking exceeds branch banking”. It made quite a splash in the press, for obvious reasons. The data is both relevant and important. It offers clear evidence of the growing importance of digital banking. But the common interpretation overstated digital’s current level of influence. 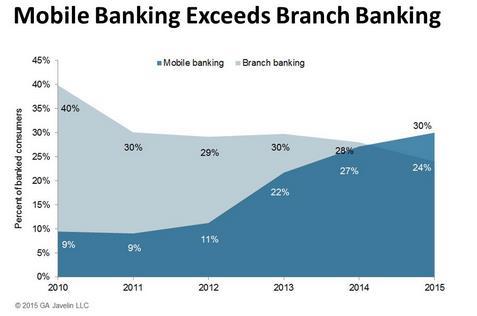 My issue is not with the research, but how it was interpreted. Many trumpeted the research as evidence of the final nail in the branch banking coffin. “See, the branch is dead!” was the nominal conclusion offered by most observers I think. However, a closer look at the data invites a different interpretation. The specific metric being graphed wasn’t explicitly cited in many references to the research. Too bad, because the graph compares the percentage of randomly surveyed banked consumers over time that use the branch or mobile channel in the past week. A graph showing past three month or past twelve month usage would be rather different. It would show that a much higher percentage of banked consumers visit branches. They do – just not in any given week, day or hour! Usage intervals are longer in the branch - shocking!

The enduring relevance of the branch channel is abundantly clear in Federal Reserve Board sponsored research, Consumers and Mobile Financial Services, conducted annually since 2011 and most recently published in March 2016. The graph below from the March 2016 report compares surveyed past 12 month usage among the general banked population (all respondents) as well as smartphone owners. This equally credible research suggests that roughly one year ago, twice as many banked consumers use the branch and ATM channels than mobile banking. 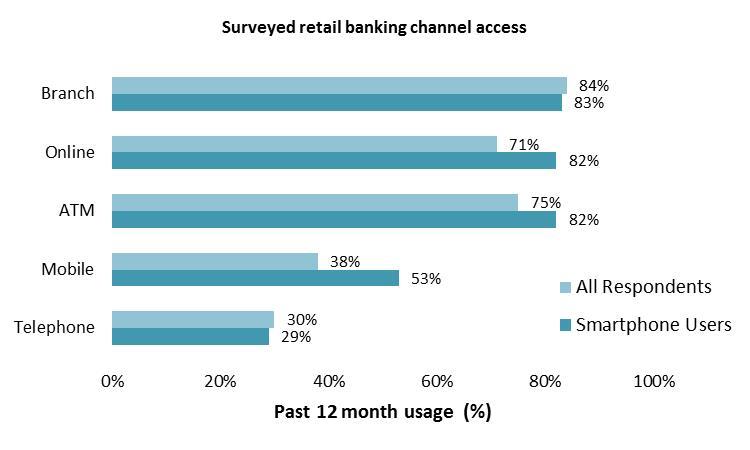 Both graphs present credible research. Only one fits a certain popular narrative.

The take away for most banks in my opinion is clear and transcends the silly, either-or debate: create and sustain a compelling customer experience across all points of engagement. As customer preferences continue to change, banks will need to continually adjust operating models. Easier said than done for sure. The needless controversy isn't helping banks get this job done.