Create a vendor selection project & run comparison reports
Click to express your interest in this report
Indication of coverage against your requirements
A subscription is required to activate this feature. Contact us for more info.
Celent have reviewed this profile and believe it to be accurate.
27 April 2017
James O'Neill

I like analogies because they can inject simplicity into the most complex discussions of financial technology, and make abstract concepts become more concrete and accessible to the casual fan of technology. My favorite and I believe useful analogy for banking system engineering is that of automobile engineering, an industry that has a similarly colorful past and has been marked by fits and starts of innovation over the past 120 years.

Fast forward to 2017 and the launch of the new Ford GT, a modern-day supercar with a heritage dating back to the early 1960s, when the Ford GT40 won the grueling 24 Hours of Le Mans four times in a row. The new GT has a starting price of $450,000 before options, creating a very exclusive club of future GT owners when production began last December. The Ford GT showcases Detroit's recent focus on platform engineering -- the configuration of common unibody structures and drivetrain components to create unique products that can appeal to disparate customers.

In the case of the Ford GT, platform engineering has been taken to a new extreme. Powering this new supercar is a retuned version of the workhorse 3.5L six-cylinder EcoBoost engine that powers the pedestrian Ford Transit commercial van, the Explorer and Expedition SUVs, and the Flex crossover as well as several Lincoln models. In these applications the engine tops out at 380 horsepower, which is impressive but hardly qualifies for world-class supercar status.

In the case of the setup for the GT, the same basic EcoBoost engine has been retuned to generate 647 horsepower, enough to propel the GT from zero to 60 miles an hour in just over 3 seconds. The fact that a single engine -- albeit in modified form -- can power a $20,000 van and a $450,000 supercar is testament to the power of platform engineering, the new architectural model that is widely used by Detroit today and is largely responsible for driving new innovative models for consumers, and new levels of profitability for the automakers.

The same architectural strategy is being employed by bank technology giant FIS, who held its 2017 FIS client conference two weeks ago in Orlando. 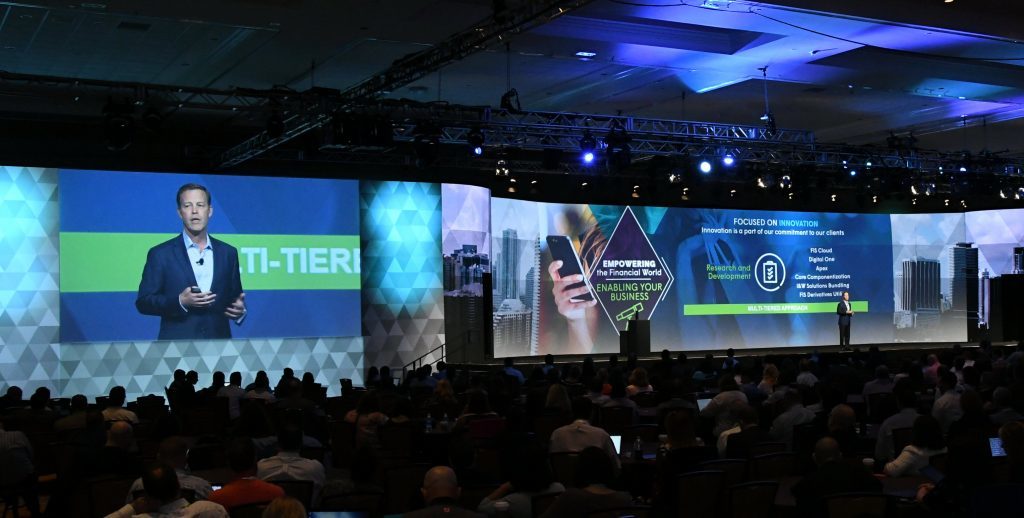 Most industry observers have focused on FIS’s preoccupation of late with its integration of the SunGard corporate banking and capital markets products with FIS’ existing retail-oriented bank IT solutions. While this focus is understandable, it has obscured the fact that that FIS continues to drive forward its own platform engineering strategy, an enterprise architecture strategy that will in time allow FIS to capitalize on its position as owner of a large stable of core banking platforms – from the large bank Systematics platform to the Horizon community bank platform, and all bank sizes and markets in between.

As Ford has shown with its 3.5L Ecoboost engine, FIS's long-term goal is to create build-once, deploy-everywhere core banking components that can be configured in various ways to support the need of a small community bank, boutique wealth manager, or a high-scale retail bank. FIS’s core banking "brands" (Systematics, Horizon, IBS, Profile, etc.) won't be going away anytime soon, but what these solutions look like under the covers will change, as individual silos of code will give way to common enterprise banking system components that align to these brands through differentiated bundles of features, functionality, pricing, and service.

The glue that will connect FIS's collection of existing systems and newer enterprise components is a growing library of system APIs that are catalogued and distributed through a new enterprise API Gateway. The API Gateway not only offers RESTful services to third-party applications (like an online banking or mobile payment services), but also supports integration between FIS's own individual systems.

Let's say you're a Miami-based community bank that would like to serve the deposit needs of high-wealth international clients? You can contract for FIS's flagship outsourced banking solution IBS and pull in foreign currency account functionality through an API call to FIS’s multi-currency Profile core banking system. Retail delivery systems like branch, teller, and call center would continue to function as they currently do, so from the bank’s perspective it would appear that the old workhorse IBS suddenly developed multi-currency capabilities.

Over time, the old model of a bank licensing a discreet software stack will give way to a menu–driven model in which the bank's precise requirements are met though constructing a composite of functionality from a number of FIS solutions, presented to the bank and its clients through a single UI and providing seamless integration through the API Gateway. This is FIS's version of Ford's platform engineering strategy, the technique that allows a simple utility van and a $450,000 supercar to be powered by the same basic engine.

By showcasing the API Gateway at the 2017 Connect client conference, FIS has signaled to the market that it has moved from the concept-phase to the implementation phase of its enterprise strategy for core banking systems. While it will take a number of years before FIS's vision begins to manifest itself through consistent product delivery, the approach makes sense.

In fact, it makes a LOT of sense.

Through increasingly bold acquisitions over the past 15 years, FIS has established itself as an industry leader primarily in terms of market-share. What is welcome news is that FIS is apparently not satisfied simply with market leadership, and is seeking to assert newfound technological leadership as well. The devil is as always in the details, execution is key, and all of the other management truisms apply here, but my instinct is that this can be big, and I wouldn’t bet against them.