Bemoaning the Decline in Branch Foot Traffic: It Could be Worse!

Create a vendor selection project & run comparison reports
Click to express your interest in this report
Indication of coverage against your requirements
A subscription is required to activate this feature. Contact us for more info.
Celent have reviewed this profile and believe it to be accurate.
5 February 2014
Bob Meara
Banks and credit unions have been bemoaning the decline in branch foot traffic for some time now. In part, this is a result of widespread and accelerating consumer preferences for digital channel interactions. In a 2012 Celent survey of North American financial institutions (an effort we intend to repeat in 2014) , nearly half of respondents expected a 10% to 25% runoff over the next five years. Many expect a higher rate of decline. 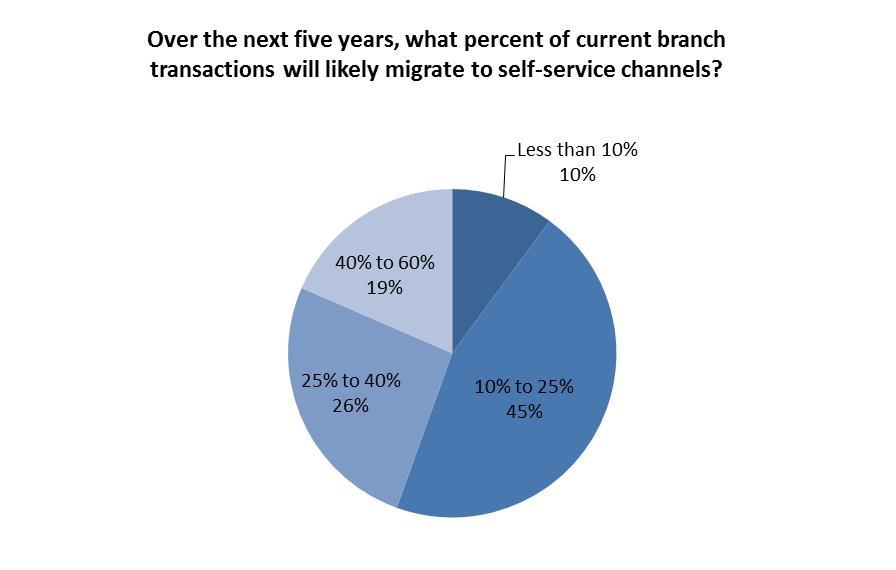 Source: Celent survey of NA financial institutions, July 2012, n=132 Data collected by Financial Management Solutions, Inc. (FMSI) among its sizeable client base of small and midsize financial institutions suggests an annual decline of around 3% over the past three years. Declines are likely steeper among large banks resulting from significant digital channel investments. It Could be Worse…If banks are struggling to accommodate declining branch foot traffic, other retail segments have it much worse. According to ShopperTrak, a leading analytics vendor to the retail industry, even as U.S. retail sales rose about 3% over the November – December 2013 holiday period, foot traffic declined 15%. December 2013 was particularly hard-hit, with foot traffic down 18% from December 2012. Why this is occurring is no mystery. The good news for retailers is that sales growth has returned, somewhat. The long-term picture, clearly driven by economic trends, is cautionary, with year-over-year growth rates eroding since the early 1970’s. Retailers got only about half the holiday traffic in 2013 as they did just three years earlier, according to ShopperTrak, which uses a network of 60,000 shopper-counting devices to track visits at malls and large retailers across the country. The larger retail picture makes banking’s misery look modest.

Source: FMSI, ShopperTrak National Retail Sales Estimate(NRSE ®) used with permission So what will the future hold? Where are we on the inexorable transition from brick and mortar shopping? Look at any forecast; omnichannel banking has just begun. What banks should do in response will be the subject of my next blog.