Predictions of Christmas past

Create a vendor selection project & run comparison reports
Click to express your interest in this report
Indication of coverage against your requirements
A subscription is required to activate this feature. Contact us for more info.
Celent have reviewed this profile and believe it to be accurate.
23 December 2015
Craig Beattie

The speed of technology change is presently both amazingly fast and disappointingly slow. This paradox arises from seemingly huge shifts in technology regularly occurring over the last decade and a half but slow realisation of these in industry. Of late I have personally felt that things aren’t moving quite as quickly as I expected. Since we’re at the end of the year and the holidays are a great to reflect and review how things have gone I thought it worth going back a little and looking at some of Celent’s predictions from 2012. The image below summarises some of the predictions Celent used to highlight just how much change could occur in the following eight years. How much of it has proven to be accurate? 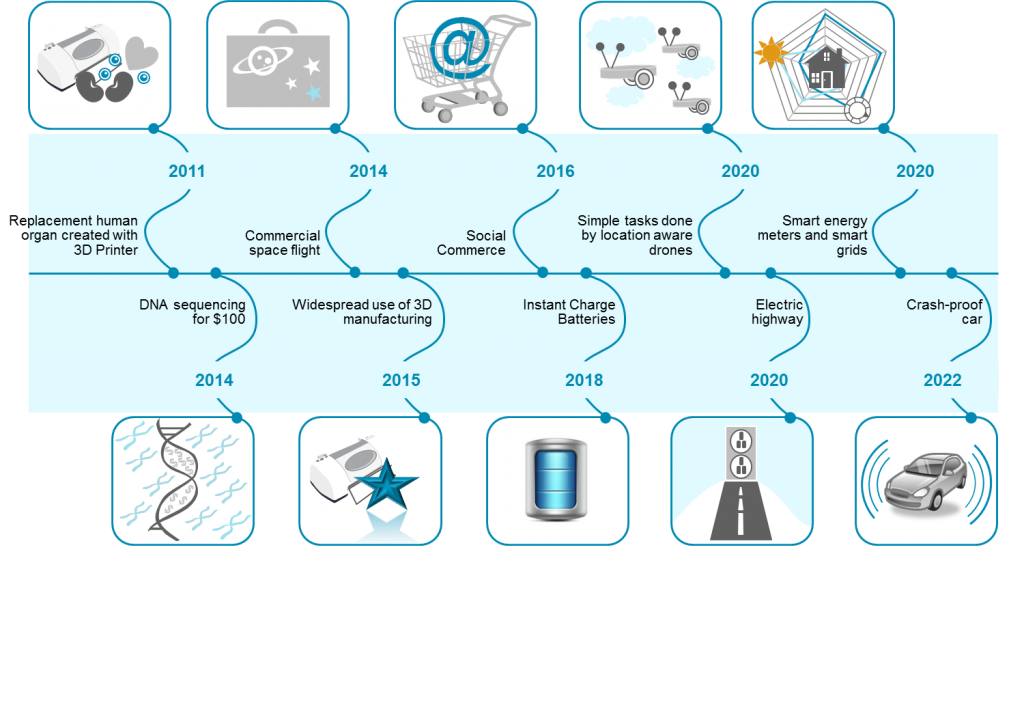 In this case the ambiguous commercial space flight referred to the then-likely space tourism although the efforts of SpaceX have pre-empted the space tourism industry by some years. SpaceX was the first private company to complete a delivery to the International Space Station in May 2012 and made a delivery beyond Earth’s orbit in 2015.

Widespread use of 3D printing was another suitably ambiguous phrase. In 2015 every home certainly doesn’t have a 3D printer although the devices are widely used in prototyping activity and are regularly found in increasingly popular innovation labs. The price of 3D printers is coming down to the level where other devices such as home printers and microwaves started to become popular – but the killer application is perhaps missing.

Social commerce referred to the seemingly inevitable integration of retail directly into popular social platforms. While retail websites have adopted social features Facebook has not surpassed Amazon in terms of retail, indeed the leading social networks are still advertising platforms and not retail platforms, despite rumours over the last 3 years social networks still don’t have payments integrated in. A prediction firmly not realised.

As regards the battery technology the insta-charge batteries are still not here, whilst they are an area of active research. Similarly the idea of highways capable of charging electric cars via induction is still at concept stage – with the adoption of electric cars having been slower than some expected with the popularity hybrids. There’s still time for these predictions to come about but they feel more like a bet than a certainty now. As regards drones executing simple tasks this is already being widely discussed, regulated and piloted in multiple countries.

The concept of pizza deliveries by drone – a particular favourite of mine, has already been piloted in multiple cities. Smart energy meters and grids was an early expression of the Internet of Things technology beyond telematics in cars. This is increasingly finding its way into mature markets with multiple insurers in both the US and Europe offering insurance based on devices in the home.

Finally, the crash proof car - the topic of Donald Light’s report on the end of auto insurance. It felt far too early to say driverless cars would be ubiquitous by 2022 so this was a safer bet. While it’s a strong statement to say a car is crash proof we have already seen the rise of testing of autonomous cars as well as multiple car manufacturers underwriting the activities of their vehicles while in autonomous mode. We are already seeing manufacturers literally willing to bet their vehicles won’t be responsible for crashes on todays roads.

Perhaps then, things are moving swiftly and Celent’s wild predictions of 2012 aren’t that far from the mark. Also of comfort to me is how members of the insurance are directly involved in some of these initiatives, where they are relevant. If you get time to think back on the year, I would be curious on your views. Has technology change sped up? Slowed down? Surprised? Disappointed? Where do you think it will head next? Celent has it's thinking cap on already and some of these topics will be discussed in our events, What if.... and Celent's 2016 Innovation and Insight Day, although we'd surely love to hear your views.