The diversity of payments in the US

Create a vendor selection project & run comparison reports
Click to express your interest in this report
Indication of coverage against your requirements
A subscription is required to activate this feature. Contact us for more info.
Celent have reviewed this profile and believe it to be accurate.
19 May 2016
Zilvinas Bareisis

As a payments geek, I am always curious about payment experiences in various parts of the world. In the last month I had a couple of trips to the US - to New York and to New Orleans - and they just reminded me how diverse the US payments environment is. And I am only talking about the physical POS; I haven't really ordered anything online or in-app while I was there.

First, a few observations around EMV. As I live in the UK, all my cards are Chip and PIN, and the US market has been migrating to EMV for a while now. Of course, the migration can't happen overnight - some merchants have already upgraded their terminals, but many haven't yet. Also, there is no mandate in the US to use offline PIN, so "chip and signature" EMV cards are common amongst the US issuers. As an end-user, I experienced a full gamut of payment scenarios:

A number of merchants in New Orleans had a Clover POS station. It looked really sleek on retailer desks and transactions seemed fast and easy. I asked a couple of them what they thought of it, and they all said they were very happy with the device, its looks and ease of use.

As a side note, American Express cards seem to be far more widely accepted in the US. In Europe, I got into a habit to double check at new places if they take Amex; in the US, that seems unnecessary.

Of course, it's no longer just cards. US was the first market in the world to see the launch of Apple Pay, Android Pay and a number of other digital wallets. The challenge for many of these wallets is the lack of places where they can be used, as contactless terminals remain relatively rare, albeit growing. However, when they can be used, they work very well. The biggest advantage that I can see as the UK user of Apple Pay is that in the US I can use Apple Pay for any transaction, whatever the amount (as long as my issuer is happy to authorise it). I had no problem paying for a taxi ride from New York's JFK airport to downtown by Apple Pay ($70+ fare with the tip). In the UK, Apple Pay and Android Pay (which has just launched this week) are subject to the same contactless card transaction limits and can only be used for transactions of £30 or less. Again, we expect this to change, as contactless terminals get upgraded.

I was also intrigued to see a PayPal acceptance badge at one of the POS terminals. I asked the cashier if it was a popular payment method amongst their customers. The cashier said that it seemed new to him, and that he personally had yet to see anyone trying to use it. I must admit, I am a fan of the PayPal wallet and use it whenever I can, but nearly all of my transactions are online/ via a mobile app. This time, I only noticed the PayPal sign after I already started paying by card, so can't quite report on the actual experience...

And yet, cash remains hard to beat, with many places only accepting cash. I refrained from visiting any of the dodgier establishments on New Orleans' Bourbon Street, but I didn't even had to in order to experience the power of cash. Most sellers in the French Market clearly prefer cash; getting into (jazz) Preservation Hall is "cash only" at the door, and while not every place has the sign as artistic as the one in the picture below, "cash only, one drink minimum" was a common mantra of many bars with live music. 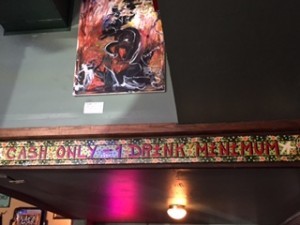 Clearly, there is a lot of payments innovation in the US. Various wallets and innovations in POS contribute to the diversity of end user experiences. Such diversity is a good thing and if anything, it will only increase, as customers will have increasingly more ways to pay. And as the migration to EMV continues, the undesireable kind of diversity should reduce as well.