Regulators will hug their blockchains - takeaways from Consensus 2016

Create a vendor selection project & run comparison reports
Click to express your interest in this report
Indication of coverage against your requirements
A subscription is required to activate this feature. Contact us for more info.
Celent have reviewed this profile and believe it to be accurate.
4 May 2016
Michael Fitzgerald 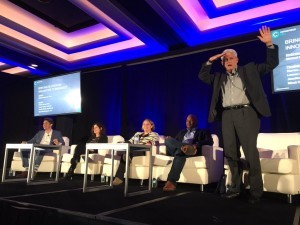 "Show of hands, how many people don't know insurance at all?"

I attended the blockchain (BC) conference Consensus2016 this week and came away with some enhanced perspectives about the technology and its market. The ability to immerse myself in the subject, hear multiple points of view, and learn about different projects was extremely valuable. Here are my highest level takeaways along with some general observations.

Regulators will love their blockchains
The transparency and audit trail capabilities of BC will reduce frustration, lower costs, and increase the effectiveness of regulators. Delaware’s announcement to move selected regulatory processes to the BC is an early recognition of this potential.

Benefits beyond the technology
The power of BC to eliminate counterparty risk, stop reconciliation, and increase efficiency were discussed repeatedly, but I also noted a few subtle, nuanced, and powerful benefits related to the BC development process. The most significant examples are the benefits that arise when multiple organizations partner to build a shared BC. Because the companies are building a common automation platform, their joint development results in a single set of code to automate contracts and identical data definitions. This eliminates the unintended consequences that currently result from a traditional approach -- where organizations agree on legal terms but then automate them separately. I am now looking at BC with one eye on what the tech delivers and one on what the process around it yields.

Nascent, but sufficient to test with
No doubt the platforms will continue to develop, but based on reported activity in capital markets, banks and insurers, the tech is moving forward in leading corporatations, most in a testing mode. One insurer offered an intriguing insight based on their experience to date. They found as they started testing, their use cases all dealt with processes which already have existing automation solutions in place, with the goal of efficiency/cost improvements. However, they found that they were not getting traction/attention from their senior executives that they expected and needed. They have since pivoted and are now focusing their BC testing on problems that do not currently have automation solutions in place. (by the way, this insurer is another example of a firm which is using its innovation infrastructure to execute their BC tests. They are being done in their innovation lab under the governance in place for experimentation projects -- see my previous blog about a similar approach taken by John Hancock.)

Evangelism
There are strong emotions associated with this technology. The implementations that deliver financing and banking services to developing economies, or that improve health care, certainly warrant an emotional reaction. However, when I hear comments like “BC technology’s impact will be as significant as the railroad in the 1800s,” my hype alarm goes off. I suppose I haven’t been indoctrinated yet, but neither have the majority of financial services executives.

Market transition
Suppliers are changing from geeks to suits, from startups to more established tech and consulting firms. In some comments during a number of presentations and occasional tweets and audience reactions, I detected a curious, and unhelpful, undercurrent of antagonism towards this shift. The economics of BC will inevitably move it to the enterprise. In fact, its full promise cannot be realized without this change. I am confident that virtually everyone attending a conference like Consensus2016 wants to see the tech reach its potential, but, as a first time attendee, it sure seemed that not everyone was acting that way. I am looking forward to catching the vibe in next year's show.

Kudos to the organizers Coindesk for developing a solid, varied program and for executing it well.