The Enduring Importance of Physical Engagement in Retail Financial Services

Create a vendor selection project & run comparison reports
Click to express your interest in this report
Indication of coverage against your requirements
A subscription is required to activate this feature. Contact us for more info.
Celent have reviewed this profile and believe it to be accurate.
14 February 2017
Bob Meara

I take no issue with the growing importance being placed on digital in financial services. Indeed, it does not take extensive examination to see, in Wayne Gretzky’s words, “where the puck is going”. Digital needs to be a top technology priority among financial institutions – particularly in highly digitally-directed markets such as North America and Western Europe. But, that doesn’t mean physical engagement is unimportant. In my opinion, in-person (physical) engagement will be of lasting importance in financial services for at least three reasons:

1. Most consumers rely on brick and mortar for commerce and will continue to do so.

2. Most retail deposits still take place at the branch.

3. Most banks do not offer a decent digital customer acquisition mechanism

Most Consumers Rely on Brick and Mortar for Commerce

This week, comScore released its most recent measurement of digital commerce. It was truly exciting, with Q4 2016 m-commerce spending up 45% over 2015! But, even with that astonishing year-over-year growth, m-commerce constitutes just 21% of total e-commerce. And, with two decades of e-commerce, total digital commerce comprised just ten percent of total commerce in 2015. Plenty of consumers still like stores. 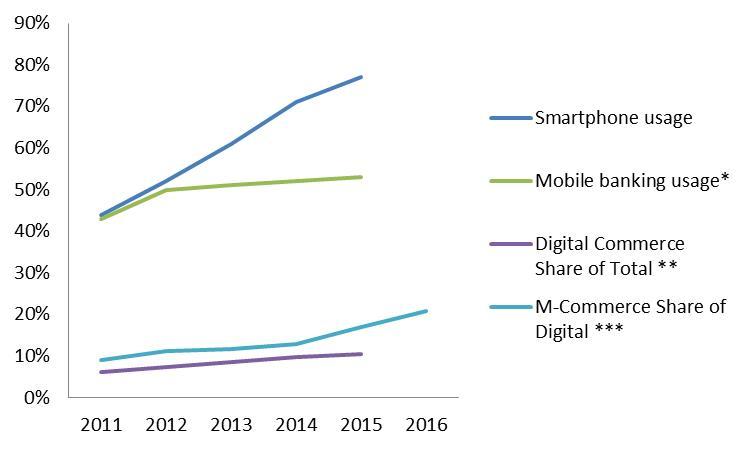 Digital is not equally important across segments. Books and music, for example, are highly digital. Not so much for food and beverage. I’m being simplistic for brevity, but the data suggests that most commerce will remain tied to the store experience – at least in part – for the foreseeable future. I don’t think financial services will be an exception.

Most Retail Deposits Still Take Place at the Branch

Banks are keen to migrate low-value branch transactions to self-service channels, and there is perhaps no better low-hanging fruit than check deposits. Yet, with a decade of remote deposit capture utilization behind us, a January 2017 survey of US financial institutions (n=269) clearly shows that the majority of retail deposit

dollar volume still takes place in the branch. Like it or not, the branch remains a key transaction point for many consumers and small businesses. Sure, the trend lines support digital transaction growth (thank goodness), but we have a long way to go – farther than the hype would suggest. 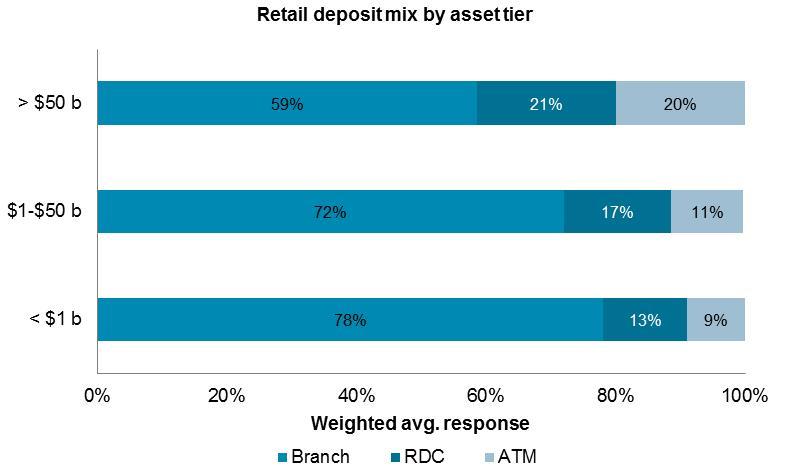 Even as banks would love to acquire more customers digitally, most aren’t well prepared to do so. Unlike most every other retailer on the planet, most banks initially invested in digital banking for transaction migration, not sales. That is changing, but not quickly. The mobile realm needs the most work. In a December 2016 survey of North American financial institutions, Celent found that large banks, those with assets of >US$50b, had made noteworthy progress in mobile customer acquisition capability since the previous survey two years ago. Smaller institutions lag considerably. 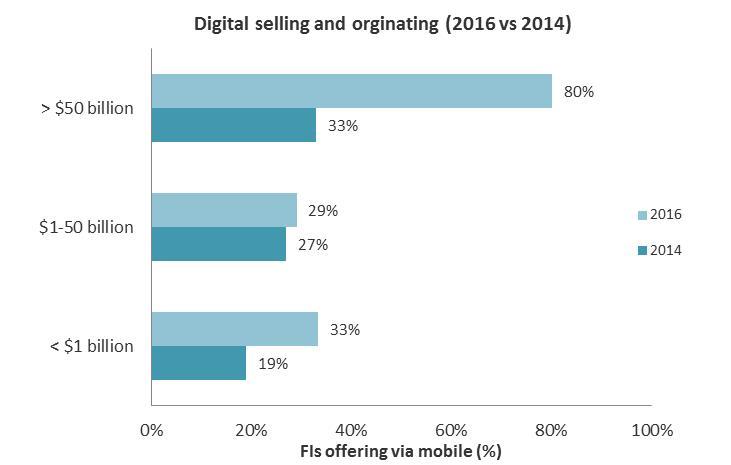 For these reasons, branch channels are getting a make-over at a growing number of financial institutions, with the objective of improving channel efficiency and effectiveness – effectiveness with engagement, not just transactions. Celent is pleased to offer a Celent Model Bank award in 2017 for Branch Transformation. We’ll present the award on April 4 at our 2017 Innovation & Insight Day in Boston. In addition to presenting the award trophies to the winners, Celent analysts will be discussing broader trends we’ve seen across all nominations and will share our perspectives why we chose those particular initiatives as winners. Make sure you reserve your slot here while there are still spaces available!