Create a vendor selection project & run comparison reports
Click to express your interest in this report
Indication of coverage against your requirements
A subscription is required to activate this feature. Contact us for more info.
Celent have reviewed this profile and believe it to be accurate.
10 March 2010
Bob Meara
Recent changes in Reg. E requiring banks to institute mandatory opt-in provisions for courtesy overdraft programs weren’t a big hit with most banks – for good reason. NSF fees comprised 74% of total fee income collected by US banks in 2007 according to the FDIC, amounting to nearly $30 billion. Right or wrong, NSF fees grew to become an important contributor to checking account profitability among US banks. 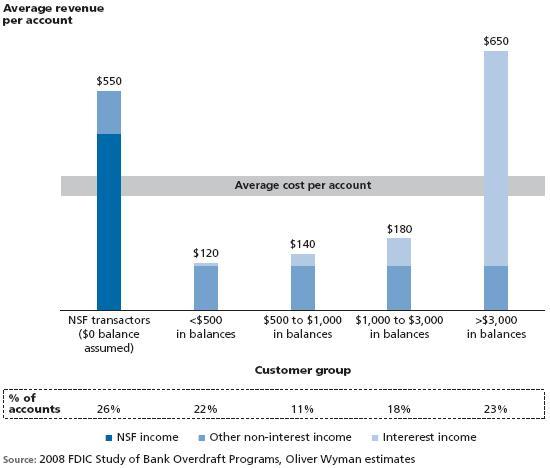 This occurred alongside the growth of “free checking”. The end result was a bifurcated model for checking account profitability. A small number of high fee and high balance customers have subsidized the majority of low balance customers with limited NSF behavior. The latter customers used to pay monthly maintenance fees, but those vanished with the advent of free checking - along with the perceived value of bank services. The end result was unfortunate in a way. A majority of banking customers received banking services essentially free of charge and didn’t appreciate it, while a small minority of customers paid significant NSF fees (ostensibly due to their own negligence) and ended up offended. In addition, differentiating became difficult with most every bank offering generic free checking. There has got to be a better way to do things. Bank of America announced significant changes in its overdraft policy this week. Going well above the call of duty, Bank of America announced it will effectively eliminate overdraft fees caused by debit card transactions (through denial of those transactions) while preserving courtesy overdraft on check or ACH transactions in a highly transparent manner. Customers will also be able to obtain emergency cash at ATMs with explicit fee notices. Moves like this are likely to go a long way in restoring trust and confidence among consumers. Good brand building in other words. But, there’s more to this opportunity than brand building along. It may come to play that free checking as US consumers have known it will largely disappear as a result of the Reg. E changes. Opinions differ on the matter, but the associated revenue loss will be certain – and substantial. Many banks will be quick to seek alternative fee revenue. Savvy banks have a golden opportunity to use the heightened public awareness of bank fees to their advantage. The debacle can instead become a dream come true – an opportunity to redefine their value proposition. It won’t be easy, but opportunities like this don’t come around very often.