Create a vendor selection project
Click to express your interest in this report
Indication of coverage against your requirements
A subscription is required to activate this feature. Contact us for more info.
Celent have reviewed this profile and believe it to be accurate.
We are waiting for the vendor to publish their solution profile. Contact us or request the RFX.
20 October 2016
James O'Neill

It's hard to believe that an entire month has gone by since Oracle OpenWorld in San Francisco -- but baseball fans will have noticed that things have been a bit hectic here in Chicago of late. Ironically, the Chicago Cubs clinched a playoffs berth on September 18th, the very day that Larry Ellison officially opened OPEN World with his first of several Keynote presentations.

My primary motivation for attending OpenWorld was to get an update on Oracle's two banking platforms -- the new flagship Oracle Banking Platform (OBP) aimed at large retail banks and its stable mate FlexCube, the universal banking platform deployed by nearly 600 banks globally. After three days at OpenWorld, I realized that the real story of interest to banks is Oracle's emerging cloud story, which coupled with its existing core banking applications business puts them in areally interesting position to transform the core banking systems market.

Now a robust 72-year-old, Larry joked with the audience about being prohibited from climbing the stairs to the Keynote stage, but he still exhibits the intense competitive burn that served his company well during the ERP battles of the 1980s and 1990s. The difference is that these days, he's less focused on IBM or SAP as he is two new challengers: Amazon Web Services (AWS) on the IT infrastructure side and WorkDay on the applications side.

Of course, what AWS and WorkDay have in common are that they are both businesses with long-term prospects predicated on the continued growth and development of cloud services. Larry's first Keynote noted that we are witnessing generational change as companies move from "lots of individual data centers" to a smaller number of "super-data centers called Clouds". In a separate presentation, Oracle CEO Mark Hurd shared Oracle's view that within the next ten years, 80% of corporate-owned data centers will have been closed, with the remaining data centers running at 20% of today's capacity, running legacy workloads that are not easily ported to a cloud services environment (hey COBOL -- I think they're talking about you!). 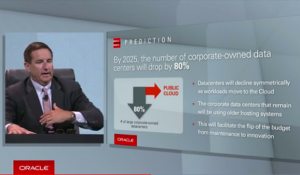 According to Larry, Oracle's "overnight success" in cloud services began ten years ago when it started reengineering its original ERP products -- licensed software designed primarily for the on-premise market -- into a new multi-client, multi-tenant architecture, as befitting a company that was pivoting to the emerging SaaS model. At OpenWorld, Larry shared how Oracle was extending its original SaaS business to embrace both the Platform as a Service (PaaS) and Infrastructure as a Service (IaaS) models -- putting AWS, Google, and Microsoft all squarely in Oracle's competitive sights.

Of the three, AWS appears to be the primary target of Oracle's competitive ambitions: Oracle's new "Gen2" IaaS platform offers a virtual machine (VM) that offers twice as many cores, twice as much memory, four times as much storage, and more than ten times the I/O capacity of a comparable AWS VM. But there is a catch, according to Larry: "you have to be willing to pay less" than what AWS charges for a comparable VM. (While AWS might take issue with Larry's claims about performance and value, what is clear is that Oracle is planning a serious competitive challenge to AWS's supremacy in the IaaS race.)

In Larry's words, "Amazon's lead is over. Amazon's gonna' have some serious competition going forward." 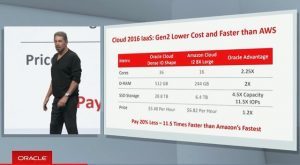 This represents great news for the growing number of banks that have gotten past the question "Why cloud?" and have moved onto the more interesting question "How cloud?". For the largest banks like Capital One that have significant IT development capabilities in-house and with the willingness to experiment with new technologies, AWS makes a lot of sense. Banks can roll their own code, spool up a VM, and off they go. Capital One's cloud journey has been so compelling in fact, that the bank is in the process of closing down 5 of its 8 data centers while swinging many workloads to AWS. Most banks, however, are not Capital One.

For the mere mortals among us -- banks coping with practical limitations on their ability to develop and host banking apps -- having an IT partner with demonstrable experience on the application side and the infrastructure side can represent a real game changer in terms of the bank's appetite to make a leap into cloud-based banking services. While some banks have in the past been a bit overwhelmed by Oracle's ambitious sales pitch featuring its all singing, all dancing suite of integrated applications ("that's very impressive, but I only want a G/L!"), with Oracle's new IaaS offering a bank could mix and match Oracle applications (offered via SaaS) with third-party and in-house developed systems. That potentially a game changer for banks interested in cloud services, but overwhelmed by the complexity of going it alone with a public cloud provider.

That brings us back to OBP and FlexCube. OBP is a recently built Java-based core banking solution built for the needs of large scale retail banks. As such, OBP is aimed squarely at mainframe-based core platforms like Hogan, Celeriti and Systematics. FlexCube is a universal banking platform and has also seen some renewed investment from Oracle in the last few years. While today its primary market appears to be international banks, as a modular solution FlexCube can address specialized needs in the US market like cash management and trade finance. OBP and FlexCube continue to compete in the global core banking systems market on their own terms -- with OBP having some recent success as a foundation for a new digital banking platform for Key Bank (Cleveland) and as the foundation of a complete core replacement project at National Australian Bank (Melbourne).

For larger banks intrigued by the promise of cloud services, but daunted by the complexity of building and operating their own environment, the opportunity to pull down an OBP license that is hosted in the Oracle Cloud while dragging other applications from their private data center to Oracle's IaaS platform could help achieve in one move the twin goals of core banking system and data center transformation. That's a rare 2-for-1 in a world where a widely-held truism is that every IT decision involves trade-offs among alternatives.

According to Larry, Oracle's annual revenue run rate for cloud is currently about $4 billion. Amazon recently announced that its revenue run rate for cloud services was north of $10 billion while just yesterday Microsoft announced its own revenue run rate for cloud has approached $13 billion. These are undoubtedly different businesses (AWS is more or less pure-play IaaS while Microsoft skews towards SaaS by virtue of the strength of its Office 365 business), so I won't pretend to make any apples-to-apples comparisons. The point remains that while it's still early in the cloud ballgame for Oracle -- with deep financial resources, an impressive portfolio of banking applications, and Larry's intense "Will To Win" against the current market incumbents -- bank CIOs need to pay close attention to what is going on in Redwood Shores.