Mobile RDC: What’s the hold up?

Create a vendor selection project & run comparison reports
Click to express your interest in this report
Indication of coverage against your requirements
A subscription is required to activate this feature. Contact us for more info.
Celent have reviewed this profile and believe it to be accurate.
11 August 2009
Bob Meara
Now that the dust has settled on remote deposit capture, RDC, for commercial customers, a relatively small number of financial institutions are looking towards measured expansion of the technology to include wealth management, micro business and private banking clients. Some even contemplate making RDC available to a broad consumer base using suitably equipped mobile phones as the image capture device (a.k.a. Mobile RDC). Yet compared to the meteoric adoption of commercial RDC, this subsequent market expansion is moving at a snails pace. What’s the hold up? More specifically, beyond a handful of financial institution pilots, why have so few banks launched initiatives? The most commonly cited adoption barrier is risk. In particular, some argue, the risk of users depositing the same item more than once. In addition, the FFIEC guidance, Risk Management of Remote Deposit Capture, January 2009, admonishes financial institutions to undertake careful risk mitigation and controls when deploying RDC, including determining which customers are suitable for RDC, training them appropriately, and developing appropriate systems monitoring and reporting capability. Some financial institutions have concluded that attaining all these requirements amidst serving a customer base as potentially vast as the consumer or small business market is untenable – or at least more trouble than it might be worth. Given the state of things in financial services, who could fault a financial institution for being risk adverse? Yet, something tells me that risk is only part of the story – or worse, a convenient justification for inaction. The larger challenge for financial institutions contemplating adopting mobile RDC is what to do with all their branches. Over eighteen months ago, Celent surveyed over 150 commercial RDC deploying financial institutions and found that even then, in RDC’s formative years, a third of banks experienced a significant reduction in branch transaction volume as a direct result of RDC (Figure 1). Since that survey fielded, total RDC client adoption has more than doubled, displacing more branch traffic. A significant small business or consumer RDC initiative would have a more profound impact. 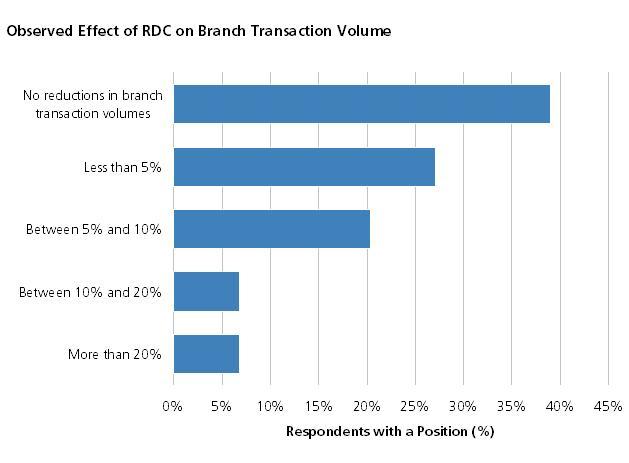 [/caption] We’re not prophesying the end of branch banking. Rather, we're suggesting that some amount of branch infrastructure reengineering is a likely prerequisite to enjoying a respectable return on investment in mobile RDC. Many banks already are grappling with declining branch profitability. Fixing that problem will likely be costly and protracted. Branch closures may stop the hemorrhaging, but systemic redesign is needed. In this context, a successful consumer RDC launch would exacerbate the pain already being felt and hasten the need for the really big task of branch redesign. This makes FFIEC compliance looks easy by comparison. RDC (mobile or otherwise) is, after all, a customer self-service channel. Unlike other self-service channels that have largely added customer transactions (yet with great benefit), RDC eliminates trips to the branch by definition. Check transactions remain the #1 reason banks have tellers. Mobile/consumer RDC could change that in a big way. That may be the big reason for hesitation at some banks.