IT Spending in Banking: A North American Perspective

Create a vendor selection project & run comparison reports
Click to express your interest in this report
Indication of coverage against your requirements
A subscription is required to activate this feature. Contact us for more info.
Celent have reviewed this profile and believe it to be accurate.
31 December 2008
Jacob Jegher

In a new report, IT Spending in Banking: A North American Perspective, Celent examines, analyzes, and contrasts the IT spending patterns of US and Canadian banks. While there is a decline in North American IT spending growth (from 3.1% in 2008 to 1.7% in 2009), absolute spending figures continue to rise. Even with unfavorable market conditions, 2009 spending is expected to reach US$50.3 billion in 2009. Absolute spending figures are still in the black for several reasons...maintenance spending makes up the lion’s share of the budget; spending on post-merger integration work is on the rise; and small and midsize banks will invest in IT in an attempt to gain market share.

While a few of the large Canadian banks have had some exposure to the financial crisis, it will have little impact on IT spending. Spending will continue to flow as most Canadian banks weather the storm and take advantage of their strong position in the North American banking market. Canadian banks’ IT spending will grow by 4.0% in 2009 to US$6.7 billion. 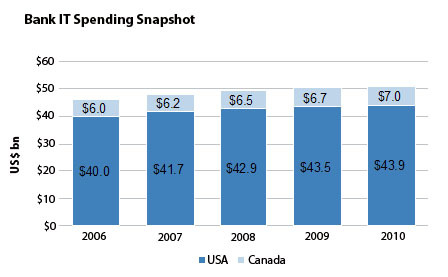 "The financial crisis and economic uncertainty have US banks tightening their belts. Large banks in particular are slashing budgets and placing significant emphasis on keeping costs under control," says Jacob Jegher, senior analyst with Celent's banking group and author of the report.

"This contraction will push numerous IT projects out of the picture and will make internal competition for IT resources that much greater. IT dollars will be hard to come by after compliance/regulatory spending and maintenance expenditures. Banks will be forced to be creative with their funds in order to make investments go as far as possible," he adds.

This report examines the regional breakdowns of retail versus wholesale spending, internal versus external spending, as well as spending on maintenance versus new investments. The report also outlines several key North American banking technology trends and growth areas for 2009.

This 28-page report contains 9 figures and one table. A table of contents is available online.